Growth-driven Design: Why Does It Cost So Much?

Over the years,  you have probably seen many articles circulating about Growth-driven Design (GDD) and the benefits the process has over traditional web design.

And If you haven’t, get with it! Read through our guide: What is Growth-driven Design? You won’t regret it.

Despite all of this content, one question commonly asked is: Why does Growth-driven Design cost so much?

While the cost of website redesign using GDD may be up to 20% more than a traditional redesign, it is important to understand the value a GDD project provides  a traditional website build.

Let’s look take a quick look at the GDD approach to website redesign vs the traditional to explain.

The following graph provides great insight into how the two processes affect the growth and impact of an organization: 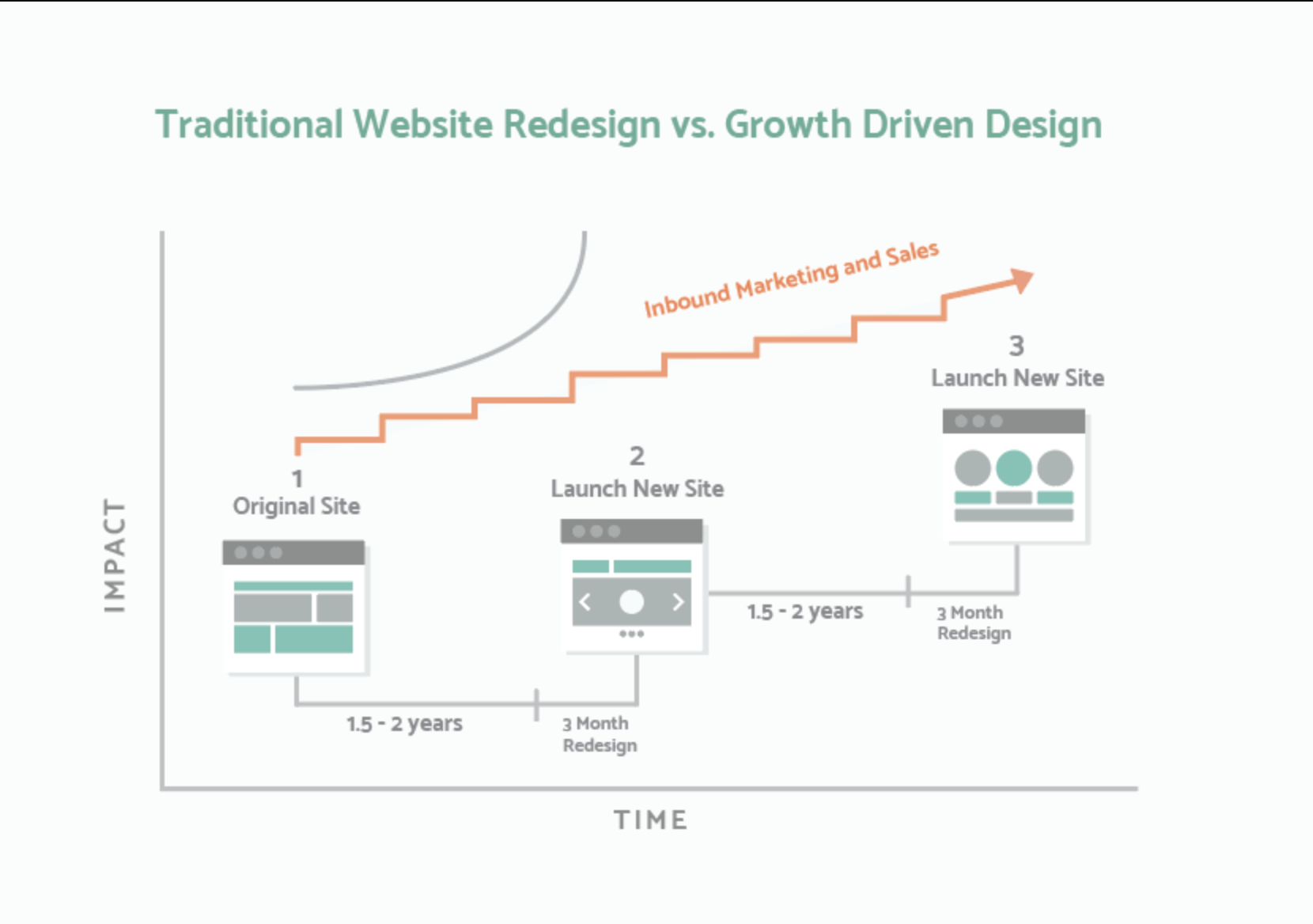 As illustrated, a traditional website redesign process consists of a large investment up front to design and build the website, a launch that creates impact in the market (hopefully) only to plateau until a new website is launch 2 years in the future.

While the initial launch may clearly provide an impact following the launch, the client is left with a site soon to become outdated and less-impactful,  thus forcing the business/organization to go through the process redesign process all over again in a few years time.

With the GDD approach, an initial “launch pad” website is launched within 4-6 weeks of the project start and is then iterated upon over a series of months based on user testing, the direction of the market, and needs of the consumer while, in turn, maintaining or increasing its impact on the market.

While the above provides a clear overview of the differences between GDD and Traditional approaches to web design, we need to fully explore the value of Growth-driven Design to understand the cost.

Below are three points to consider when you are trying to determine if the value of a GDD project outweighs the cost of one.

Let’s get right into it and address the monetary cost.

That’s the topic of the post, after all (and I’m sure what you’re waiting for!).

With traditional website redesigns, the cost can be anywhere from $10k to over $100k for a four-month build and launch.

This timeline means that somewhere within those four months, you will either be billed for one single payment or more commonly a portion to start the project and the final portion due upon completion.

Either way, you are obligated to pay the entire cost of the project within the four-month time period.

With Growth-driven Design, the project is quoted over a projected timeline.

Monthly payments will be determined based on the timeline and paid accordingly.

For example, if a GDD website redesign was projected to take six months and quoted $4,000, the total project would cost $24,000 and, let’s say, the traditional redesign process of the same website would take three months and cost $20,000.

The cost of traditional is less expensive, however, the GDD project is extending an additional three months which allow for more user testing, page launches, and tweaks to maintain a consistent impact on your market.

Growth-Driven Design isn’t simply about designing and launching a website (as is often with traditional web design), it’s about launching a “Launch Pad” site and working the GDD cycle.

What is the GDD cycle?

It’s all about experimentation -- creating a hypothesis based on user data and research, testing your hypothesis through landing pages or A/B testing, collecting data, and reviewing results.

If we apply this approach to the GDD timeline, the launch pad site is launched within 4-6 weeks of the project and following the launch, the GDD cycle begins.

At IMPACT, we define the GDD cycle as planning, developing, learning, and transferring knowledge.

Within this cycling process, your website grows through strategy and iteration, in turn, increasing the impact on your market.

By iterating through the GDD cycle, the “staircase” of impact effect occurs (as seen on the Traditional Website Redesign vs. Growth-Driven Design graphic above).

The staircase effect helps your organization have a continuous, and even increasing, impact on your industry and, over time, become seen as the organization the sets the standards for your competitors to follow.

Lastly and possibly the most valuable aspect of the GDD process is the education and skills your team learns compared to following the traditional website design path.

Since the success of GDD is measured by data, marketing and sales numbers, and your team will likely learn a lot about how users consume information and interact with your brand that can then be adapted to other areas of your marketing and sales strategies.

As analysis of your website grows and develops over time, your team will begin to see beyond the website as it is and into the future.

GDD encourages a forward-thinking mindset that provides space for your team to innovate rather than react to the market.

Getting Your Money’s Worth

While cost is a very important factor when considering the prospect of pursuing a Growth-driven Design project, it should not serve as the key driver of making such a decision.

The aforementioned points are just some of the immediate and long-term benefits your company and brand can get from a GDD.

Ultimately, any decision must be evaluated from every angle and any decision must align with your strategy and what will help you meet your objectives.  Perhaps a traditional website redesign may seem like the most cost-effective decision today, but tomorrow, GDD will prove it’s worth times over!

What Is The Growth-Driven Design Methodology?

What are Fundamental Assumptions in Growth-Driven Design?

By Luke Summerfield on February 9th, 2017

By Luke Summerfield on February 9th, 2017

How Will Growth-Driven Design Change the Game in 2016?

By Kathleen Booth on September 8th, 2015

By Kathleen Booth on September 8th, 2015

What is Growth-Driven Design?