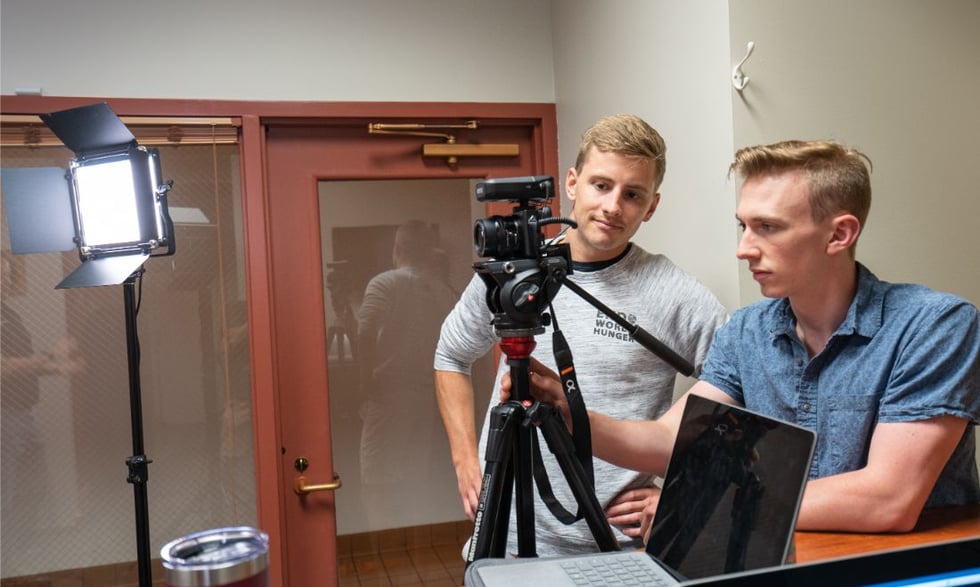 When hiring for a tech-heavy position, it can feel natural to gravitate towards candidates with prodigious technical expertise.

According to IMPACT’s video consultant Will Schultz, that’s a mistake.

An in-house videographer needs to run all aspects of your video production, and making people feel comfortable on camera is equally important to Final Cut Pro proficiency.

Me: When I approached you about interviewing, you said that you wanted to address hiring for soft skills when adding a videographer to staff. Why is this on your mind?

Will Schultz: This is, I think, the most overlooked part about trying to insource a videographer for a company that is not previously familiar with video production.

Companies that are new to video production often think that the most important thing to do is to bring in a video expert.

And oftentimes, a person that comes from a film school or a larger production set will commonly be overly specialized. Also, this person might come from a position that allowed them to be more introverted.

When you're hiring an inbound videographer that's going to come into a business, you don't want someone that's used to being the editor 90% of the time. Someone sitting in Adobe, on their laptop, not having to socialize and talk with people.

It's so easy to train hard skills. 90% of videographers now are self-taught on YouTube or Skillshare because the information is so readily available, plus the equipment has become more affordable and easy to use. It’s gotten to a point where you don't have to be an expert to create great video content.

It's much more important to hire for soft skills and then educate on the hard skills if needed, rather than hiring for someone that is a total expert in the technology.

Me: What are the soft skills you mean?

Will: Most of the time I see job descriptions for inbound marketing videographers talking about all the requirements of a candidate’s technical expertise — and that's just not the right X factor when you're looking for your videographer.

This is going to be overly generalized, but having somebody that's extroverted, that has the ability to lead conversation and is excited to do so with the new people — that’s what most companies don't know to look for in a videographer.

You have to think about what a production set actually looks like. It's a two-hour hangout: on one side is whoever you've just hired to be your videographer, and on the other side is somebody that's really uncomfortable with the whole situation.

A classic videographer can have all the boxes checked in the world, and you still might not get engaging content. It's going to fall flat because everyone can tell that the person that's talking is not engaged, or is way too nervous, or is reading from a teleprompter.

The videographer might not feel that it's their job to get the most out of the person that's in front of the camera.

The importance of pre-production

Me: In videography there is so much focus placed on post-production work, but it seems that the pre-production is even more important.

Will: Yes. People who come from other video worlds probably didn't have to do very much themselves. They were probably around a team of people who were used to being in front of the camera, and they didn't need to own the entire process.

They probably didn’t have to handle scheduling for a business, booking time with busy people.

A videographer needs to be someone that's going to put in time building rapport before they go sit down and turn a camera. It is their job to present people being at their best. They need someone that’s going to completely own the video production endeavor that a business is taking on, from commanding the scheduling process to building trust with everyone involved.

Me: How does a business hire for this?

Will: The first thing that I do is identify who is most likely going to be my on-camera subject matter experts, and I get a good feel for what I think those people will need in a videographer.

If I'm going to have a lot of subject matter experts who are engineers between the ages of 30 and 50 years old — and I know they're not going to be excited to be in front of the camera — I want to hire someone that's going to be excited about talking to those people and getting the most out of them, and is also what I'll call a culture fit with them.

Videographers need to be able to relate to their subjects, and vise versa. Sometimes that means similar age, similar interests, similar backgrounds to the people that they're going to be hanging out with.

Remember, that's really what a video production is: a two-hour hangout, oftentimes 1-on-1.

You’ve got to find someone who’s going to own that role and build connections with team members — and even make them enjoy the process and have some fun. That’s when you get genuine, trust-worthy, and engaging content.

Me: If you're asking them to interview team members who are broadly and diversely representative of many demographics, what are the general skills that you look for in the hiring process? Are there tasks that you can have them go through that demonstrate that skill set?

And then there are people who aren't afraid of being in front of the camera. Generally speaking, those are the people who will be able to have the charisma, the extroversion, the confidence to make a production experience fun and engaging for the people who are kicking and screaming, trying to avoid being in videos.

One thing I do when I'm hiring for videographers is give them a list of questions to make their own video interview with.

This is something that IMPACT actually did while I was being interviewed, too. They had me make a video answering about six questions — and this had nothing to do with production quality of the video I sent.

You tell them, this has nothing to do with the production quality. You could force them to film it on their cell phone, if it makes them more at ease.

We want to see how they are in front of the camera, answering questions. We want to see their ability to connect with people on a level that's going to make them excited having a conversation, regardless of whether the camera's on or off.

Me: How do videographers build this skill set?

Will: For a videographer that wants to turn into an inbound videographer for a business that's never done video before, get yourself in front of a camera and start to spark conversations with people that you don't regularly talk to.

Practice owning the frame of the video conversations that you're having. What I mean by this is, learn to take a comfortable amount of control in your entire video production processes. Prove that you are able to take charge of a video shoot in a way that a doctor does the moment you step into their office.

When a videographer has the ability to put people's minds at ease by showing that they are in charge of this situation, then the person that’s stepping into the studio knows that they can just turn their brain off and trust that everything else is going to be taken care of.

They have nothing to remember themselves, no reason to get lost in their own thoughts about this production. All that they have to do is go on “cruise control”, answer conversational questions from the videographer, and SMILE.

The videographer is like the doctor in the doctor's office. That is the goal.

Me: Do you think soft skills in general are overlooked in the tech industry?

Will: There's a general trend that the tech industry is becoming more and more approachable for anybody to pick up something and be able to do it themselves. Everything's becoming more simplified and easier to get into.

Thus, we no longer need these really technical people to do the technical work. This gives us a much wider spectrum of people who could do any given role really well.

Having a salesperson who’s just learned video is better than having someone who’s come from video and is now trying to learn how to operate in an unfamiliar business.

To me, culture fit and personality are as important — or maybe even more important — than a tech background that can be picked up in a field that is continually democratizing the way that education happens.

I have to give feedback to videographers every day. It’s easy to comment on something that's a black and white change for them to go do. It's much harder to talk to a videographer about how everything they're doing is right — other than how that on-camera talent is performing.

So often the videographers want to point that finger at who's on camera, and that's just not where the blame should go.

It's on the videographer to make them the best versions of their on-camera subjects — to look and feel good every time that they stand in front of the camera, and to have a good time doing it. That's half the battle of making content engaging. Make sure the people have fun while they're making it.

The best videographers can do that, and it’s not about technical skill — it’s about owning the endeavor, making people comfortable, and building internal trust.