Ad vs Inbound Agency: How The Shift Made Me a Better Web Developer 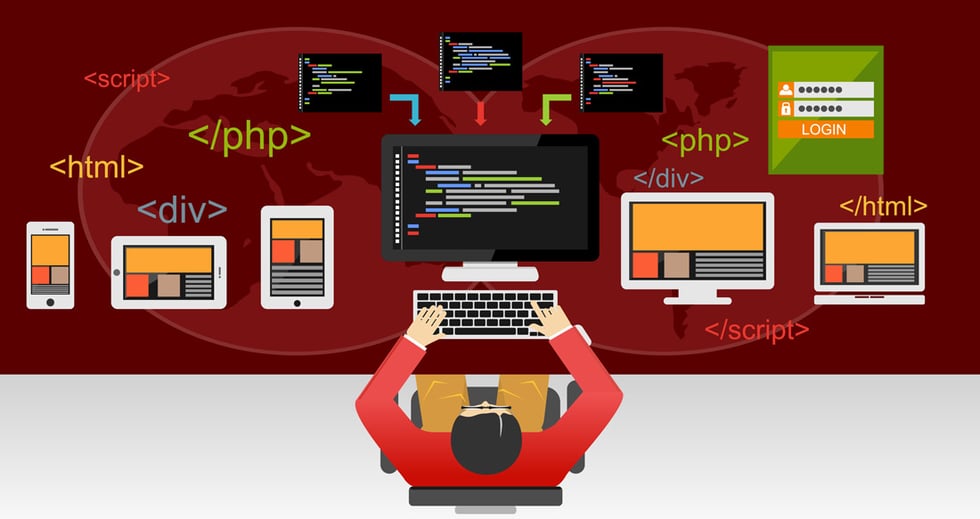 Back in early 2013, I landed my first web development gig at a small advertising/creative agency.

They do great work with pretty big names such as Hard Rock and Virgin, and when I was there they did a lot of campaigns promoting new TV specials and even hotels.

Needless to say, I was loving it and impressed, ( - and did I mention they had a keg in the office?!)

Even with all the good, I ran into some workflow issues, but I just chalked it up to me being a newbie to the game.

However, knowing what I know now, and being familiar with the Scrum framework, I realize it wasn’t just me. There was a problem with the system.

Now, I’m not going to go on and on in this post bashing my former employer. They are extremely talented and I have much respect for them (and that just wouldn’t be cool anyway).

They just did things differently and it was a huge learning experience.

Working for an agency is very different from working as an in-house developer for a company, in my opinion, at least.

In-house developers tend to have more cushion for experimenting, and just more time to deliver.

Working in an ad or marketing agency environment, you work for the clients who know what they want and expect you to deliver products or results on deadlines.

It’s a fast-paced environment and I’ve grown to love it -- but not all agencies are alike.

In the past three years, I’ve learned a lot as a developer, how I work best, and the differences between developing at an advertising agency and at an inbound agency like IMPACT.

A few years after leaving the agency, I decided to try my hand at something new in Inbound Marketing and HubSpot.

I was completely new to the Inbound world, but I figured it would be a great learning experience and help me grow as a developer.

After a couple position changes and freelancing for a bit, I was presented with an opportunity to come to IMPACT and I couldn’t pass it up.

During my onboarding time, I started thinking about how different this life was compared to the developer life I had back when I first started. Here are some of the biggest differences (and benefits) I’ve seen.

One of the biggest differences and advantages to my workflow now is using Scrum.

With Scrum, we are broken up into teams or pods as IMPACT likes to call them and every pod has a few account strategists, a designer, and developer.

This is super helpful when it comes to keeping things organized and streamlined. I work more closely with our pod’s designer than I have previously and with that, I am able to learn her techniques and style.

By knowing how she designs, I’ve been able to learn her expectations for functionality and structure, which speeds things up. Another benefit is if I need anything, like a new asset or an SVG, I can go right to her and see if she can help me out.

With the ad agency, we never worked closely with the designers, and they were even on a separate floor. So, frequently, I would just get a design from our project manager, and basically “dig in.”

If I had any questions on design or functionality, I would basically need to track down who designed it.

With this type of workflow, it was more prone to miscommunication between designers and developers or developers and clients.

When you’re a developer and you’re handed a design, you could interpret it any way you want, and if you don’t work with the same designer, you may not be as familiar with their workflow or design language, which leads to back and forth for approval and to get the build correct.

You’ll find yourself talking with the designer on functionality or assets when you could be developing. It really takes its toll on efficiency.

The other problem was project management.

The old system I used to work with was with just a glorified spreadsheet that had our task in one column and the hours allocated to it in another.

No descriptions, no area for assets, or information of the designers, and the process of getting a project over the finish line was slowed down by a lot of back-and-forth between the developer, designer, and strategist.

Looking back on it, it was very much like the Wild West.

There was never a set of tools we had to use for programming, it was more of what the certain developer felt more comfortable with or wanted to try.

Over the last three years, I’ve using all types of methods to develop. It was also great to have the exposure, but it was a little chaotic at times.

There were some developers using angular and react, some were using Markup or Twig.

For the PHP side of things, we had Cake projects and some Laravel builds, and as far as automation tools went, there was the age-old argument between Grunt vs Gulp.

Oh! And we even had some older sites built in Flash!

Yes, we managed, but as you can tell it wasn’t very efficient, and always had the concern of what happens if somebody is out for the week on vacation or if somebody decides to leave.

When you combine programming languages, workflows, or tools you are not 100% familiar with and the fast-paced world of an agency, you get late nights, you get frustrating spans of work, you get shoddy work.

Yes, it’s a learning experience, but you are on a timeline to get these products out and at that point, it can can get discouraging. This can lead to burnout, which is the kryptonite to creative agencies.

At IMPACT, we use Jira and our workflow is much more streamlined and effective.

Jira is basically a project management platform that uses cards to organize and plan campaigns/projects. Every card is a task to be done, where the strategists can link assets, give descriptions, and note priority.

We also all work on the same framework. It helps keep things more cohesive and avoid a lot of the headaches that came with multiple languages at the ad agency.

Now, let’s talk about culture and work environment -- because that’s the fun part!

Both IMPACT and the ad agency pride themselves in culture, and a tight-knit team that worked well together inside work and outside work -- But, IMPACT found the secret ingredient.

The key to obtaining and keeping hard-working, dedicated, passionate team members is to treat them as equals, with respect. Not just respect as individuals; I’m talking respect for your hard work and passion.

When you don’t feel respected at your job, it’s easy to lose sight of the end goal. You tend to do the work with a different mindset, just doing it because you’re told to do it, but when you feel valued, or you’re treated like part of an important team, things change.

You feel excited to actually work. You get inspired by the end result and what it brings for the client, and because at IMPACT, I actually talk to the clients and get to know them (where at the ad agency, I didn’t) I care more about how they feel of the end results and I work harder to meet their expectations.

To top it off, IMPACT is super transparent with its team; discussing their finances, plans, and goals.

When you are noticed for your work, time, and dedication, and they let you in behind the curtain of the company, you strive for the company and you work your ass off even more.

But it’s not just working hard, it’s playing hard too.

The team gets together every quarter for a week of working side-by-side, nights out, and later in the year, a kick-ass holiday party.

But wait, what do I mean we “get together?”

Well a portion of the team, including myself, works remote, which is another benefit in my opinion.

With the Ad agency, working from home was just not allowed. While it’s great to work in an office, be around your coworkers, and bond, in my opinion, I’m more productive working from home -- and IMPACT lets me have that flexibility.

Again, when I’m given the flexibility to do my best work, I’m able to pass that efficiency and improvement on to my team and the client.

I know not every company is the same, nor do I expect them to operate similarly.

Some companies may not need or want to operate so transparently or collaboratively. It’s just nice to look back on it and see how things have progressed in my industry or even my career.

I do value my time at the ad agency, it has helped me grow as a developer, and has given me experience and perspective, but working at IMPACT has also been a great learning experience and I love the flexibility that comes with it.

Having the option of working from home, working in a close team, and being respected and trusted in my role provides me the passion and drive that keeps me going and thriving to be a better developer.

Website security: What updates should you be making to your WordPress site — and how often?

WP Engine: A candid review for business website hosting in 2020

Do we need a website redesign or a facelift?