The Toxic Myth of "Fearless" Leadership 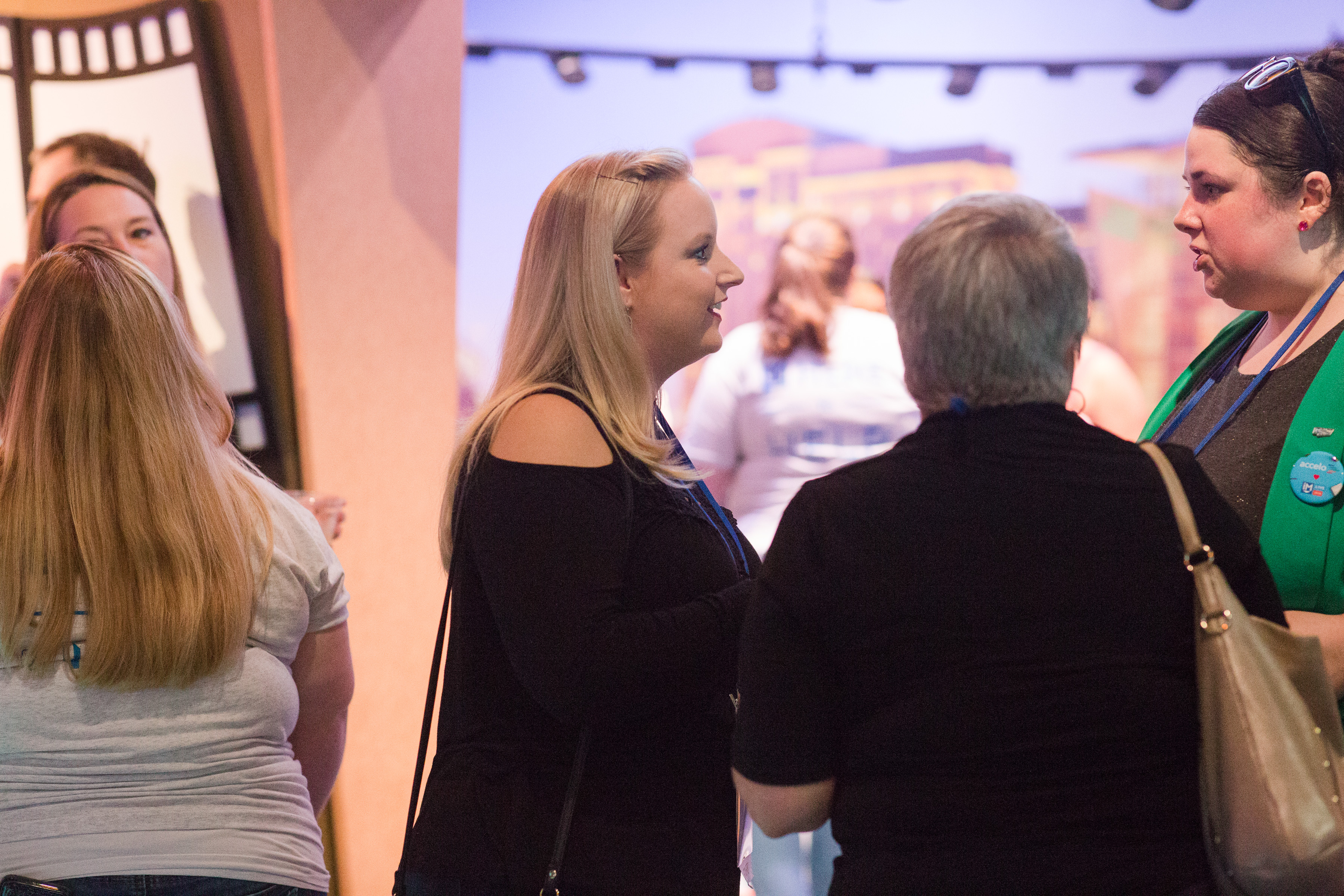 The first time I heard someone say this, I was in my first few months at IMPACT. We were going from 36 people to 23. Yikes.

I was slightly unnerved considering I’d just moved across the country. However, as we know, people leave jobs for lots of reasons. Sometimes it might be an issue with fit, but in many cases, often an individual will leave because they're ready to try something new.

In our case, those who left went on to find positions that suited them well, and IMPACT has seen exponential growth over the last three years.

In times of change, knowing that those you start with aren't necessarily the ones you grow with can be comforting if you’re an inbound leader who has to make hard decisions.

That is, of course, until you consider that there may be a day when that is being said about you.

IMPACT is an amazing place to work, but it is a job and you have to perform to stay onboard. We employ the best of the best, and sometimes, we have to part ways with really great people.

Because I know neither I nor IMPACT is unique in that regard, I share the story that follows so you can see that sometimes leaders struggle with the idea of outgrowing an organization... or an organization outgrowing them.

The added complication, of course, is that leaders are often expected to present an air of fearlessness. We’re supposed to show no signs of weakness or worry.

Basically, we’re supposed to be robots. But that's not real life.

And that's what this story is all about.

I have a question for you organizational and team leaders out there.

Have you ever had a time where -- after a lot of planning and team input -- you implemented a new structure or hierarchy you were sure was going to work and bring about positive change?

And then it didn't?

We had that happen last year in our services department. We restructured parts of our teams in a way that we had predicted would provide more opportunity for collaboration and growth.

Unfortunately, it took some time to realize our change wasn't going according to plan once it was put into practice. (And by "us," I mean me -- the VP of Services at IMPACT.)

It wasn't that my people weren't telling me that it wasn't working. They were. But, at the time, I thought it premature to call the restructure a failure, and that we still had an opportunity to do our due diligence to uncover the real issues.

While it's easy to play "Monday morning quarterback" about what happened with the knowledge I have now, it’s difficult in the moment to tell when you are challenging your team to consider the big picture or just being stubborn and not listening.

Although we were slower than the team would have liked, we did come around and work to make things right, starting at the end of last year.

To identify the real issues the team was experiencing in order to figure out solutions, we started by interviewing everyone and every team within the department.

One of the most challenging aspects of being an inbound leader that sounds much easier than it is, is asking for candid feedback and then being able to take it -- because honest feedback isn't always pretty.

In my case... I’m not going to lie. The end of last quarter felt like being punched in the gut for two solid months. That said, I'm glad we opened that door to our people, because it was so necessary to hear all of their feedback for us, so we could get past the growing pains.

In the end, we decided our structure needed to be more like the Spotify model to flatten the organization and enable the teams to be more agile.

“Wait, Does Flattening the Organization Mean I'm Out of a Job?”

Was IMPACT about to outgrow me with this new Spotify model?

As comfortable as I am at IMPACT, this thought scared the hell out of me. So much so, that I embarrassingly cried at a random Whole Foods in Dallas at the conclusion of our leadership team retreat in November.

(To clarify in case you’ve read some my other work on IMPACT’s publication, I don’t cry that much in real life. I just happen to share my deepest stories with you. I’m not sure why I felt the need to clarify that, but here we are. Perhaps that’s something I should explore in another article.)

We had spent three days together snuggled up in an Airbnb, working through our 2019 plan for the company. As part of the conversation, we had talked about the need for a new structure, but we hadn’t finished in terms of how our management structure might change.

In short, we knew at a high level what we needed to do to make things work for IMPACT -- and, most importantly, our people -- but not for folks like me.

We needed to check out of the Airbnb by a certain time, so we headed to lunch and then Whole Foods to wrap up the retreat before everyone headed home.

It was on the patio of Whole Foods on this chilly November day when someone said: “We need to flatten the organization.”

But really, the only part of the organization that needed to flatten was my department. And the only person who didn’t work on client work was me.

Rather than have a rational conversation where I could get my questions answered and better understand what others were thinking, I just cried. Someday, I will hopefully be able to express my feelings when I’m really mad or upset with more than just tears, but I’m not there yet.

All I could think about in that moment was that in a matter of months, I had become a person that wasn’t going to get IMPACT where it needed to be. IMPACT had graduated and my services were no longer required.

People had to make flights, so we never came to a resolution beyond the declaration that a flattening needed to occur. I drove the four hours home to Houston wondering what I was going to do.

I also questioned what would I even do if I had to get another job.

I felt like a failure and that I wasn’t good at anything, especially any job that had the word “leadership” in its description. I spiraled that night into self-pity and was lost for a few days.

But I still had to return to my people the next day as their leader.

So, I Put on My Fearless Leader Hat

When I returned to work the following morning, everyone was asking me how the retreat went.

I put on my fearless leader hat and smiled throughout the day.

"It went great," I said with enthusiasm.

That wasn’t a total lie, because 99.9% of it did go really well. I just didn’t mention how it ended.

I learned first-hand how lonely management could be that day.

My intention wasn’t to be deceitful. I just didn’t want to alarm my team or make anyone else fearful. I felt like it was my personal problem, and I didn’t need to burden anyone at work with it. (My husband on the other hand got an earful.)

What was even harder though was, when my own direct reports -- who are directors in the company -- asked me if their jobs were in trouble since they were afraid of what flattening the company meant for them.

Would they have to take a side-step or back-step in their careers to stay with the company? I didn’t have the answer. I didn’t know if I would even have a place anymore because we hadn’t figured all that out yet.

Even with my fearless leader hat on (or because of it), I could tell my positive affirmations were falling on deaf ears.

We don’t talk about the loneliness and fear that leaders have very much.

However, the more we hide what scares us or try to push it out of our heads, the more it subconsciously preoccupies us and the worse we are as managers, spouses, parents, etc.

I opened up about this period of time to one of my direct reports last week and she yelled at me -- in a good way. She said had I opened up in the moment, it would have been much more meaningful to her when I talked through her fears with her.

The wall I had put up made me come across as inauthentic. She didn’t believe me when I said things would work out.

It made me realize that when I made the choice in that moment to clam up and "be brave" for my team -- because I thought that would be more helpful -- I was wrong. Being a fearless leader was wrong and it hurt my team.

Although I recognize the need to rid myself of the fearless leader mentality, I still don’t know how to balance vulnerability and strength.

Maybe that’s not even what I need to balance -- but what I want to accomplish is being human but still enacting a feeling of confidence and security within my team.

What this experience has taught me is that it’s time to change how we manage, both ourselves and our teams, so we can be effective inbound leaders.

The mistake I made was not addressing the elephant in the room and, instead, making the choice to bulldoze through it. (Sorry, Mr. Elephant, but you’ve got to go.)

No, I didn’t know where my career was going. I didn’t know if I’d be able to stay with IMPACT. I was faced with a ton of uncertainty.

But it's OK to be uncertain. What’s not OK is to lay back and let the future happen to you.

Once I was done feeling sad and sorry for myself back in December, I decided to create some personal Q1 objectives and key results (OKRs). Just one quarter, so it wasn’t out of my grasp to accomplish. Also, I could feel encouraged that I could turn things around within three months.

I started by listing out what I was afraid of on my whiteboard in my home office. Calling it out and giving it a name was a great first step to figure out how to address it.

Next, I created three OKRs:

Regardless of what happens with my position and career at IMPACT, these are all very good things to do.

How Did It All Work Out?

I’m one month in so far, and everything is going really well.

Our new structure was 100% the right move, and IMPACT and its people are rocking and rolling. Everyone is still in their positions, and now they get to spend their time doing more meaningful work vs. navigating red tape managerial nonsense.

As for me, I'm also firing on all cylinders because I got my head right.

Rather than ignore my fears, I faced them head on. I may not have solved my immediate problem yet, but I’m bettering myself for what’s to come.

That's why my challenge to you is to forget about appearances. Faking strength in the form of “everything’s fine” holds you back. Acknowledge the unknown, put a name to your fears and focus on what you can control. Your future self -- and your current team -- will thank you for it.