The 4 Biggest Takeaways from the Mark Zuckerberg Op-Ed 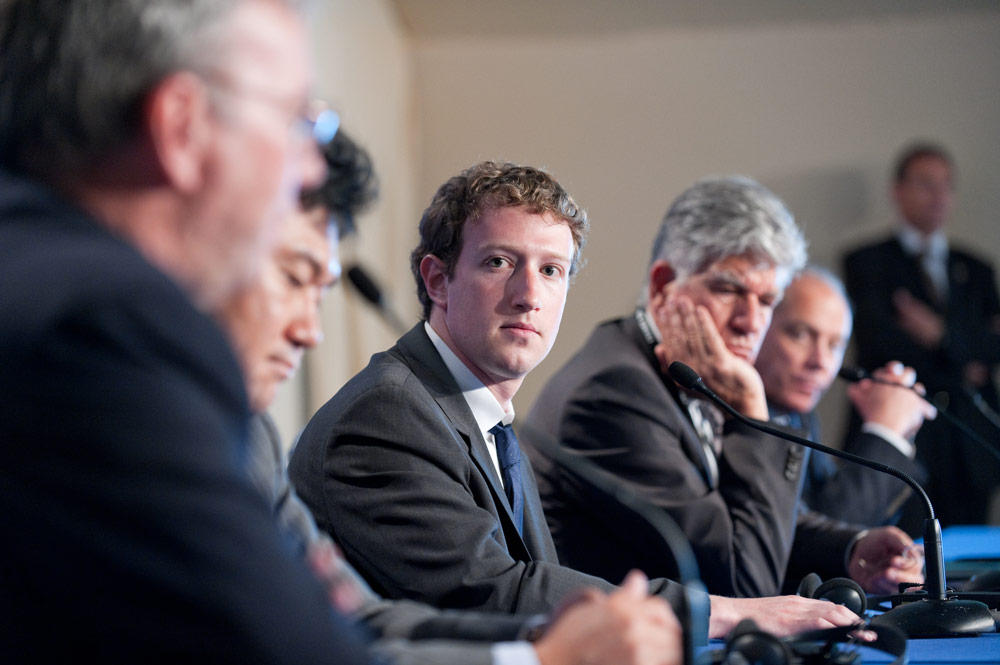 Facebook hasn’t had the best luck with PR over the past year.

From the Cambridge Analytica Scandal, data privacy breaches, and lawsuits about its deceptive ad practices, the social media platform has consistently been in the spotlight recently, but for all the wrong reasons.

In response to the growing criticism (and the tech sector in general), Facebook CEO Mark Zuckerburg posted an op-ed calling for governments and other external bodies to impose clearer and more proactive regulations for tech companies to abide by.

Specifically, it called for governments and third-parties to enforce stricter regulations in four key areas:

He called  for standardization of identifying and banning harmful content across all platforms, which would require lawmakers to step in and “decide what counts as terrorist propaganda, hate speech, and more.”

Zuckerburg suggests that rather than all sharing services having their own policies, an independent third-party body should step in and “set baselines for what’s prohibited and require companies to build systems for keeping harmful content to a bare minimum.”

In other words, the government needs to step in.

Due to the Cambridge Analytica scandal, Zuckerberg feels that in addition to Facebook updating its policies, laws need to be strengthened around political advertising.

He states that Facebook’s systems “would be more effective if regulation created common standards for verifying political actors” and that “legislation should be updated to reflect the reality of the threats and sets standards for the whole industry.”

Here, Zuckerburg called out one of Facebook’s top areas of criticism, stating that “effective privacy and data protection needs a globally harmonized framework” and that the laws need to “establish a way to hold companies such as Facebook accountable by imposing sanctions when we make mistakes.”

He stresses the importance of these changes on a global level, rather than different laws by state or country, to “ensure that the Internet does not get fractured, entrepreneurs can build products that serve everyone, and everyone gets the same protections.”

This point refers to the ability for users to share their data on one app with another.

While Zuckerburg thinks that this should be guaranteed because it’s convenient for both users and devs, he calls for “clear rules about who’s responsible for protecting information when it moves between services.”

Essentially, Zuckerburg is suggesting that the laws need to catch up to how people are using these platforms in the current landscape; that we need more powerful regulations to establish a “baseline” for all tech companies to abide by to ensure the internet (Facebook or otherwise) is a safe place for people to visit.

But Are People Buying It?

The public response to Zuckerberg’s letter hasn’t been overwhelmingly supportive.

Many have criticized the op-ed, saying it’s a self-serving PR stunt to take the blame away from Facebook and use legal ambiguity as a scapegoat for Facebook’s long list of controversies. 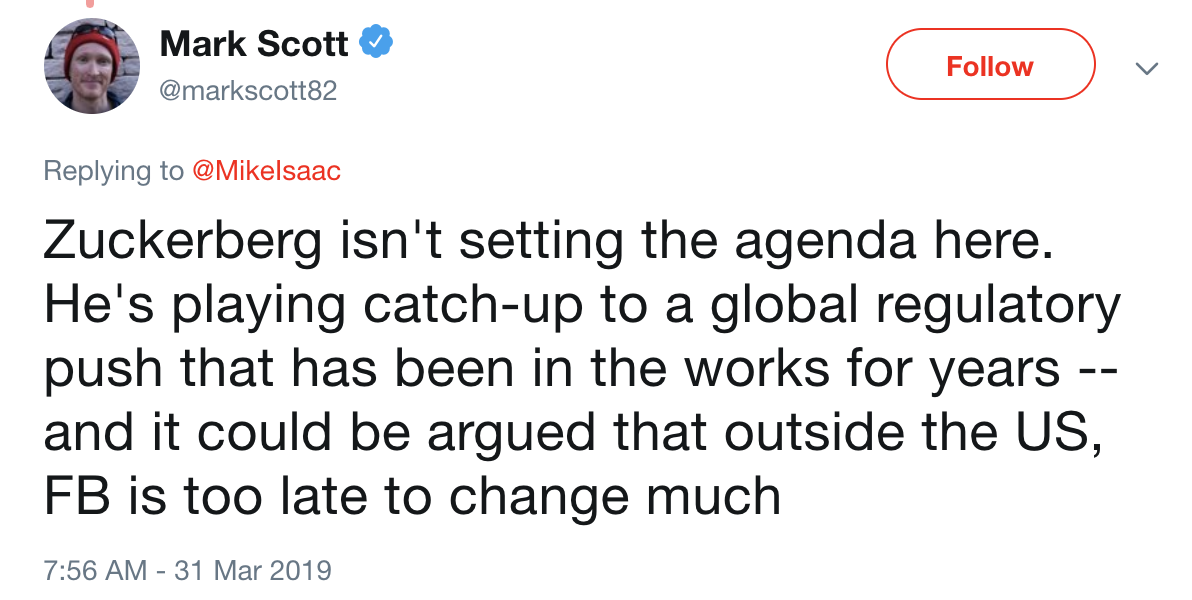 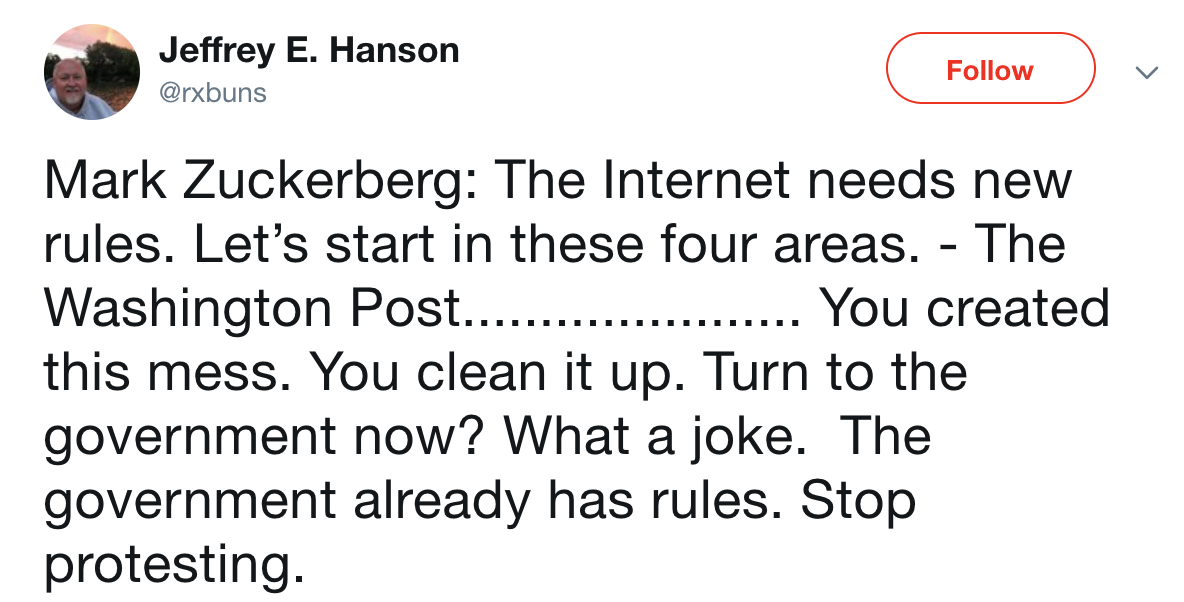 Not only that, but critics also feel that the call for regulations is less about Facebook’s reputation, but actually an effort to eliminate competition.

Moreover, criticism of the op-ed also stems from Zuckerburg’s proposal for government-imposed regulations on what is considered “harmful content.”

Many feel, however, that while independent companies can police content, doing so at a government level is a violation of free speech. 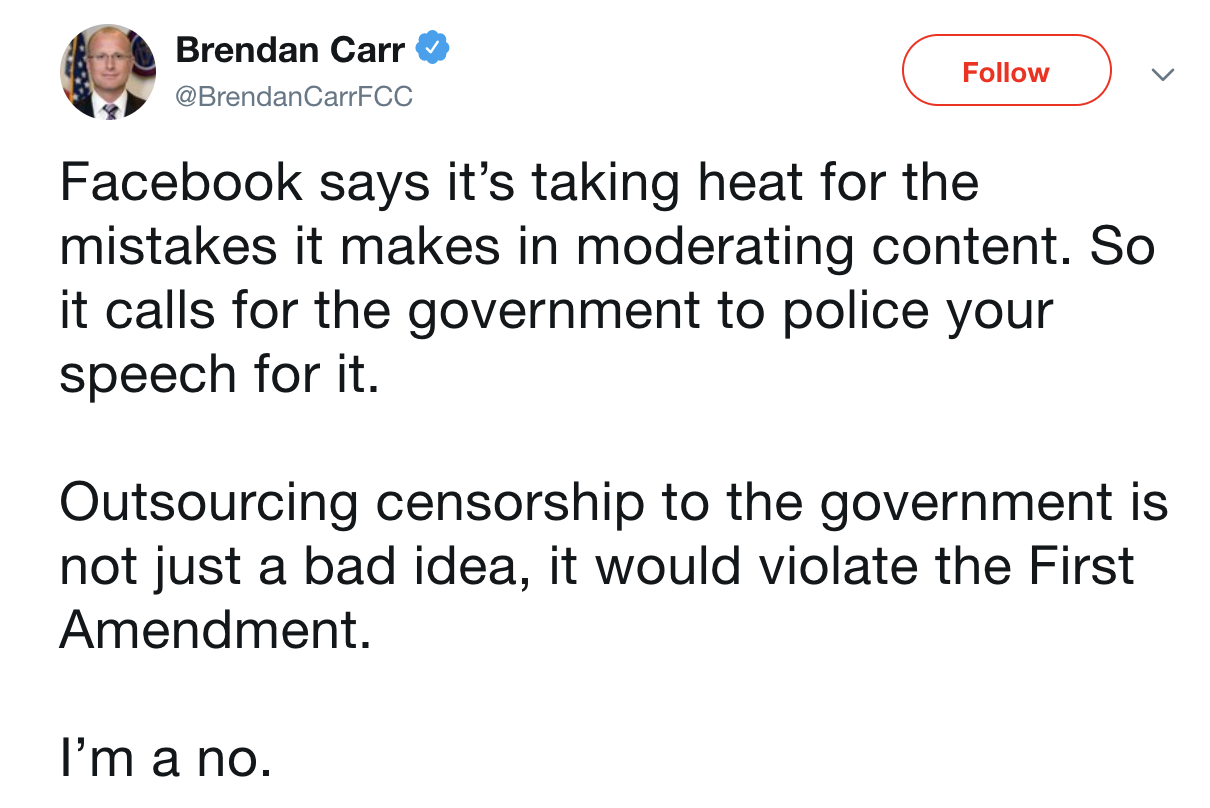 Others have argued that while Zuckerburg’s motivations to push for stricter regulations may have been to save face, his point is still valid.

In order to truly ensure safety in the modern world, there needs to be standardized guidelines put into place on what tech companies can and can’t do, and clear consequences if they’re broken.

The Future of Tech Regulations

Regardless of your opinion on the piece, it’s brought to light an interesting conversation on government versus tech company accountability in ensuring public safety on platforms.

Is the platform responsible for ensuring that certain content gets published or is the government? Who determines what is indeed “harmful content?”

As marketers, these are questions we need to pay attention to and ask our selves as well.

We need to finger our finger on the pulse of platform and government regulations. Furthermore, regardless of who ends of policing what we say, we need to consider the possible audience implications of the content we post and the messages we send.

Our work doesn’t exist in a vacuum.

As Facebook is learning, what we do and say can enable and encourage the actions of others and everyone must keep this in mind before hitting publish.