With the 2016 United States presidential election right around the corner, that fact is clearer than ever.

Since nearly ⅓ of millennials get their news exclusively from social media, presidential candidates quickly realized they had to take their campaign online in order to reach this valuable group of voters.

There is a lot marketers can learn from the social media activity of this year’s candidates.

Although you and your brand may not be vying for the White House, here are 4 social media lessons from Election 2016 that you can use to boost your own social media strategy.

1.) Knowing your audience is key

Whether you’re a presidential candidate or marketer, one of the most crucial aspects of a successful campaign is aligning yourself with your votes (or in our case, your audience). Social media marketing makes this practice much easier.

Social media not only enables you to reach your targeted audience or buyer persona, but data provided from activity on these platforms allows them to gauge voter interest on particular topics to better identify what truly matters to them.

Like any marketing strategy, the goal of social media marketing to create content that resonates with your followers and motivates them to take action.

Once you have a clear understanding of who your audience is, tailoring your message to their values, pain points, and beliefs help position you as the perfect “candidate” and earn their form-fill or even better, purchase.

Despite being a rather controversial figure on social media, Trump knows his audience well and what will resonate with them. He started his campaign rallying against the idea of political correctness, something his following showed full support of.

Trump has a keen understanding of audience and uses his social media platforms to give a voice to their main frustrations as well as interact with them. 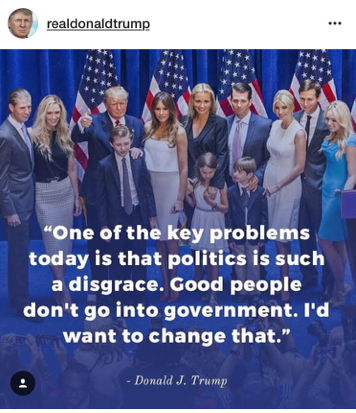 Thank you Colorado Springs. Get out & VOTE #TrumpPence16 in November! pic.twitter.com/wK02fWzJey

One of the most appealing things about social media is the fact that it gives you direct access to celebrities, executives, and brands like never before.

If your social media account is no more than a newsfeed with no personal voice or interaction, it’s unlikely to have much success for you. This year’s candidates most definitely recognize that.

Election 2016 has taught us that people take tone of voice and messaging on social media very seriously.

The media commonly cites candidates’ tweets when discussing their views on current issues, and many people even get their news from social media. With so much focus on social networks, showing voters who you are while there is more important than ever.

This is why, for marketers, having a unique and consistent voice is so essential to a successful social media campaign. It humanizes your brand and makes your message seem more authentic and less “sales-y,” while consistency builds trust.

In Election 2016, social media has been used to let voters see a side of candidates they might not see at debates and speeches; a more candid, less rehearsed side.

It also allows candidates to have more control over the image they put out into the world and can be widely-used to appeal to voter emotions.

A big hurdle for the Clinton campaign has been to soften her image.Social media has been a great way for her to do this.

Posts showcasing her more personal, caring side have helped humanize her brand, and provides a huge contrast from the serious policy-minded Hillary we see in debates and speeches.

This approach has greatly helped make her more relatable to voters.


This post on Clinton’s Facebook page, for example, was great for her because it gives her audience something sweet and personal to relate to.

America loves a good love story, and reminding them of a time in Clinton’s life when she was like them increases her appeal to voters.

3.) Get People Talking (But Use Caution)

A great social media campaign is one that gets people’s attention.

If there’s one thing I’ve learned about social media from this election, it’s that generating buzz online can produce real-life results.

Even if you don’t like him, follow him on social media, or even use social media, you’ve probably heard something about what he’s posted. Why is that?

Because Trump’s tweets create buzz and get people talking.

This strategy, although controversial, has worked well for him.

In the Republican Primary, Trump dominated 62% of candidate-focused media coverageand a lot of the coverage had to do with his over-the-top social media content.

It is estimated that his brash statements on social media earned him so much media coverage, he essentially received $2 Billion in free advertising.

While I’m not suggesting adopting Trump’s exact strategy to your own brand, his results do show the power of taking on a strategy that separates you from your competition.

Be Careful When Going Negative

Despite Trump’s success, his strategy has challenged (and occasionally alienated) large groups of voters as well.

For example, when Trump accused Clinton of playing the “woman card,” Clinton was able to spin it in her advantage:

*does not include a 21% discount on your purchases. pic.twitter.com/2xiRyOws5F

The key takeaway is: Being bold pays off, but take calculated risks. Know that whatever your brand says or does, is being seen on a global platform and that you want to be careful not to rub your potential buyers the wrong way.

4.) Get Your Audience Involved

Perhaps the real game-changer of social media for both candidates and marketers is the ability to actively engage with an audience and make them a part of the conversation.

It’s a well-known fact that word-of-mouth marketing is one of the most powerful forms, but in the past, this was much harder for marketers to foster this kind activity in their campaigns.

Social media changed all of that.

Today, there are many features on social media platforms that allow marketers to create word-of-mouth.

This election year, candidates have been utilizing these features to not only to keep voters up-to-date on their latest events and policies, but also give them the opportunity to interact with them first-hand.

This tactic benefits candidates (and marketers!) in two ways:

This election is a great lesson to marketers to take full advantage of all the features social media platforms have to offer including hashtags and Snapchat Geofilters amongst other things.

Hashtags are a useful tool for connecting with an audience, expanding a campaign's reach, and increasing visibility around a particular brand or topic.

This election season, campaign slogans can be better recognized as hashtags like #MakeAmericaGreatAgain, #FeelTheBern, and #ImWithHer.

There have also been trending hashtags #DontBooVote, relating to a speech President Obama made encouraging people to go out and vote rather than complain about how things are or simply “boo” during the candidate’s speeches.

The benefit of having these hashtags is they allow your audience to be a part of the conversation and spreads awareness quickly about a given topic.

They are also a good tool for marketers because you can see not only have many people you’ve reached, but their opinion of the content as well.

Because a large portion of millennials get their political news strictly from social media, many don’t take the time to watch debates and speeches from candidates on television.

Campaigns quickly caught onto this trend and began live-tweeting important quotes from their candidates to get a wider audience involved in the event.

Leadership is about using the anger to motivate us, not to define us. #GOPDebate pic.twitter.com/XzNURqThC5

This method gets the candidate’s message directly in front of their audience (on a platform they’re already using) and encourages engagement by allowing people to share the content with their own following and even respond to the tweet.

This engagement also provides important data, showing what topics are most important to their audience, so candidates can further align their strategy accordingly.

Snapchat GeoFilters have also been frequently used in this campaign to showcase support for a specific candidate.

Get your own Geofilter for your brand here.Using Geofilters is a useful tool for marketers because it puts your brand in front of the millions of users who may not be present at the events. It also gets users to interact with your brand as they use it to take pictures to send to friends and add to their story.

Often used with Geofilters, Snapchat Discover is another highly-effective way marketers can engage a wide audience.

Snapchat Discover allows users to send their snaps into a public story -- usually dictated by a particular location -- and if selected, they are compiled into a “Discover” category for all Snapchat users to see for up to 24 hours.

This is helpful for marketers to inform audiences about an event, and provides a fun way for users to virtually be a part of it through other people’s snaps, or submitting their own.

The 2016 Presidential election teaches us valuable lessons about the power of social media marketing.

Brands can learn a lot from the next potential leaders of the U.S. about effectively engaging an audience, keeping them updated in the latest news, and expanding their reach.