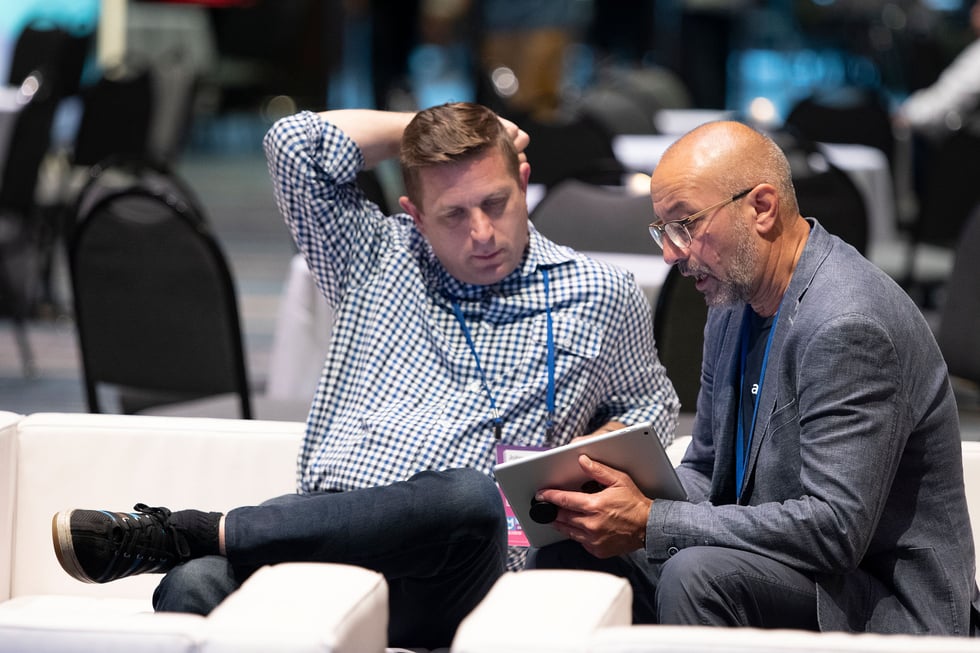 In They Ask, You Answer, I wrote candidly about one of the darkest times in my professional life.

When the Great Recession hit in 2008, we thought our business, River Pools and Spas, would never recover.

Almost overnight, we lost much of our expected revenue as customers decided they weren’t comfortable going forward and building the pool we had agreed on.

Within a few months, our business bank account was overdrawn, and we were forced to contemplate shuttering retail stores, laying off workers, and, potentially, closing our business for good.

Now, more than a decade later, I can look back on that experience as a truly formative one in my own development as a businessman and leader.

Planning for a recession begins when things are booming

Today, we can’t seem to agree on anything as a country.

Some people say the economy is humming along, pointing to Wall Street record highs and unemployment numbers not seen in a generation.

To others, trade worries and slowing GDP growth point to a downturn on the horizon.

In my opinion, there is always some economic uncertainty, and economists can always find numbers to support one viewpoint or another.

However, businesses can use uncertainty to take a good look in the mirror and prepare for whatever is ahead.

Economic downturns are part of the natural cycle of business. While you can’t control the economy, you can prepare in the best way possible — and you can control your own reaction. However, if you choose not to prepare, you're less likely to make it through unscathed.

Remember, your employees, customers, and clients will all look to you for guidance, and they will interpret both what you say and what you do when determining how they should react.

Even when the waves get rough and the storm rages, people like to know that there’s a steady hand driving the boat.

Remember the old saying: A smooth sea never made a skilled sailor.

Although this sounds like cold comfort if you’re facing a recession, small business owners have an advantage because of the nimbleness that comes with being small.

Major pivots and new initiatives are more realistic with a smaller team.

While small to medium-sized businesses (SMBs) might lack the resources of larger corporations, I like to say that you can be a “digital David in a land of Goliaths.” You can move quickly, shift to meet new opportunities, and react effectively.

The truth about any economic downturn is that some businesses are guaranteed to gain market share, even as others lose it. It happens in every economic contraction. In my experience, it is the small, agile businesses who are most likely to do this — to see opportunity amid the crisis.

Secondly, small businesses are more likely to have the benefit of transparency, and this becomes an asset in a downturn.

I believe it is critical for business owners to be open and frank with their employees, and this should begin long before times get tough.

The more transparent leaders can be with their team, the more likely those employees will feel trusting and informed. You should value candor over comfort.

With a culture of transparency, you are more likely to have employees volunteer to accept new roles or change responsibilities if the company needs it.

If you do have to close stores or lay off people, it’s best if they can see it coming and understand the rationale behind it. Should it come to this, you may have employees choose to leave and go on unemployment if that seems like the best option for them.

Such decisions are always difficult for all involved; transparency, I’ve found, is the best method for easing the pain.

I don’t want to pretend that anyone ever hopes for a recession or dreams about a depression, but trying times call forth fortitude, initiative, innovation, and teamwork like nothing else.

I know that River Pools and Spas would not be the strong company it is today if it were not for the storm we weathered together a decade ago.

Although it was a very difficult time for me personally and professionally, the decisions we made allowed us to emerge more sturdy and focused than we had been in the past.

Personally, I use the lessons I learned during those times every day when I speak to business groups, when I write, or when I make decisions to help lead IMPACT.

In a downturn you find energy and focus that you just can’t always summon elsewhere.

You are forced to get creative, and to make decisions that you may come to realize you already should have made.

In Jim Collins’ book Good to Great, he asks companies to develop a “hedgehog concept.”

This comes from an earlier essay that argues that, while the fox knows many things, the hedgehog knows one thing really well.

For us at River Pools, we realized that we were not doing retail very well.

We had two beautiful retail stores where we sold everything from pool noodles to tanning beds. The tough economy made us see that these facilities didn’t align with our core goals, so we closed them.

Now, you may think that was a bad thing, but in reality, it was the right decision. It was a decision we didn’t have to make it when the economy was strong, however.

The recession forced us to see the writing on the wall.

In turn, we were able to focus our efforts on installing fiberglass pools. That was our hedgehog concept, and that became our sole focus.

The downturn of 2008 took us by surprise.

We, at River Pools, were not prepared, so our scrambling was all the more frenzied. But we were certainly not the only ones surprised.

Major businesses and institutions were caught off-guard, and many did not make it through the recession.

After all, Lehman Brothers Holdings had been in business since 1850, weathering the Great Depression and any number of smaller recessions, but the firm filed bankruptcy in 2008, which remains the largest bankruptcy in US history.

Today, with a myriad of metrics being reported by dozens of government and NGO organizations, it can be hard to know which ones matter to your business.

For small businesses concerned about a coming downturn, I would say there are two essential metrics to monitor.

If you are aware that your lead flow is trending downward and you haven’t really changed anything with your marketing, this should be a red flag.

If you see this happening, you should use the relationships you have with industry peers to see if they’re experiencing the same thing.

Remember, recessions are something everyone goes through together. If you have friendships with competitors in your market, you can ask if they are experiencing a dip in leads as well.

In my experience, the number one reason why a customer doesn’t choose to buy from a salesperson is not because they found a better solution elsewhere — it’s because they decide they can’t afford to make the deal.

The biggest enemy to sales is not the competition, it’s inaction.

It’s important to train your salespeople to build relationships with prospects that are strong enough to still have a conversation, even if a deal falls through. That way, you can find out the real reason a deal didn’t close.

If the relationship is a trusting one, the prospect with tell you, “you know what, we just looked around and said to ourselves, ‘we’re just too nervous about the market.’”

In such a case, you should remember that you didn’t lose the deal. There was no deal.

What’s more, that might be a deal you can win in the future.

Again, a downturn forces you to be inventive. If enough deals fall through for a certain product or service, now might be the time to reimagine what you sell.

Can you come up with a package that would help more deals close?

At River Pools, we were suddenly much less likely to sell our typical pool installation package, that usually ran about $60K during this time.

So, we asked ourselves, could we come up with a $40K package that might garner more deals, even if we make less profit and have to adapt our work process?

The business owner in a recession has to always be thinking creatively.

You'll be okay if you make plans A, B, and C

Future-proofing your company starts in the good times. It begins with communication and alignment.

If you don’t have those things in the good times, you can’t expect that they will suddenly be there in a downturn. Pain and struggle magnifies every element of your company. If there are divisions or fractures, those will get worse.

By contrast, the more aligned and the more self-aware you are, the more foresight you’ll have.

Business owners and leadership teams should be having a conversation in which they make plans A, B, and C.

That way, the scariest prospect is out there in the open, on the table.

Then, you can start planning for it.

So, we look ahead to next year and think, what if we only sold 70 pools next year. What would our business look like?

That’s our “plan C,” and when it’s out in the open, it suddenly becomes less scary.

Bad times are inevitable, but they can spur growth and inspire focus. When things go badly, it doesn’t help to pound sand and wallow.

You have to move quickly through the negative and focus on the solution.

Put the worst case scenario out there on the table. What is it? Is it laying off half of your workers? Is it closing a

If you and your leadership team can agree on what the worst events could be, you can start to get solutions on the table.

As hard as it can be, I urge you to reject negativity, which can be contagious.

As a leader, you have to model optimism and pragmatism. Be open with your workers about the reality, but focus on the solution.

Remember, in every single downturn, someone is going to gain market share. How can you be the company that gains?

With a steady demeanor and the right attitude of nimble, shrewd decision-making, you can find recessions to be times of clarity, purpose, and direction.

It all comes back to being prepared — and choosing the right outlook.

(Image courtesy of Seshu at connecticutheadshots.com) 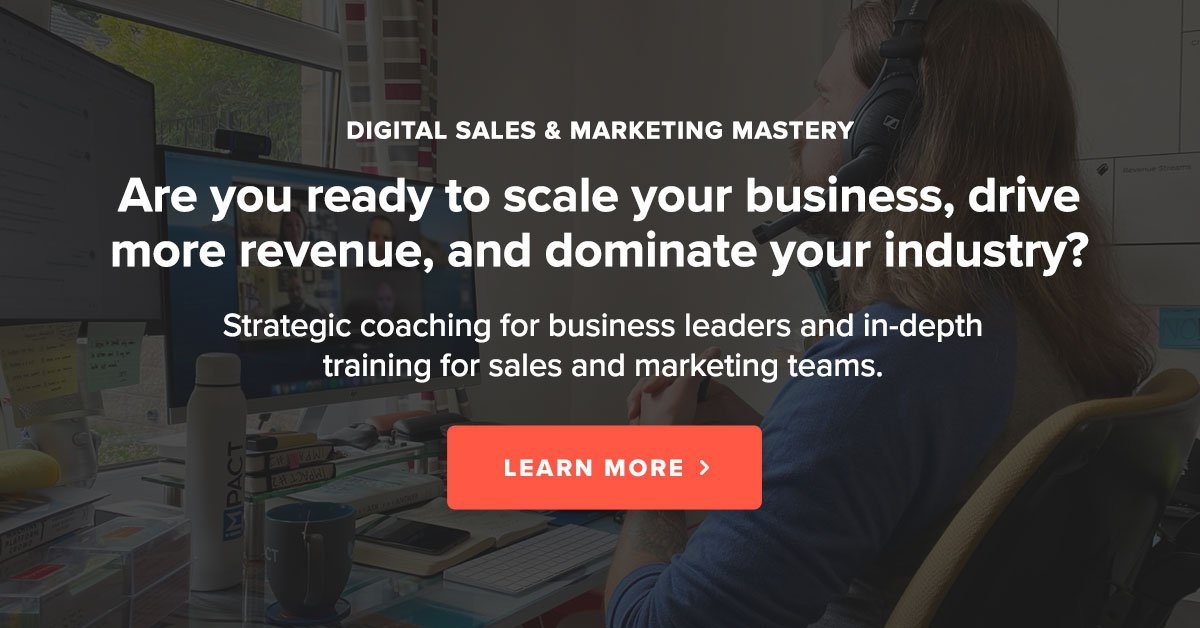 How can we determine if IMPACT is not the right agency for our company?

What are the consequences of not insourcing our content creation?