What Serena Williams Can Teach Us About Emotion in the Workplace [MarketHer Ep. 44] 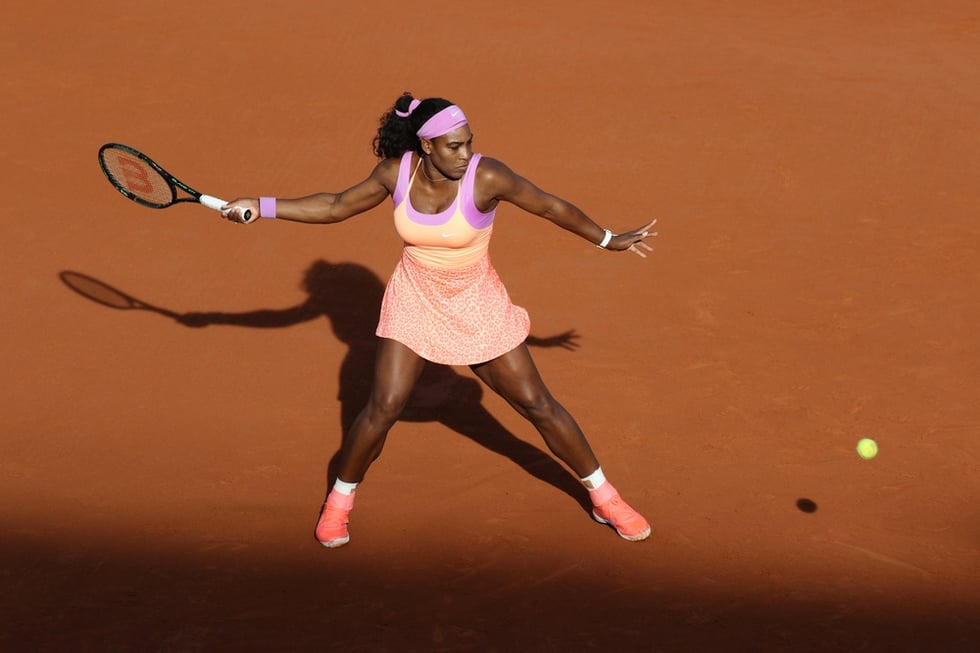 When I was 22, in my first job out of college as a graphic designer, I had to get approval from an extremely opinionated, domineering woman on everything I designed.

One day, I had made our quarterly postcard (hey, it was 2008) that I thought was on brand and pretty darn cute.

When I showed it to her for approval, however, she hated it, and held back nothing as she told me so.

I felt absolutely defeated, but most of all, I was just plain mad.

She was rude, unconstructive, and gave her feedback in front of everyone in the office.

When she was finally done berating me, I stepped outside to take a break. As I thought back on her feedback, all I could do with my anger was cry.

As soon as tears started rolling down my cheeks, I was mortified. I quickly wiped them away to regain composure.

I was embarrassed I was crying at work, but at least it was in the parking lot where no one could see me.

After that day, I vowed to never cry at work again, and I didn’t for 7 years -- until I came to work at IMPACT.

I’m not embarrassed to say I’ve cried at work in the last three months.

My job is wonderful and fulfilling, but it also comes with a healthy dose of stress and times that honestly make me question if I’m even in the right profession anymore.

Those moments are soon followed by exponential growth.

For example, one day I had a meeting with one of my direct reports.

This person wanted to provide some feedback for me since I had been managing them for a couple months.

Although I was a little nervous, I was also excited as I anticipated our call. We had a good relationship, so I knew this person would tell me what I needed to hear.

That person did not disappoint. For a half-hour, they gave me a lot of examples of things I was doing wrong as a manager.

I was happy they gave me feedback, and in the moment, handled it well in terms of listening and taking it in versus arguing or defending myself.

When the meeting ended, I had to immediately hop into a team meeting (poor planning on my part). It started with a segue where each person had to rate how they slept on a scale of 1-5 and the mood they were bringing to the call.

As soon as it was my turn to go, I opened my mouth to say I slept great but...burst into tears instead.

Because I had just jumped into another meeting after talking with my direct report, I had no time to process what was said or how I felt.

It was in that moment of having to say what mood I was in that I realized I was upset and feeling like a really crappy boss.

Whenever I get overwhelmed with any kind of emotion, it comes out as tears.

Since I wasn’t going to be able to turn off the waterworks any time soon, I quickly turned my camera off and muted myself, kicking myself at the same time for crying at work when I swore I’d never do it again.

But then something amazing happened.

Everyone on the call instantly dropped what they were doing to make sure I was okay.

When I opened up about what sparked my emotional outburst, they immediately consoled me and supported me.

Because of that raw, vulnerable moment, I have since felt a stronger connection to my peers and know I can go to them when I need advice or help.

They’ve coached me on how to improve based on the feedback I received, and as I’ve encountered other hard things, they’ve been there for me.

Now, I’m not saying everyone should cry every time something is hard, but in those moments when you are struggling to take a step back and process your emotions, you shouldn’t feel embarrassed.

We are all humans who are passionate about the work we do. Sometimes we show that by getting mad, getting upset, or by feeling down.

Although we work hard on emotional agility here at IMPACT, we don’t lose sight of the fact that we’re a team working toward the same goals and should be there to support one another.

What Serena Williams Has to Do With Emotions in the Workplace

Even with my previous experience with showing emotion at work, when I first heard about Serena Williams’ emotional outburst during the women’s US Open this past weekend, I, too, reacted with an eye roll.

I thought it was unsportsmanlike and that she jumped to it being a gender issue very quickly.

However, in the aftermath of everything I read, I realized I was approaching the story with bias.

Whether you agree or not with how she expressed herself, when you look at how athletes have been portrayed over the years in the media, you could understand how she could feel there is a double standard. 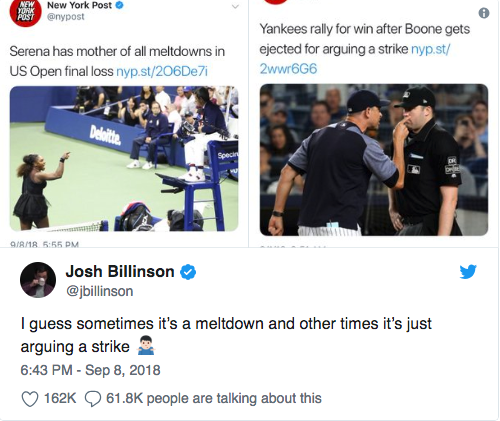 (2/2) When a woman is emotional, she’s “hysterical” and she’s penalized for it. When a man does the same, he’s “outspoken” & and there are no repercussions. Thank you, @serenawilliams, for calling out this double standard. More voices are needed to do the same.

I particularly don't love how Williams expressed herself, especially since she did break the rules, but if she feels there is a double standard - and she's not the only one - perhaps there's merit to it.

I find myself having to check my own bias.

Just as I felt embarrassed about crying at work, I felt annoyed that Williams was what appeared to me to be throwing a temper tantrum.

What I really should be looking at is the larger problem and the root of why she's feeling this way - and check that this is not happening in our workplace.

Join the Conversation on MarketHer

In this week's episode of MarketHer, we continue the conversation that Serena Williams started as it applies to the office environment and talk through the following questions:

Check out the episode below and then join us in our Facebook MarketHer Group to continue the conversation!

If you have some tips, email us at markether@impactbnd.com. We will share it on our Facebook page!!

Mindful Meditation is Not Easy. Tips from Chris Duprey on How He Got Started! [MarketHer Ep. 57]