The Most Important Lesson I Learned About Public Speaking at #IMLive19 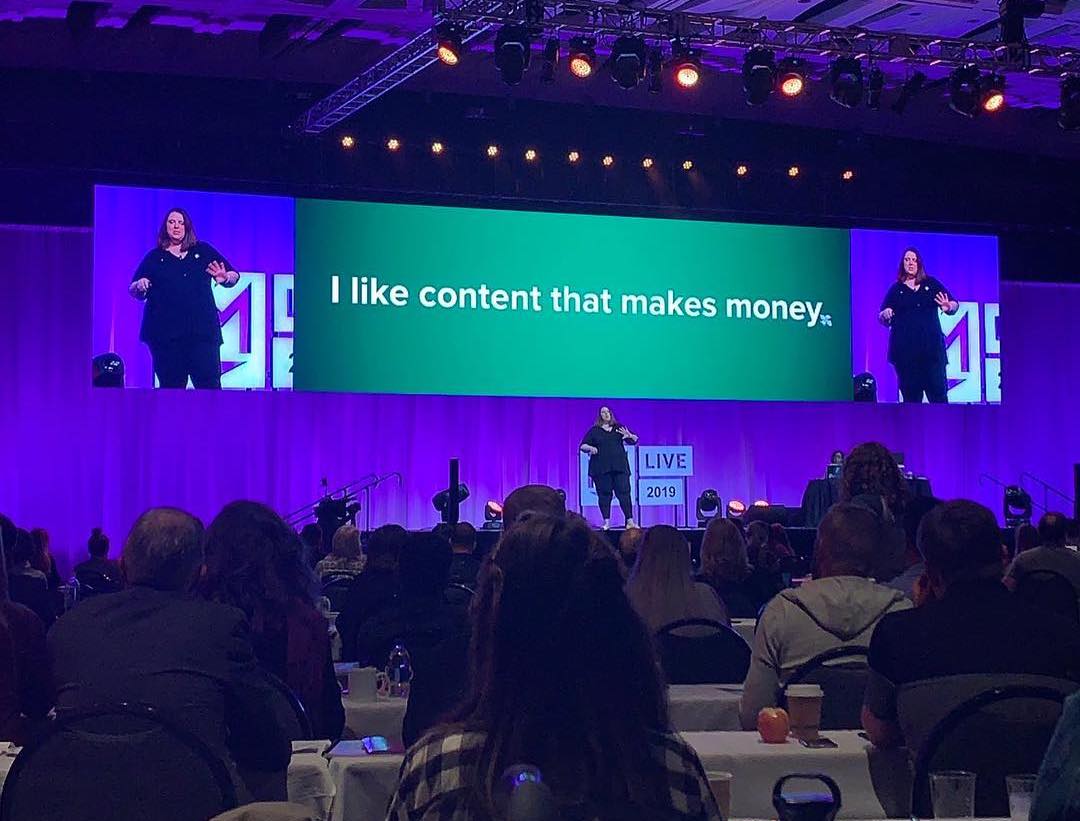 Whew, IMPACT Live '19 has come and gone. And I feel like I lived an entire month in seven days last week. In fact, in the past two days, I've slept 20 hours. I consider myself a sleep connoisseur, but even for me, that's a lot. On the other hand, being a "blanket burrito" for an entire Sunday is, in my book, a Sunday well spent.

But we're not here to talk about my ability to test the bounds of napping.

Instead, I want to talk with you about the most valuable and unexpected lesson I learned after giving my talk on Thursday on the power of pillar content, as a bookend to the interview I gave a few weeks back on how I prepare for talks.

So, without further ado, let's get into it.

Even though I received a lot of positive praise following my talk at IMPACT Live '18, I couldn't forgive myself for running four minutes over. In the grand scheme of things, this may not seem like a big deal. But given that my slot was only nine minutes long, that means my talk was almost 50% longer than it should have been.

How did that happen?

The slide deck wasn't too long, and the story I was telling was concise. The problem was I had overly scripted myself. I had every line mapped out, to the point where it left no room for pivoting or those moments when I play off the audience and the energy in a room. So, by the time I got to the end of my talk, I had run way over.

This year, even though it made me really nervous — especially since the talk was more than double in length — I went in the completely opposite direction. Yes, I still had a few moments, where I knew the wording had to be just so, in order for an idea to have the right landing.

But for the most part, there was no script. Only an understanding of what I needed to say (generally) and in what order.

How I prepared with little to no scripting

Again, it was terrifying.

My gut was telling me I was doing the right thing; the best talks I've ever seen are those that feel natural and unrehearsed, and I was, in fact, prepared. However, I'm also a control freak, so not having every single word nailed down was an utterly scary leap of faith for myself.

Did I still practice? Absolutely. But in a very different way:

I still felt incredibly nervous standing backstage, as Marcus Sheridan announced me. I was mic'd up. I was doing windmills with my arms to loosen up. I jumped up and down a little bit.

And then I heard the opening bars to Don Henley's "Dirty Laundry," and I went out on stage. As I looked out over the audience, my instincts took over, and I knew I had made the right call.

I only went a few seconds over on time. I had plenty of space to riff and have fun with the audience. And while I still felt a bit shaky not having everything plotted out to a tee, a lack of a full script empowered me to just totally cut loose.

In fact, some of my best and most powerful moments were totally off-the-cuff improvs. Moments like when I realized, "Oh my gosh, and I need to remind them how, if you're a content manager, your goal is to walk in every day and make everyone else look like rockstars."

I walked off stage feeling amazing.

Did I recognize a few places where I would tighten things up the next time I gave that talk? Absolutely. But my style of speaking is often so audience-dependent, I need the full "we're live!" experience to truly hash out the details.

What's the right balance of rehearsal for you?

Well, that's going to depend on how you like to give a talk. I'll say that as I've become more comfortable, scripts have become much more restrictive. On top of that, this is just my style of speaking.

I'm an unrepentant high school theater nerd who loves to create moments on stage with an audience. And that's something that's extremely hard to rehearse. Of course, you'll still catch me quietly repeating a handful of very scripted lines in the corner, because I know there can be no improv when it comes to certain moments.

That said, I think sometimes many of us cling to this notion of scripting a little too hard and for too long. So, my advice to you is this. The next time you give a talk, ask yourself, "Do I really need to know exactly what I'm saying in every single moment, or are there are only a few specific points where I really need to nail the words?"

It will feel nerve-wracking at first, but have a little faith in yourself. And recognize the line between when a script will help you and when it will hold you back is a very fine one indeed.

Design Feedback 101: How to Give Feedback on a Design Mockup

How to Improve Your Communication at Work [Infographic]

World Class Communication, INBOUND Updates, and... Nothing Else? [Hubcast 210]

"How to Have Tough but Effective Conversations with Clients" [Creator's Block Ep. 92]

By Justine Timoteo on November 6th, 2018

By Justine Timoteo on November 6th, 2018

How to Speak So People Actually Listen [+Video from Julian Treasure]