#EmbracingTheStruggle of Public Speaking for the First Time 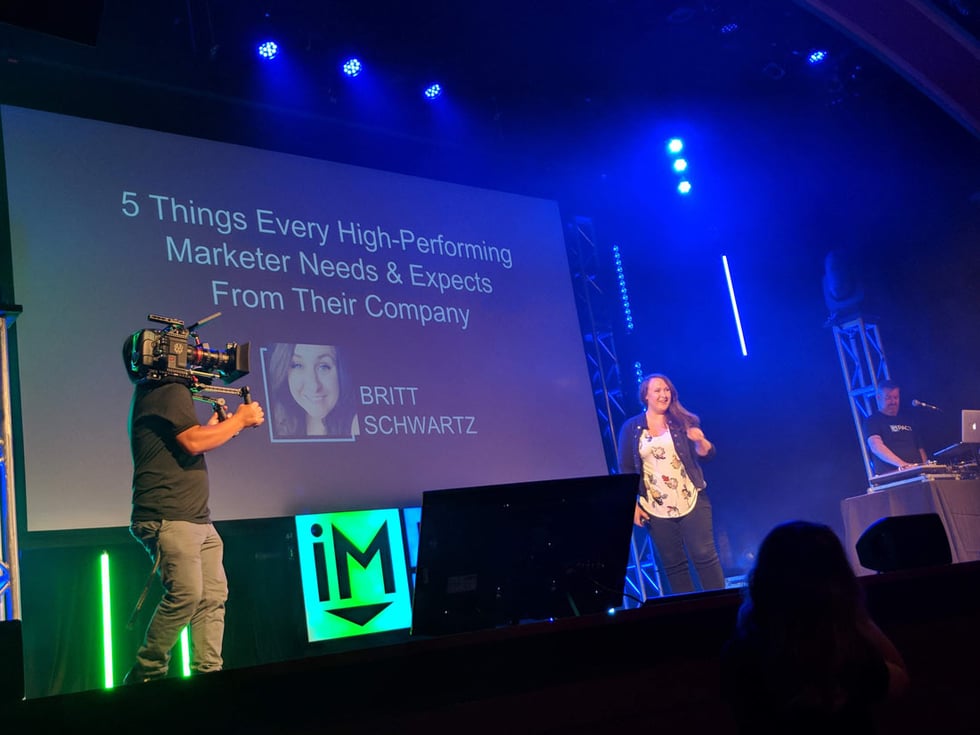 My last thought before walking out on the IMPACT Live stage was, "[INSERT INAPPROPRIATE WORD], I don't want to do this!"

And then my fellow teammate, Dan Baum told me it was too late for that and guided me on stage where our CEO, Bob had just called my name and hundreds of people were waiting for me to speak.

This is the story of everything that led up to that moment...

A few months back we did an episode called "Where Are All the Women Speakers?"

Angela, Brie, and I had come across some research that showed men are by and large owning the speaking gig and of course, we thought that was hogwash and said as much during our show.

Two weeks later, during a visit to HQ in Connecticut, Bob asked me if I would speak at our upcoming event, IMPACT Live.

IMPACT Live '18 was the second annual event under its name.

A major part of my role here at IMPACT is to not only guide and direct my clients' strategy in marketing, sales, and business but to create my own personal brand.

It is my job to not just reach the clients and team members I speak with every week, but to influence the greater marketing-world about the successes and lessons I'm learning with each new campaign and tactic.

My first thought when Bob asked me to speak was that he'd want me to discuss ABM, nurturing funnels, user mapping, or any number of cool things we've been working on for clients.

But, that's not what he asked.

Bob asked me to speak to the audience at IMPACT Live about what high-performing marketers need and expect from their companies.

I instantly loved the topic and was deeply honored that he trusted me enough to share this information - as it's so critical.

The Prep or Lack There Of

Having never spoken to more than a group of 8-10 in a client call before, I had no idea how to prepare for this type of event. 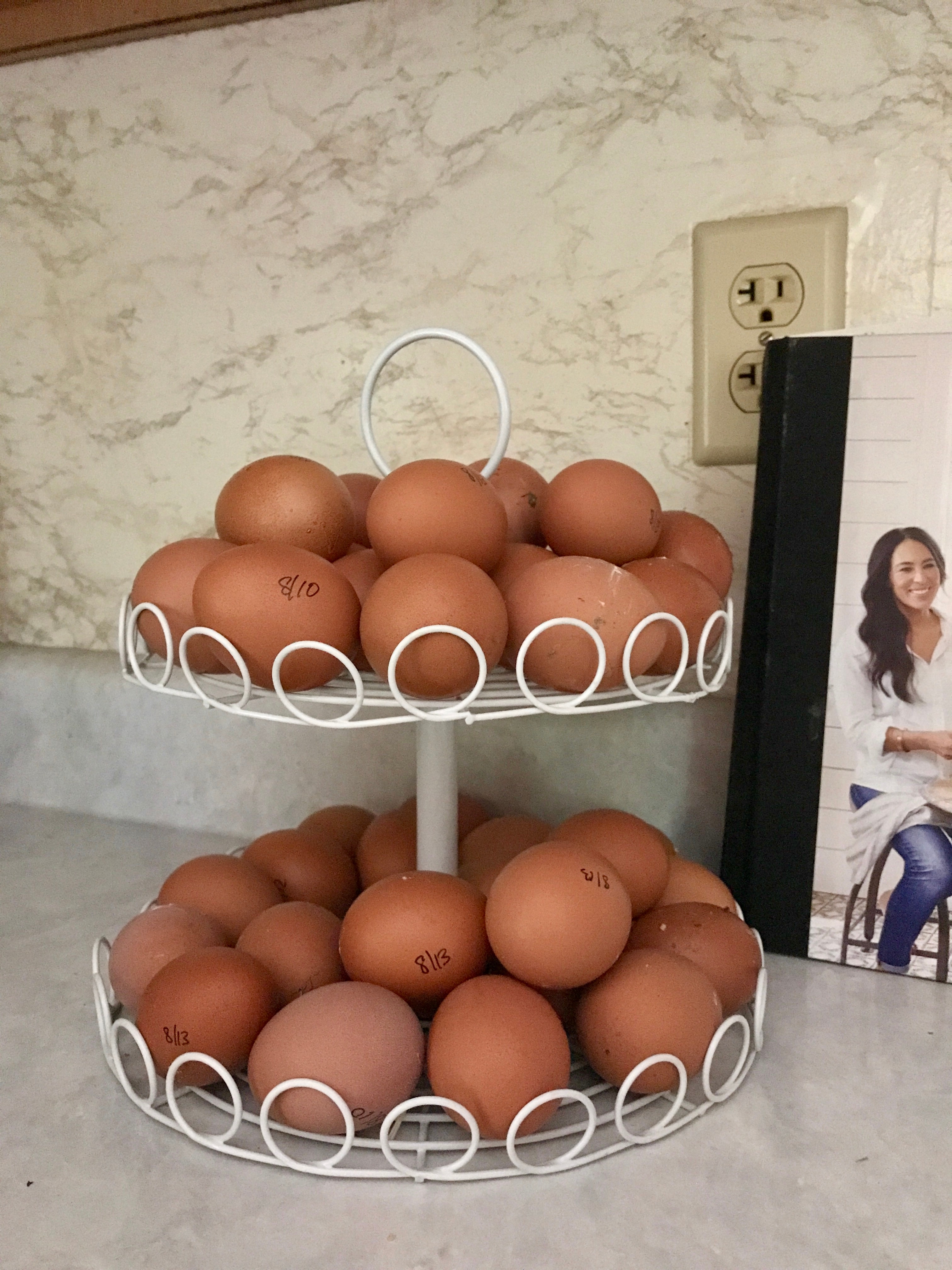 I spent the first few weeks widdling away at some notes and then reviewing them with Bob.

I knew I was heading in the right direction, so I mentally put the whole thing on the back burner as we went into our busy summer season (a.k.a. when our chickens FINALLY started laying eggs!).

We also made a pretty major shift in our organization in client services at IMPACT at the same time, so I focused on supporting my team through that, the speech, I figured, would take care of itself.

Time to Meet With Marcus

Can we all just take just a moment so I can Fan Girl Freak Out over the fact that I get to work alongside Marcus Sheridan?!

But, seriously - he is simply wonderful, so generous with his knowledge, and a wonderful coach.

Since many of us at IMPACT Live 2018 were first-time or still young speakers, we all had the opportunity to schedule time with Marcus to review our speeches.

I was especially nervous, not because he's Marcus Sheridan, but because I'm incredibly passionate about the topic of high-performers and my speech is actually the public debut of a theory that I've been forming together with Stacy Willis for the last year.

The importance of not only communicating effectively to the audience but ensuring what was shared is accurate and actually helpful for the people attending was not lost on me.

Plus, I hadn't really mentally devoted time to it for weeks and the pressure to get it right was on.

I spent all of Saturday at our local coffee shop Googling things like:

Dakota Hersey, a fabulous Account Executive here shared notes from an INBOUND session a few years ago that Tamsen Webster did and her resources ended up answering every single question above.

Using Tamsen's guide, I had a pretty solid outline of what I want to say on stage.

Actually, her outline even ended up becoming the foundation of a major section of the manuscript Stacy and I are co-writing on the topic of high-performers, but I digress.

The same Saturday that I ended up restructuring everything I had been working on, I presented the concept to Marcus.

Leaving that meeting with him, I felt so empowered.

He had wonderful insight on how best to present the information on stage and really helped me see that I was having a conversation on stage, not talking to a room full of car test dummies.

Honestly, in the weeks and even days leading up to the event, I wasn't super nervous.

I wanted to first make sure that my logic, data, and opinions were solid.

I met with Stacy, Dakota, and a few other team members I highly respect and knew would challenge me much, in the same way, someone hearing this for the first time might.

Each person I met with gave me a little more confidence that I had something worthwhile to share.

Seeing their faces light up and get excited about the things I was sharing was so cool. They also gave me invaluable tips like:

I'm so glad I spent this time crowdsourcing ideas, feedback, and insights!

Both nights of IMPACT Live we hosted Happy Hours.

These weren't any ordinary Happy Hours; These were the type that had you standing RIGHT NEXT to the speakers whose books you've read and keynotes you've watched -- Speakers like Ann Handley, David Meerman Scott, Dharmesh Shah, and Paul Roetzer. 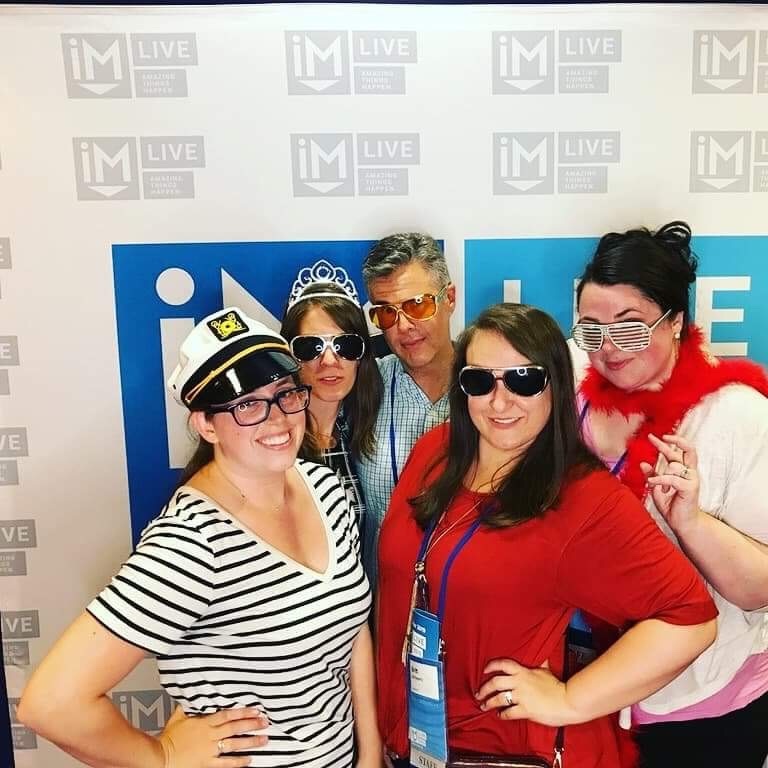 Let's talk about Ann Handley for just a moment.

This woman is whom I want to be when I grow up. Smart, funny, approachable, direct, and really incredibly likable. I could listen to her talk about shades of blue for hours.

She was the keynote for the first full day of IMPACT Live and she had all of us hooked from the moment she danced on stage in her Party Pants.

I had noticed the night before her keynote though that she was slightly more reserved than the person I watched bring concepts to life on stage.

She was still just as approachable and kind, but maybe a little more reserved?

Actually, Ann was so great she went LIVE with us during one of the Happy Hours and discussed this very thing! Check it out here:

Interestingly, I noticed the same about Marcus Sheridan.

I asked him about it and he shared that, as a speaker, you are giving so much of yourself on stage, that some speakers prepare by going inward ahead of their talks...Even the most experienced ones.

While I thought that was cool, I figured I didn't really know what that meant and totally forgot about the conversation until I woke up the morning of my speech.

I woke up on Wednesday morning definitely inward.

That's so weird to type, but it's true. I wasn't really in the mood to talk to a lot of people, even the ones I love, so I took extra time getting ready at the hotel.

I ran through my speech a few times before leaving the hotel, but doing that made me feel worse because both times I was three minutes OVER my time slot. Ugh.

As soon as I got to the venue, I went back to the green room and spent time with one of my favorite people in the world, Kyle Sheldon. Kyle is a developer here at IMPACT and over my time here, we've become close.

He listened to me, told me to suck it up, and told me he knew I would kill it.

If you're preparing to do something terrifying like this, I suggest you surround yourself with people like Kyle.

Roughly 30-minutes before I was needed on stage, my husband text me this image: 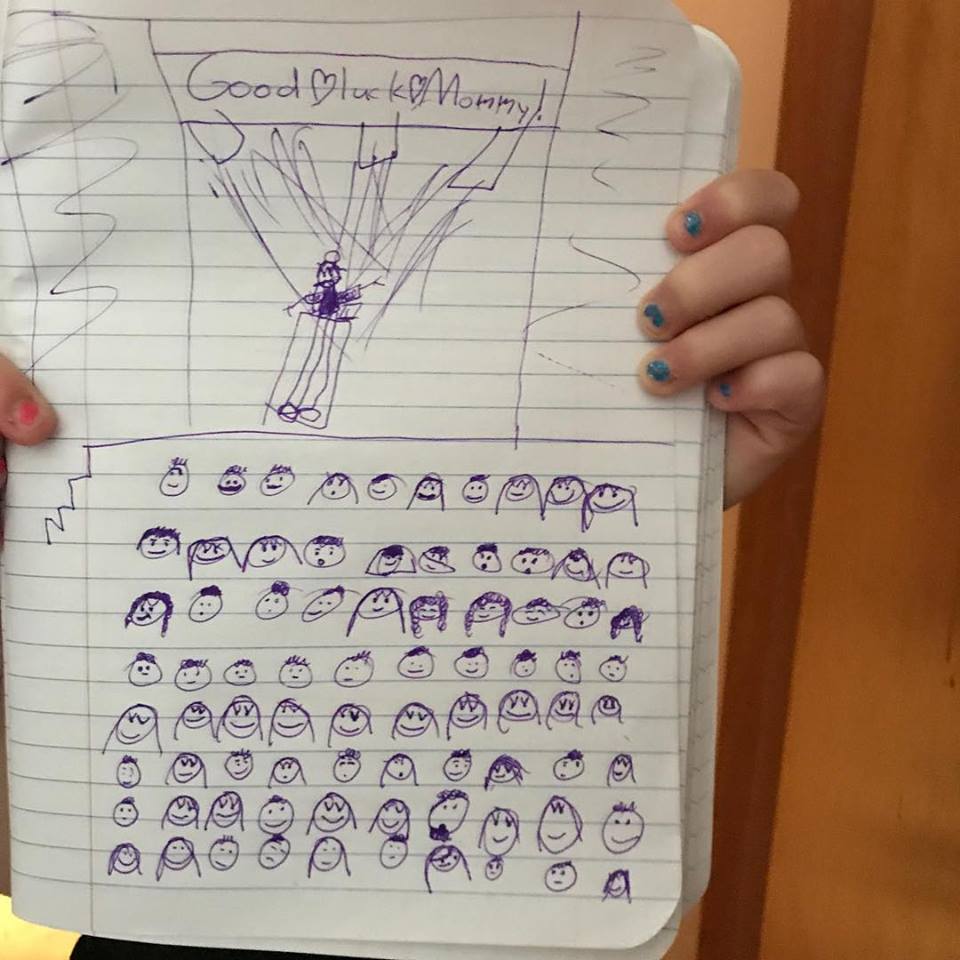 That, my friend, is the picture my nine-year-old daughter made me for good luck. Cue the tears.

Then, it was showtime.

Getting mic'd and being backstage for the first time is indescribable.

You're preparing to do something that you've never done before, saying things that might make people uncomfortable. If you're like me, your boss put his trust in you and you have this one shot to get it right. No retakes, no reshoots, just this one shot.

Anyone else hear Eminem in their heads right now?

And Then It Was Over

I walked out on stage toward Bob's , took my shoes off, and started talking. 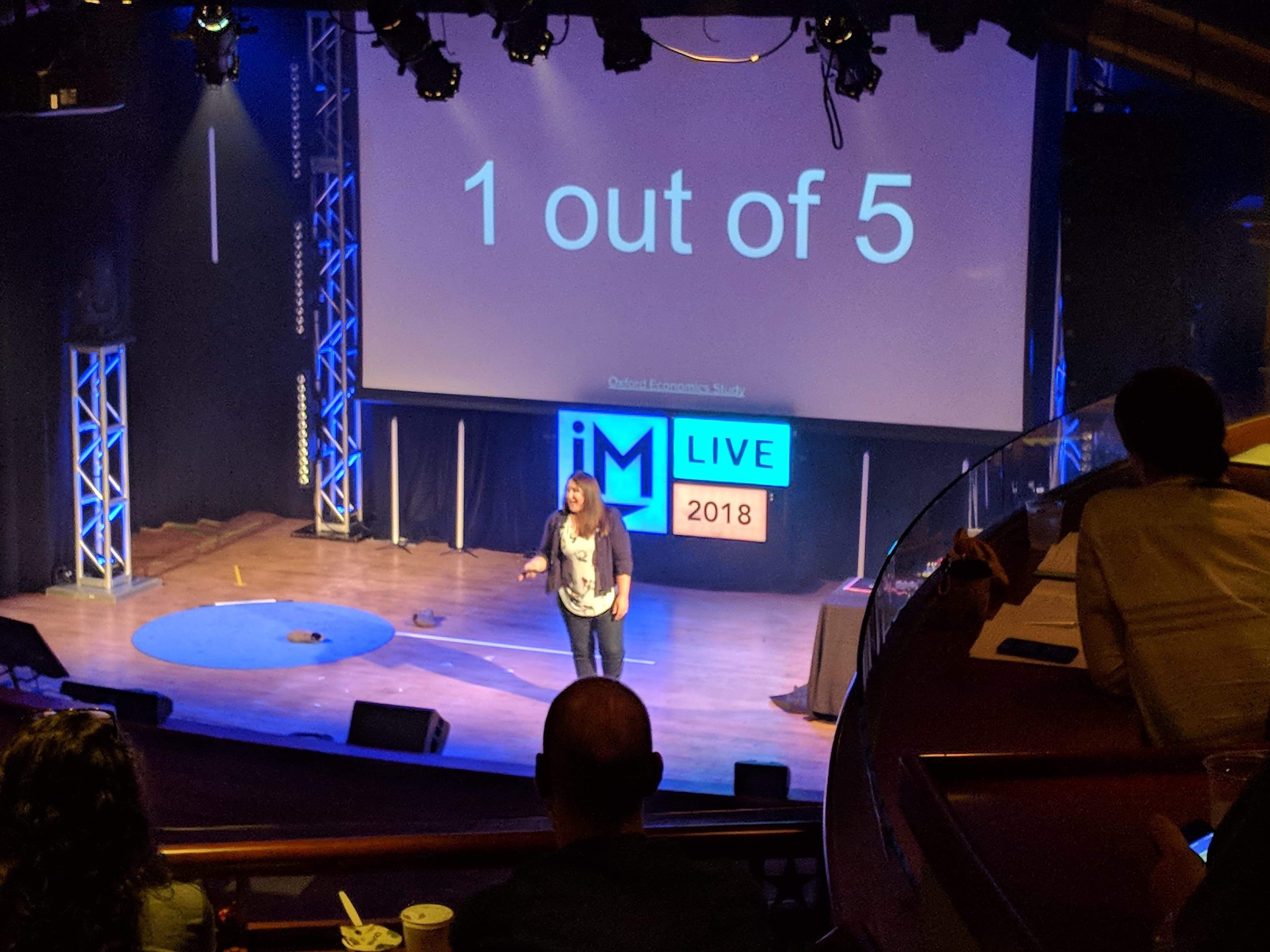 I had hit every major point I intended!

The audience was engaged; They even laughed -- and I had 30 seconds to spare!

I spoke in front of hundreds of people and didn't pass out.

When I walked off stage, I found Kaitlyn Petro, an IMPACT Account Executive I've also developed a deep friendship with, waiting with her arms open.

The most impactful thing I walked away from this experience with, though, is how supported I am here at IMPACT and in our community.

Every person I spoke to helped mold what I would say on stage.

My tribe was there and I've never felt more connected to a team like this in my career.

From Bob putting his faith in me and giving me this opportunity to Marcus being so generous with his time, to Jason Linde, our PPC Specialist, recording my speech so that my husband could see.

This experience is one I will never forget and I can not wait to polish my speaking skills, refine my message, and help Ann Handley, Sheryl Sandberg, and Bréne Brown bring more women to the stage.

We'll be back next week with a normal episode, but in the meantime, if you have some tips, email us at markether@impactbnd.com. We will share it on our Facebook page!!

Mindful Meditation is Not Easy. Tips from Chris Duprey on How He Got Started! [MarketHer Ep. 57]