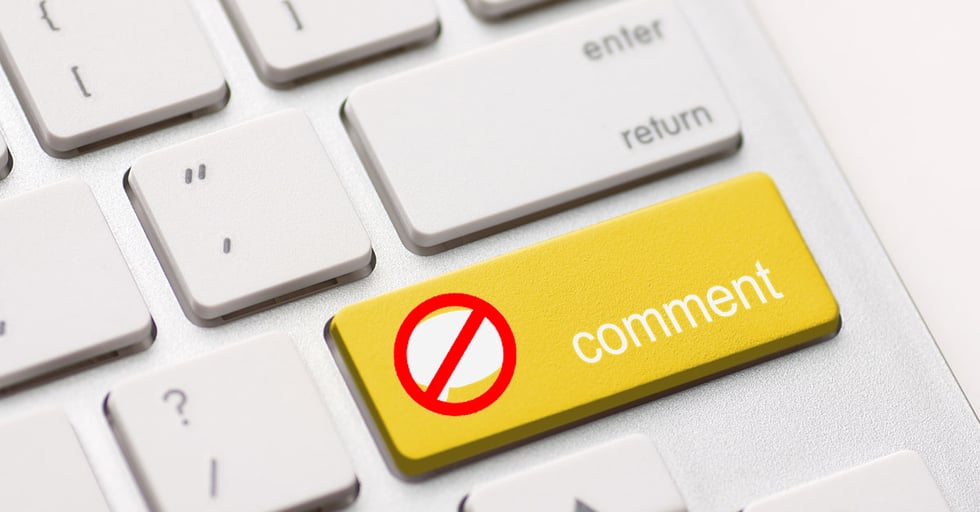 Since the dawn of time (well, at least the dawn of American newspapers) there's been a way for readers to respond to the content they consume.

Long before the internet, readers would handcraft letters to the editor and mail them into the local (or national) newspaper. These were typically found at the beginning of the newspaper or magazine and were very relevant due to the screening process of reading and printing the letters.

These letters were a great way for readers to openly debate political or social issues and share their thoughts and opinions with others.

In the late 1990s and early 2000s when media outlets began publishing their content online, a new means for reader feedback was developed -- the comment section of an article or post.

However, in recent years, comments have begun to decline in use.

A Brief History of Online Commentary

“Comments sections are really just a continuation of that age-old tradition of letters to the editor, a cherished part of many publications and a valuable way of creating an open dialogue between magazines and the people to whom they are ultimately accountable,” wrote Jonathan Smith of Vice News.

To some degree, this concept was an experiment to see if the traditional method could carry over to a less controlled environment. The biggest difference between letters to the editor and online commenting, of course, being the moderation and selectivity factor.

Over the years, many companies have begun to realize that it is nearly impossible and highly cost prohibitive to adequately moderate and oversee who and what is posted in the comment threads of every single article they publish.

Additionally, more are finding that the comment threads are not meeting the mark when it comes to encouraging debate and engagement, but rather becoming filled with spam.

In recent years, it would be rare to find a news publication, media company, or even a blog that lacked the ability for readers to submit comments.

It’s come to be expected that when reading an article you can voice your opinion, no matter what it is, to the writer and anyone else reading by simply posting a comment.

However, in the long run, the comment section for most outlets has failed.

Research shows that most comment sections found on news sites, and the like, are overwhelmingly filled with spam or negative comments from trolls, anonymous contributors who make it their mission to hijack comment threads with offensive and inappropriate submissions.

For this reason, many outlets like Google, NPR, and Vice News have done away with comment sections altogether.

“Over the years, we read thousands of comments we've received on our blog posts on the Google Webmaster Central blog. Sometimes they were extremely thoughtful, other times they made us laugh out loud, but most of the time they were off-topic or even outright spammy…”

"After much experimentation and discussion, we've concluded that the comment sections on NPR.org stories are not providing a useful experience for the vast majority of our users," wrote Scott Montgomery, former managing editor for digital news, in his 2016 farewell-to-comments address.

So What’s Next for Reader Engagement?

The move away from comments is far from unique or new.

The trend actually started in 2013 when Popular Science become one of the first major publications to do away with its public comment section.

While they cited scientific studies that found that blog comments can have a profound effect on reader’s perceptions of science, they also agreed with the general consensus that comments were not as effective as they could be.

Public engagement is an integral part of any media company and something that definitely needs to be considered as companies move away from the use of comment sections. To help, many publishers are turning to social media as an alternative for building engagement, invoking discussion and creating community.

Personally, I love this trend and think it’s a great opportunity  for modern marketers to capitalize on engagement and community building with their audience.

For readers, responding via social media provides a faster, more engaging way to build conversations and be heard by the content creator as well as others in the community because it’s a platform they’re already using.

And to a degree, it acts as quality control, because users must sign into a social media account.

At IMPACT, we’ve made the change from comment threads to community as well!

In our most recent website update, we too removed the ability for readers to post comments natively, instead, encouraging readers to join our community to provide feedback and engage with other like-minded folks there.

We’ve had incredible success with it so far and no one seems to miss the comment section at all.

What are your thoughts on the demise of the comment section? Join us in IMPACT Elite and let’s keep this conversation going.

Free course: How to create a content strategy for your digital marketing (+video)

By Stephanie Baiocchi on March 8th, 2019

By Stephanie Baiocchi on March 8th, 2019

LinkedIn is Rebuilding Groups and They Could Make a Massive Comeback