When Did "Nice" Become a Bad Word in the Workplace? 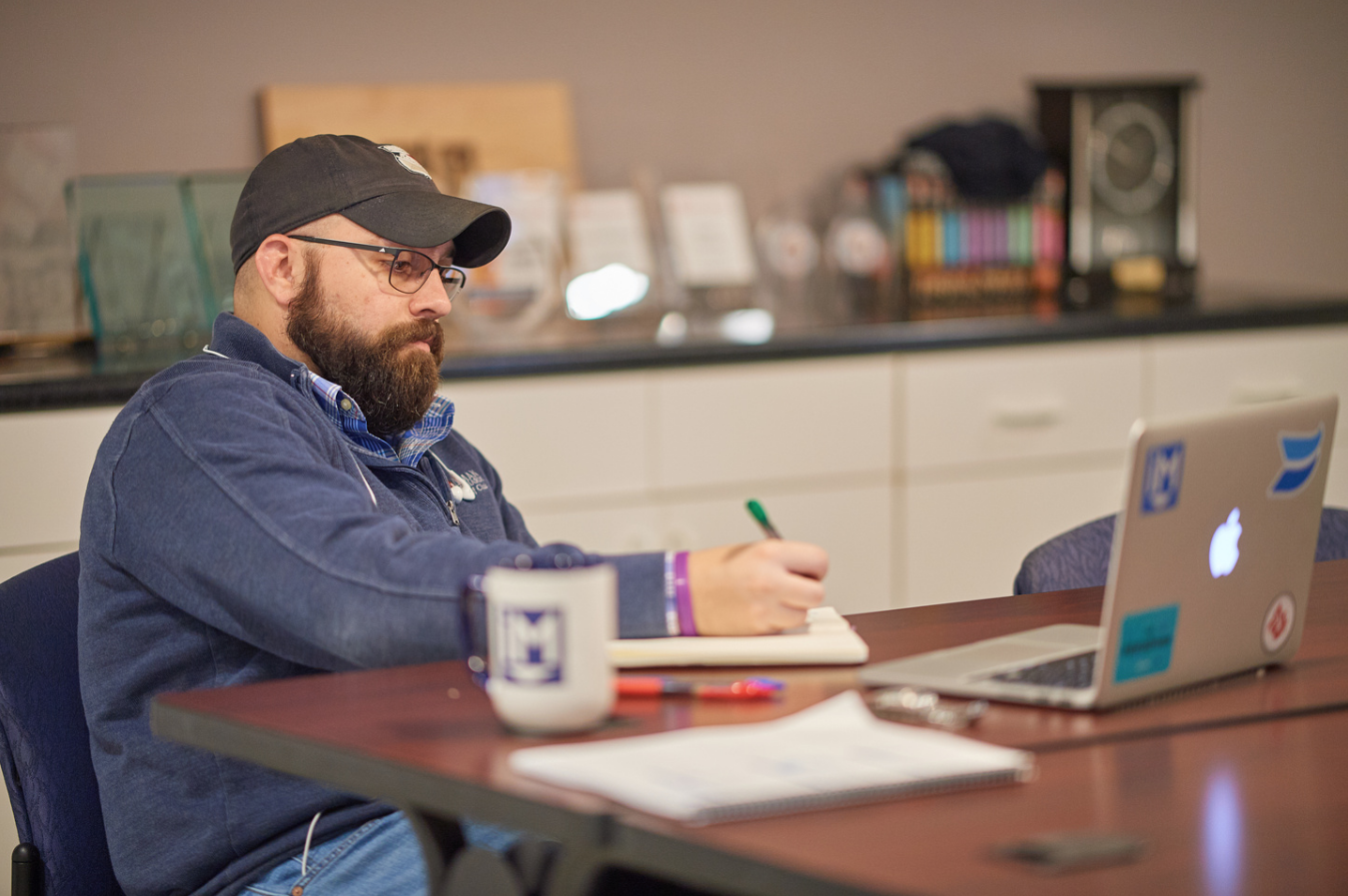 Why does "nice" automatically make us think "weak"?

When I was first asked to think about this and to write about it, I didn’t think I had much to say, until IMPACT Director of Web and Interactive Content Liz Murphy showed me the the search results for “being nice at work.” 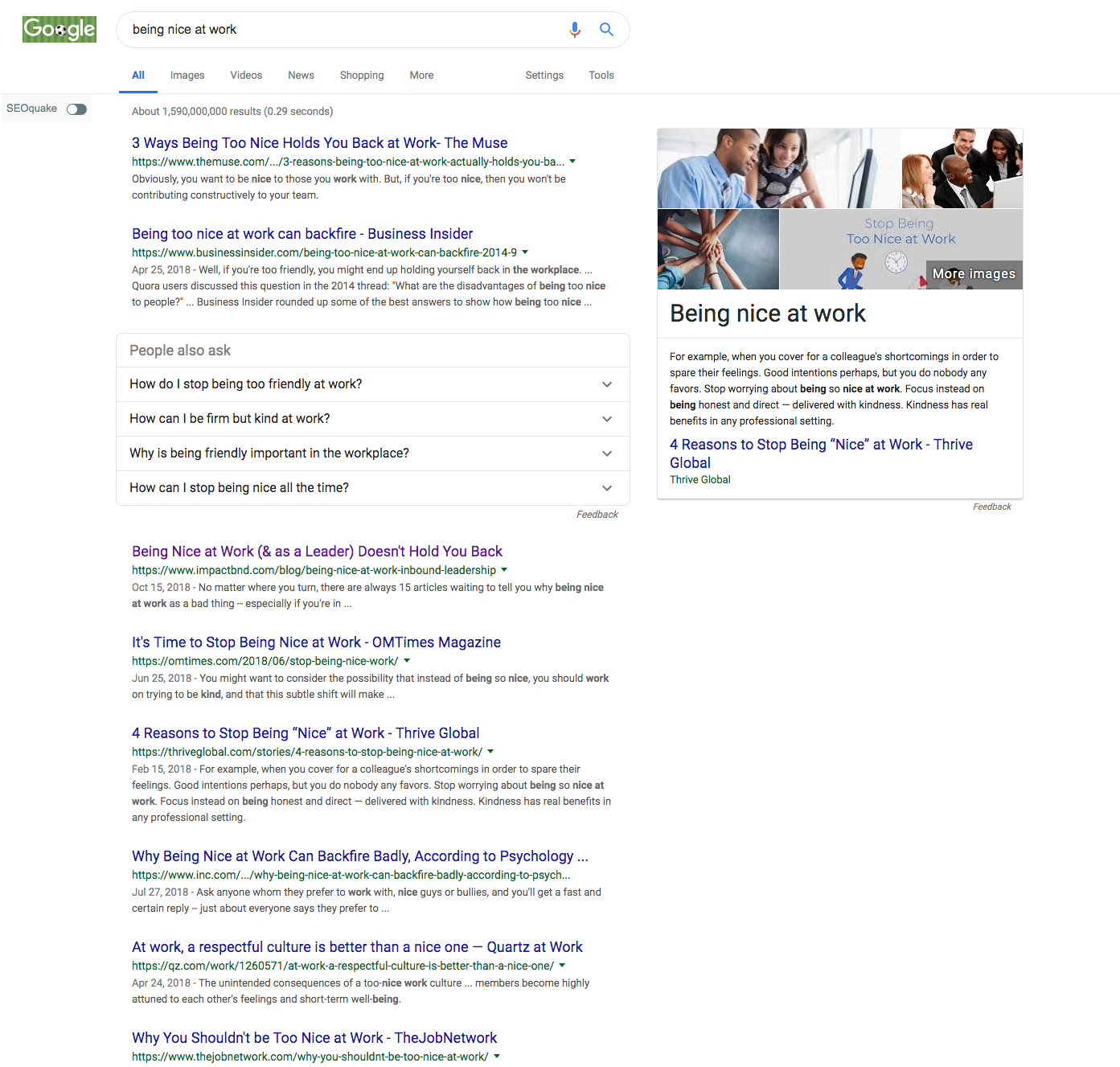 Every single result -- other than the article written by IMPACT VP of Services Brie Rangel -- reinforces this idea that being nice at work isn’t good.

That being nice it is a sign of weakness, or it is something that will hold you back.

As Liz showed me these results, I felt a lot of sensations rise within me. I started to feel anger -- you know that deep turning in your stomach, the constricting of your upper body…  I was overwhelmed for a moment with this frustration.

I’m pretty good at feeling these emotions arise, feeling the warning signs of potentially losing my cool and becoming reactive. So, I let it happen. And it went on for some time.

I simply couldn’t understand how people thought giving advice about not being nice was a good thing! With all of the issues people are facing today, why would anyone think that being nice was bad?

How does this help our society?

I then started to think about the state of the American workforce -- where an overwhelming majority of people are not engaged at worked according to Gallup. Burnout has just become an official medical condition according to the World Health Organization. And workplace anxiety is becoming more prevalent.

Still, the leadership "experts" say being nice is a bad thing.

What is going on? From where I'm standing, we have a huge niceness gap.

People don’t see each other. We are so focused on ourselves, that we forget our actions and inactions, both verbal and nonverbal, affect everyone around us. Yet these leadership myths that shrug off niceness as a barrier to giving good feedback or as an overall weakness persist.

Let me explain why.

It Begins with Intentional, Specific Communication

This year we’ve made a huge investment in leadership development and in developing our team, with a huge focus on communication. Leadership and communication go hand-in-hand, in my opinion. So, as we looked at what IMPACT, as an organization, needed to focus on to achieve the goals we had set for 2019, these two areas came to light.

We knew our people needed great leaders who were there to empower them to do their best work and live their best life, and we needed to ensure everyone had a shared language around communication.

One that allowed us to be more intentional and concise.

One of the key aspects of this program is centered around feedback -- both how to give it effectively and how to receive it. Feedback is tough, and it makes us uncomfortable, whether we’re giving it or receiving it.

When organizations and leaders don’t know how to give feedback it creates issues, which can range from the fact that they don’t give it, to giving it in a way that makes people feel small or less than. When people don’t know how to handle receiving feedback things like burnout, overwhelm, or reactionary outbursts can occur.

As leaders, we need to be good at both giving and receiving feedback.

The first thing we talk about with feedback is that it has to be specific and it has to be about what occurred, not about the person.

Kim Scott talks about this in her book Radical Candor. “Radical candor” is a principle which she defines as the ability to challenge directly and care personally. (For those who are interested, Brie wrote a great review digging into much more of the book.)

Here is an excerpt from Radical Candor that highlights a concept very important to this notion of giving effective feedback -- being specific:

Being precise can feel awkward.

For example, I once had to say, “When we were in that meeting and you passed a note to Catherine that said ‘Check out Elliot picking his nose–I think he just nicked his brain,’ Elliot wound up seeing it. It pissed him off unnecessarily, made it harder for you to work together, and was the single biggest contributing factor to our being late on this project.”

It was tempting just to say, “Your note was childish and obnoxious.”

But that wouldn’t have been as clear or as helpful. The same principle goes for praise. Don’t say, “She is really smart.” Say, “She can do the NYT crossword puzzle faster than Bill Clinton,” or “She just solved a problem that no mathematician in history has ever been able to solve,” or “She just gave the clearest explanation I’ve ever heard of why users don’t like that feature.”

By showing rather than telling what was good or what was bad, you are helping a person to do more of what’s good and less of what’s bad, and to see the difference.

When we aren’t specific we leave things open to interpretation and we set the conditions for our people to start telling themselves elaborate stories.

This is where nice has gotten a bad rap.

I want you to be honest with yourself here, have you ever said something like:

“You’re too nice,” to an employee, when you really meant, “You weren’t firm enough with David on the lack of specifics in his pitch”?

You may have thought you were saying the latter when you said they were too nice, but you didn’t.

I am guilty of this.

It’s an easy trap to fall into at times.

For me, it usually manifests when I assume that everyone has a general understanding of what I’m talking about, that we have a shared level of depth in the area. When this happens, I oversimplify, I make assumptions.

The key here is being aware of this within yourself, so you don’t continue to do it.

“If Nice Is a Weakness, How Can It Be Strength?”

I’ve worked for a ton of people in my career -- some more effective than others.

Of all the great leaders I’ve had, they all seem to have shared a singular quality that is virtually impossible to fake -- they genuinely cared about their people and their mission.

You could see them struggle, internally, when they had to make a choice that put the mission ahead of their people. They had empathy, compassion, and were human... and we knew it.

I don’t know that the label nice is one I would have used with these leaders when I was serving under them. But in hindsight, I think it is fitting.

They were simply good people.

People I counted on for guidance, coaching, inspiration. They always treated me like a human, not simply a means to an end. When I needed something, they were there, no matter what.

(While this isn’t exactly the definition of nice from the dictionary, its good enough for me.)

These leaders were the opposite of weak. Their demeanor and caring nature made them stronger than any of their peers. These were the leaders that created more leaders. They were the ones who would live on forever, not because people feared them, but because people like me would continue to tell their stories and attempt to lead in the same way that they had.

When we think of nice, we shouldn’t hear weak; we should hear human, compassionate, caring.

When I think of what this looks like I am reminded of one of my mentors, Lieutenant Colonel (LTC) J. Adam Barlow. Adam was my first boss in the 82nd Airborne Division and basically my battle buddy in Afghanistan.

I worked directly under Adam on the brigade staff for about a year. After that, I moved into company command and he became my battalion’s operations officer, meaning we got to work together even longer!

When I think back on how I’ve come to view leadership, Adam is an example that stands out. He got the best out of me and everyone that was around him. He had a superpower to make people their best.

He wasn’t the loudest. He wasn't in your face. He was simply himself.

He was a paratrooper, he was a native of Appalachia, he was a Christian, he was a husband, father, friend… he was genuine when he gave feedback, and I knew he truly cared about me as a human and as a paratrooper.

He was an inbound leader, years before I started to define what I believed that meant.

I’m not going to go into great depths with not nice, other than to share that in my personal experience, leaders who I would characterize as not nice, were generally less effective.

They would suck all of the motivation right out of me, getting nothing more than compliance.

The leaders who were nice -- compassionate, human, caring -- those leaders got full out commitment from me. I would have followed them anywhere, at any time, no matter what.

What Would Be Possible If More People (& Leaders) Were Nice?

I love to think about things in the “what’s possible?” realm. If we don’t do this, we tend to stick with the status quo… "This is how things have always been done. We don’t innovate, we don’t dare, we don’t create."

So, let's do it here. If more people were nicer at work or at home or, quite frankly, wherever they are, don’t you think the world may be a bit better?

Maybe more people would be engaged at work.

Maybe we’d have more leaders who led with compassion.

Imagine what your life would be like if those things were true. First and foremost, I’d assume that our relationships with others would be stronger and more meaningful.

Now, imagine what's possible inside an organization, where its people embrace this kind of mentality. We’d be more effective and more efficient, we’d deal with fewer people issues, and we'd get to focus more on our actual work.

When we think about what’s possible, it makes me laugh to think that so many others think that being nice is going to set us back. It is going to make you less effective at the office, in life…

So, Should You Be Nice at Work?

Yes. Of course, you should.

If you want to simply get ahead and you don’t care about how your actions affect others, I don’t know what to tell you. Hopefully, I've been able to show you that there is, at least, another way.

Nice shouldn’t be seen as a negative.

As leaders, we need to dig deeper. We need to do the real work and not worry about if we’re “too nice.” That’s complete hogwash.

Nice isn’t a four letter word -- it’s something we all could be more of the time.

For me, I want to lead with compassion, with care, with my whole heart. This is not saying that I’m never stern or authoritative; it simply means that my intentions come from a place of love and compassion.

I don’t know that people would label me as nice.

But if they did, I’d wear it as a badge of honor.

Alignment: Why revenue is the #1 metric for sales and marketing teams

What does a virtual event sponsorship actually look like?

Why trust is the true currency for any business