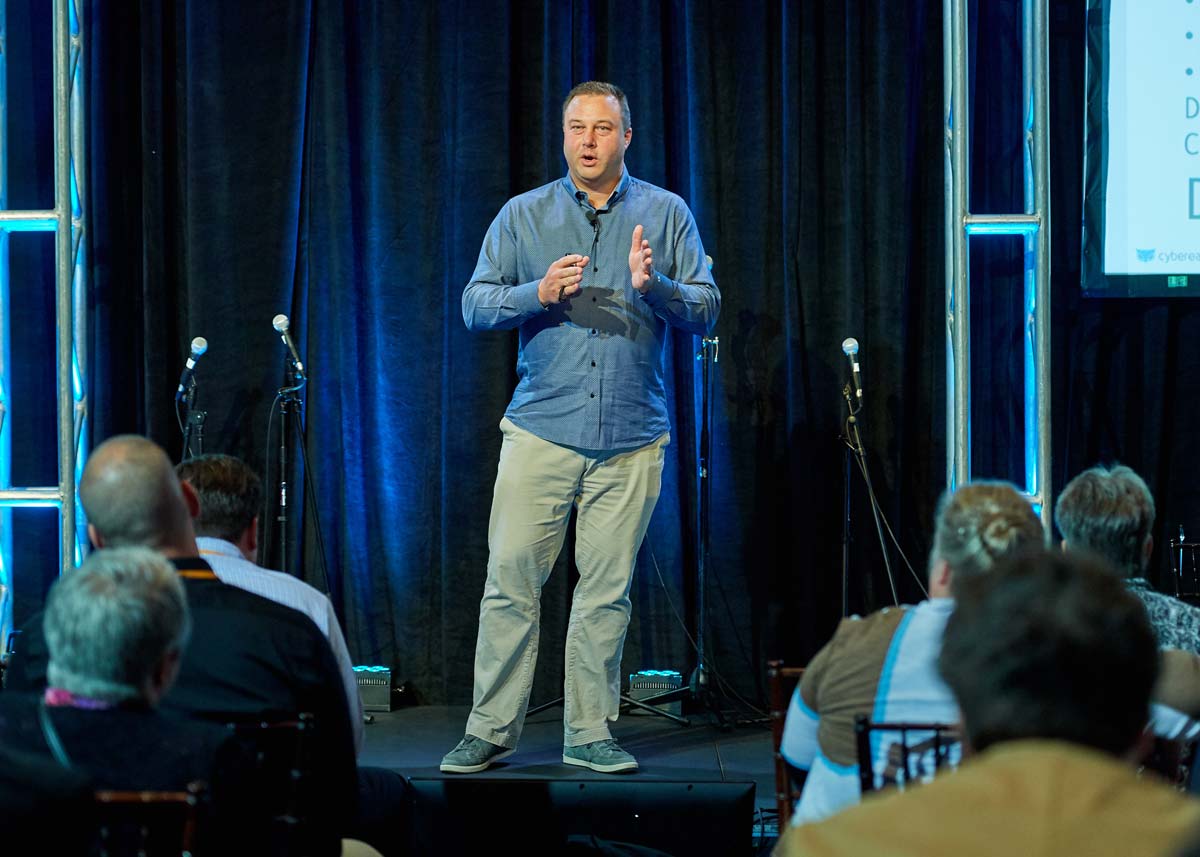 We all know account-based marketing is nothing new. It’s been practiced for years.

Enter, Mike Volpe, CMO of Cybereason and for those of you who don’t know, former CMO at HubSpot.

It’s been really cool to observe his transition from leading a team of inbound-driven marketers to a more balanced marketing approach at Cybereason where his team is tasked with reaching CIO and CSOs - a.k.a.decision makers that are notoriously ghost-like online.

Volpe was recently a featured guest on an SBI podcast entitled, “How A-Player CMOs Implement Account-based Marketing, ” and discussed this.

Lately, our team at IMPACT has been receiving a lot of questions about ABM and how it should fit into a marketing mix, so I decided to take a listen to hear what Mike had to say. Here are some of the insights he shared about some of the most common ABM questions and concerns:

When Does ABM Make Sense?

Volpe mentioned there are two key times an  ABM mindset would make sense:

Both of these situations, however, come with the premise that the campaigns are highly-personalized and focused on target accounts versus lead-based or individual contact-based marketing.

When the focus is on a marketing and sales plan for the entire account, versus marketing or sales delivering messaging to an individual contact within an account, that’s where opportunities are created.

Volpe is direct to point out that, “If you’re selling bigger deas and you’re not doing ABM, then you probably are doing something wrong.” He also mentions that ABM is a different access than inbound or outbound (alone) and that ABM can be both inbound and outbound, it just depends on what type it is -- Big ABM or Small ABM.

Less is more in terms of the number of target accounts, according to Volpe.

One sales rep could have 20-50 accounts that are being targeted, but, the same plays aren’t being run in each account.

For instance, manufacturing and financial services are both verticals that Volpe mentioned are an area of focus.

Each vertical could encompass about 4-6 accounts inside the sales reps total number of target accounts, so the verticals are bucketed. Then, each bucket would have its own go to market motion running alongside the others.

From there, each bucket will likely have different campaigns running for each of the personas in it. Volpe says, “With Big ABM it has to be customized not matter how many plays you run.”

Volpe’s definition of ABM wasn’t highly-defined but he does stop and recognize that even on a deal size of about $50k (Small ABM, if you will), there are different buyers involved.

Unfortunately, custom marketing investments can’t be made in every “small” deal.

The move here from a strategic standpoint would be to identify perhaps a few contacts per account, a user, an economic buyer and an executive - all different personas - and customize and coordinate your marketing and sales messages accordingly, even if it’s only electronically.

Bottom line, Volpe says that if you are “hitting a wall with demand gen, then it’s something you should dive into.”

ABM doesn’t just happen. It takes a lot of coordination across an organization to pull it off successfully. Define roles and responsibilities of each role before a program is implemented so that the campaign runs smoothly.

In Q4, marketing targeted all of the target accounts that weren’t already in the forecast for the quarter. The goal was to run four plays within each of those accounts. Sales reps play the role of star quarterback with authority to call an audible in the process if needed.

Both are supported by sales ops and enablement, demand generation, and marketing ops in order to pull off the plays successfully.

The company also takes ABM all the way down to the street level with field marketers who work closely with regional vice presidents, letting them know what plays are available and helping them run the right plays locally.

Volpe says, “A lot of times field marketing has been a glorified events position, in actuality under the ABM playbook it’s more like a mini CMO position. They need to understand everything that’s happening in the marketing mix and bring that to life on a local level.”

It starts with account identification. Marketing may come to the table with data about the accounts they want to target and why, but sales needs to identify and fully buy into which accounts make the list.

Then, marketing serves up a plan. It’s a symbiotic, mutually agreed upon process.

As Volpe explains, “At the end of the day, the rep needs to be the one making the call, I mean they are the one that’s got to have the ultimate responsibility (over the sale) and I think marketing needs to respect that. Marketing’s role is to bring as much to bear and bring as many plays to the table as possible and work with sales to work right (target accounts) so we can all hit the number.”

It’s not just strategy and playbooks the marketing and sales team align on. They also share in the responsibility of reporting up, sharing best practices, and reflecting on won/lost deals.

Rather than sales and marketing having individual meetings with the CEO, Cybereason has joint ‘go to market’ revenue driving meetings with CEO. In addition to those meetings, weekly dashboards get shipped out to entire management team, which keeps everyone in the organization on the same page.

Identify which reps are having success and figure out a way to share it. At Cybereason, the team has weekly sales training calls and the regional VPs and sales leaders often identify a rep who is having success and the rep will come into the meeting and talk about what they are doing and how it is working for them.

Volpe mentioned his team adopted Agile Marketing and he believes that’s really contributed to its velocity. They do examine won and lost deals, but most importantly won deals. Understanding, from a marketing perspective, which touch points moved the deal along and how you can repeat that is what he finds most helpful.

Working with your Sales and Product Teams

Just like any marketing initiative, it’s also important to be aligned with your sales and product teams.

At Cybereason, they have five ranging from a lower-level security analyst to VP of Security or CSO, CIO, CFO, COO, or maybe even CEO.

You do this to figure out what plays you should run between marketing and sales for each persona.

It’s here that marketing sets up the playbook that can be mixed and matched for each account.

For a big financial services firm as the target customer, there was both an analyst-level campaign and an executive level campaign.

The analyst-level program included reaching out with direct mail of promotional items like nerf guns and t-shirts or other gadgets and engaging the analyst with technical content.

At the same time on the executive level, a workbook entitled “What Does NextGen CSO Look Like?” was delivered alongside a program that offered Bose headphones in exchange for taking a meeting.

The team also set up executive and technical-focused events for each persona and even tee’d up references willing to speak with these targeted accounts at the beginning of the sales process, as opposed to later on in the sales cycle.

This dual approach helped establish relationships and early buy-in from several levels of the organization.

Volpe didn’t get specific about the results they saw from this or how sales were involved in the process, but I imagine sales reps follow-up coincided with FedEx delivery times. As a result, timely contact, interests were peaked, appointments were scheduled and new opportunities made their way into the pipeline.

Can I Get an AMEN?

I’m not even sure that my excitement is completely captured by this gif. I absolutely love to hear Mike Volpe, the “godfather” of inbound marketing, talk about a more traditional, enterprise, approach to marketing and sales.

I followed up with him and asked, “What was different about ABM 10-15 years ago?”

Mike said, “There are a lot more technologies now, especially in terms of data availability and digital ad targeting and personalization. The biggest difference is that you can do some ABM online, that wasn't really possible a decade ago.”

So, while it can be tempting to talk to your inbound marketing agency only about digital marketing it’s also really important to tell them about traditional marketing efforts. Not only can your agency help you deliver those messages online -they can develop a healthy mix of targeted inbound and outbound techniques to help your organization accomplish its goals - and make you the A-Player CMO your CEO wants you to be.

If you are interested in going at it alone, HubSpot has outlined 5 stages of ABM that align with inbound marketing.

How to get sales excited about creating content for your company

8 best marketing events to look forward to in 2020

Why most people will fail at sales enablement in 2020

How to convince your boss you need an inbound culture workshop

By Melanie Collins on November 8th, 2019

By Melanie Collins on November 8th, 2019

When We Ask for Sales Enablement Content, This Is What We Want

Should You Facilitate Your Own Inbound Culture Workshop?

Selling In the Digital Age: Why Every Sales Pro Needs to Understand Digital Marketing

Top 6 Metrics Every Sales Team Should Be Tracking

"The Past, Present and Future of Account-Based Marketing Ft. Sangram Vajre of Terminus" (Inbound Success Ep. 80)

Account-Based Marketing + Inbound: A Match Made in Heaven

What is Account-based Marketing Anyway?

How to Measure Social Media ROI in B2B Marketing