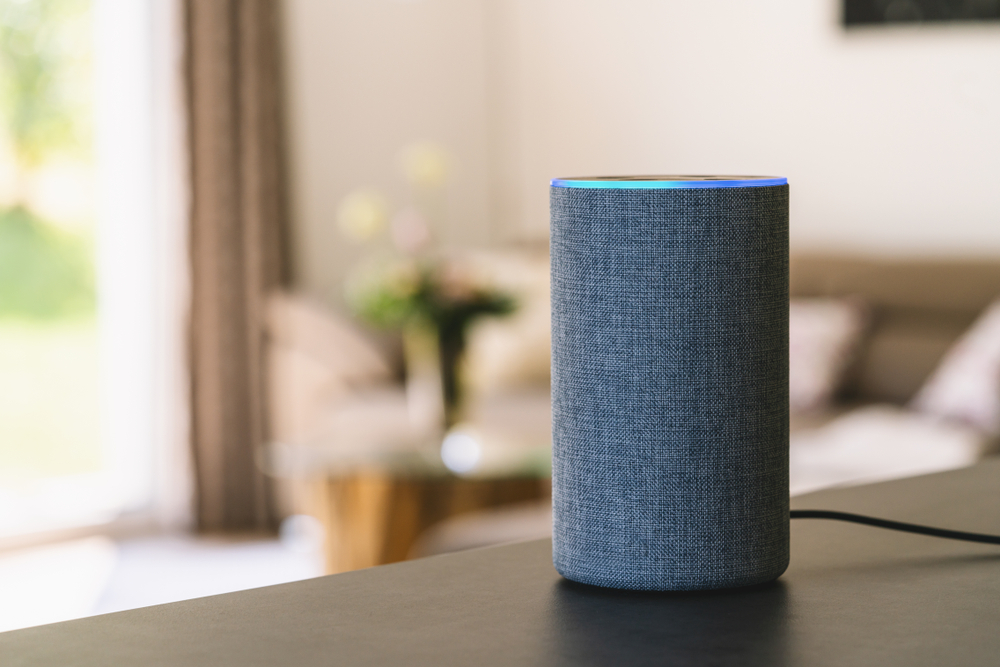 When Smart House aired on Disney in 1999, I think I can speak for the majority of millennials when I say that it was definitely a dream home.

Fast forward 20 years (realizing it’s been that long hurt me), many of these devices have become a reality in the average household.

Instead of “Pat,” the movie’s AI personal assistant that can manage various household tasks, we have real home assistants like Amazon’s Alexa and Google Home.

To be honest, the movie predicted a lot of what we use virtual home assistants for today - home security, changing the temperature, making calls, setting reminders, etc.

However, one thing they didn’t predict is how this technology would influence consumer behavior over time.

To better understand how these real-world smart devices are being used by the modern consumer, Microsoft conducted in-depth research on the role digital assistants play in our lives.

The findings are telling of the current state of this technology, but also provide insights into where it’s quickly headed.

To view all data from the research, you can view Microsoft’s full study here. Below is a summary of key findings for marketers to take away.

Finding #1: Voice Assistant Use Is on the Rise

When we think of “voice assistants,” our minds tend to immediately go to a device like Alexa or Siri.

However, more things are increasingly becoming voice-controlled than we may realize.

Even if you don’t have a smart speaker, or even a smartphone, the typical consumer has likely interacted with some form of voice control in the past few years, as seen in the chart below. 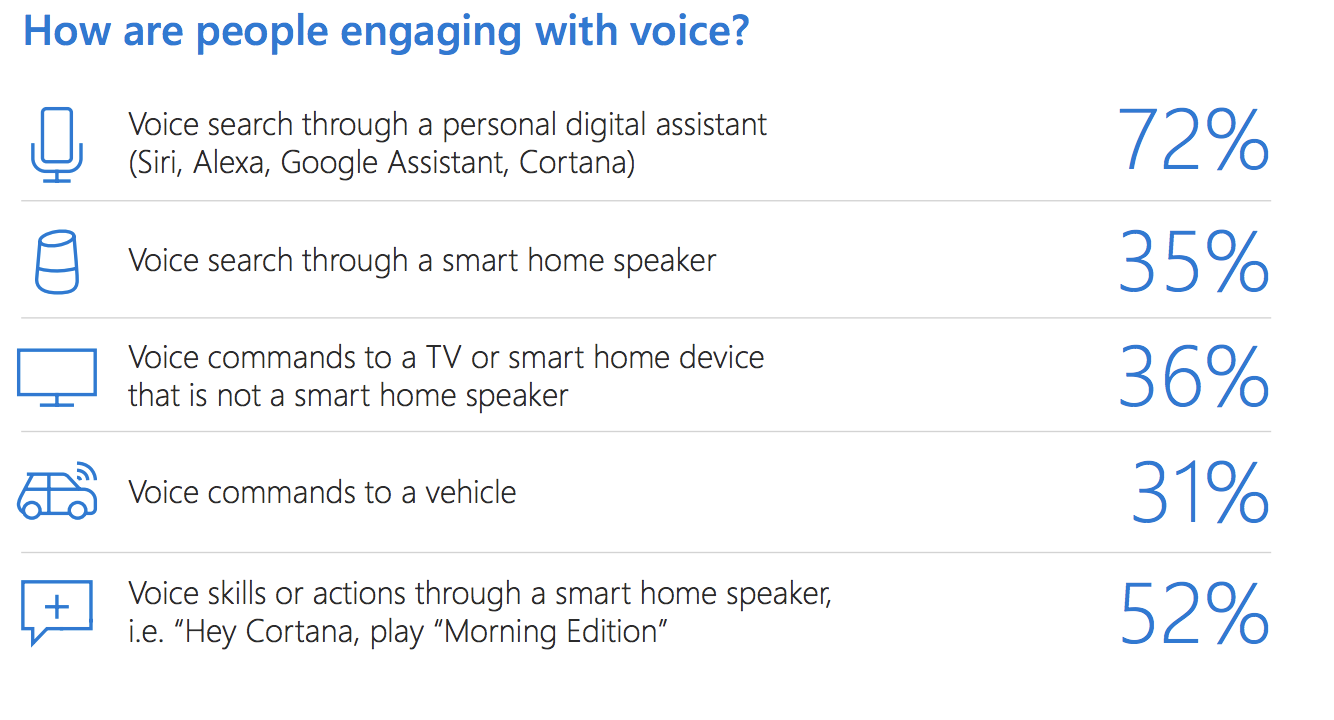 As you can see, while the majority of respondents reported interacting with a digital assistant, there were also several other voice-controlled features, including cars and televisions that users reported.

This shows that people are becoming more and more comfortable engaging with voice across the board.

For this reason, it makes sense that the study also predicted that 75% of households will have at least one smart speaker by 2020.

After all, if people can give voice direction in their car, for example, eventually they’ll want that same ease of use to control other aspects of their lives.

Moreover, as home assistants are becoming more affordable, they’re no longer seen as a “luxury” household item, but as  accessible for the average household to take advantage of.

Because this industry will likely grow even more in the coming years, it’s important for marketers to adapt their strategies accordingly sooner rather than later to stay ahead of the curve.

In the digital marketing space, the conversation around digital assistants and smart speakers tends to center around optimizing content around how people speak, not how they type.

However, this initiative is often deprioritized, as it seems to “far out” to dedicate the time to these activities.

In reality, Microsoft’s study found that the time to prioritize this may be sooner than we think.

Of the 72% of respondents using digital assistants, over half reported using voice as their preferred way of making small requests or questions. While some use a combination of voice and typing, only 9% favored typing requests.

So, if you’re not optimizing your content for voice search, you’re potentially losing out on a big market segment using these capabilities.

I know what you’re thinking, “Sure, but people are using these for daily tasks, not searches that matter to my business”

But that’s not necessarily true!

While 53% of people do use digital assistants and smart speakers primarily for household tasks like controlling music, temperature, or lighting, people are also beginning to use these devices for more shopping-driven behaviors.

Based on the chart above, it’s clear that people are favoring voice for more actions that matter to your business across different areas of the sales funnel.

From awareness activities like researching (44%) or comparing (31%) products or services, to adding items to your shopping cart (26%), all the way to making a purchase (25%), it’s possible that a consumer can go through the entire sales cycle using only voice searches.

Moreover, the data also shows that more people are choosing voice to engage with companies after the sale as well. 19% reported using voice to provide feedback, and 21% used it to contact customer service.

Finding #3: Security Concerns Could Impact How Much Information Users are Willing to Share

Going back to my Smart House reference, I think it’s important to note the overarching message of the film actually served as a warning for these types of “human” technologies that have too much power.

If you haven’t seen the movie (spoiler alert) Pat, the AI assistant, becomes emotionally attached and too “human-like” and overpowers the family, using its controls to lock them inside the house and prevent them from contacting help.

Since its Disney ,of course, all worked out in the end, but in the real world, this remains a concern for consumers wary of adding one of these devices to their homes.

Microsoft explored this mindset in its study, and found that 41% of users reported concerns around digital assistants and voice-enabled technology.

While the fear isn’t necessarily that their Alexa speaker will hold their family captive, there are still valid hesitations for using a device that has the ability control your household, has your personal information stored on it, and is always listening.

When asked what specific concerns these users had, they reported the following:

As you can see, the majority of concerns center around personal data; specifically, how it’s being used, how secure it is, and how easily it’s collected.

Businesses should be aware of these concerns, as they can potentially impact how many users convert on your offers if they’re conducting research on a smart speaker versus their personal computer. 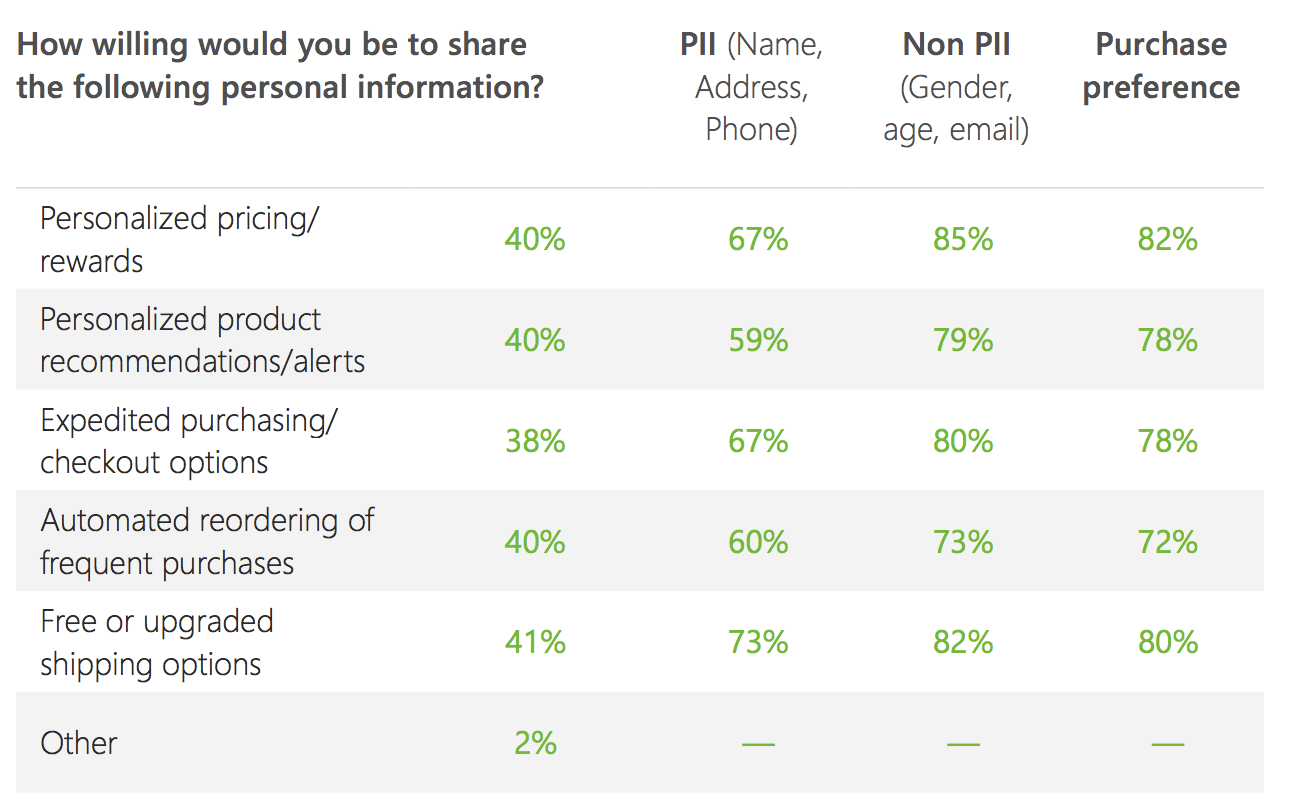 Here, the findings are consistent with existing best-practices for obtaining information from prospects: the level of information they’re giving must be equally valuable with what they’re getting in exchange.

For example, we know that its unlikely someone would be willing to give their phone number in exchange for an eBook, but they would be more inclined to do so if the offer was a free trial for a software.

The same principle applies here; prospects are more willing to give more information in exchange for a higher value offer.

Finding #4: Trends Show Voice-Driven Shopping Will Grow in the Next 5 Years

Voice-driven purchases, now being called vCommerce, is expected to rise at the same rapid pace the eCommerce market did.

“It’s a new mindset that redefines shopping, repurposes the functions of a physical store, minimizes time and stress for consumers and maximizes the importance of personalization and brand loyalty.”

Microsoft’s study showed that the vCommerce market growth has already started, with 62% of respondents reporting they have made a purchase with a voice-controlled device in the past, or they would like to in the future.

Not only are consumers becoming more open to vCommerce now, but they also reported that they expect digital assistants and smart speakers to play an even bigger role in the buying process in the next five years.

These findings indicate that there's an expectation among consumers that these devices will play an even bigger role in the buying process down the line.

Over 90% of consumers believe that in the next five years, digital assistants should be able to do things like find information and make recommendations for products based on personal preferences, help the consumer see them through the purchase, and even help the user engage with their favorite brands.

Since consumer demand often drives growth, these expectations are important for brands to be aware of as develop long-term marketing plans.

Businesses should start paying attention to how web pages perform on voice search and how voice technologies pull their product recommendations now in order to stay ahead of the competition.

Anyone in this industry needs to be comfortable with change.

The rise of voice control and search is simply another shift in consumer behavior - and like other changes, brands need to lean into them rather than away.

Digital assistants are still relatively new, but growing very quickly. Data like this is so valuable for marketers to gain an understanding of how this new technology is currently being used, and more importantly, where it’s going.

As we dive deeper into a voice-centric market, position #1 in search results will be higher-value than ever before - which also means it will be more competitive than it already is.

So, it's encouraged that brands start experimenting with this sooner rather than later. This way, you’ll have a solid strategy to go off of when digital assistants and smart speakers inevitably dominate the market.

If you don’t know where to start, check out some other IMPACT articles on optimizing your content to be voice-search friendly:

"Are Voice Assistants the Next Frontier or the Start of Armageddon?" [Creator's Block, Ep. 110]

How Your Company Can Take Advantage of Voice Assistant Technology

Smart Speaker Usage is on the Rise. What Does That Mean for Your Marketing?