Subscriptions on Medium Are No More: What We've Learned from Medium's Latest Pivot

Chris Faraone, founder of the Boston Institute for Nonprofit Journalism, was not happy with Medium last week, after they rolled out yet another change to how the publishing platform functions and enables their publishing partners.

Those organizations who had their own independent subscription paywalls on a Medium publication they had created -- like BINJ -- were notified on Friday, April 27, they would be canceled on May 7. After that date, readers with subscriptions to those publications would lose them as they came up for renewal.

(Of note, affected publishers were welcome to ask for an extension, if they needed more time to handle the news that they were going to be losing a revenue stream.)

As Faraone was quick to point out, this wasn't a small change, like the sunsetting of a particular feature. Instead, Medium was gutting a critical source of funding.

I was too busy to deal with this yesterday, but am sad and pretty much perplexed to report that @Medium curiously and without notice cancelled all of the @BINJreports memberships (https://t.co/dIVpPhEHsU). This is money we rely on for reporting. #media #journalism

Do I feel like a sucker? Absolutely. Countless people told me not to mess with @Medium. That they would screw @BINJreports in the end. That we were just a disposable Petri dish in their media lab, journalist guinea pigs. But I love the interface and UX. Couldn't help myself.

Why did this happen?

Last year, Medium launched their own membership model -- where readers who want access to quality content (however that may be defined) for $5 per month.

After an initial surge and then a plateau, they were happy to report about a month ago that they were now seeing steady, positive gains.

But that subscription was meant to unlock all content on Medium. It didn't, however, unlock the content for paying Medium members on those 21 publications.

Medium said that created "confusion" for its paying members, and that confusion was the primary driver behind this latest pivot. Additionally, out of their thousands of publications, Medium only had 21 left with paying models.

While 21 publications may seem like a small number -- this most recent cautionary tale from Medium has a few critical digital lessons for us all.

Lest we all forget, we were having this same discussion last year, when Medium blindsided their publishing partners by announcing they would cease native advertising for premium publisher content and the sale of "promoted stories," where a portion of the revenue went to those publishers.

Under the gloss of "renewing Medium's focus," the announcement was made for the first time -- supposedly with no advanced warning for those publishers who would be losing a revenue stream -- in a blog post.

This change also resulted in 50 employees being laid off, as well as offices in New York and Washington, D.C., being closed. (The latter of which was originally opened to position Medium as a highly-desirable publisher of political news and editorials.)

But the sin of Medium isn't that they change. Successful businesses know that growth and change should be part of their DNA.

It's that they do so with little regard for those they hurt in the process.

That may sound sappy, but it's irresponsible to think Medium's reputation wouldn't take a hit after demonstrating, once again, that they're fine with pulling the rug out from under organizations who had come to rely upon their platform financially.

For example, if you think what Medium did last week was a big deal, that was nothing compared to what happened in 2016 -- which is the context of what made the above "renewing Medium's focus" announcement regarding discontinuing native advertising such a blow.

Medium Was Going to Solve the Publishing Problem... Then, They Didn't Want to Anymore

In April 2016, the Medium team was bending over backward to solve what they perceived was the hot problem for publishers back then -- it wasn't easy to be a publisher on the internet.

In now deleted posts, Medium offered up a slick "suite of tools for publishers" and began actively poaching publishers who were established on other sites, like WordPress, to move to Medium. (ThinkProgress is an example.)

Medium wooed them with a sexier platform and editorial autonomy.

Then they sweetened the deal by offering to do all of the migration-related heavy-lifting for them, seemingly for free. (Publishers had to sign NDAs for this kind agreement, so there may have been some fee associated with it, but the appearance is that it was free.)

The Establishment was one such publication.

They took Medium up on the deal.

Then, literally on the day they were making the switch from WordPress to Medium official by pointing their domain toward their new site, the announcement was made that the advertising model that Medium had promised them would make the move totally worth it, was going away. 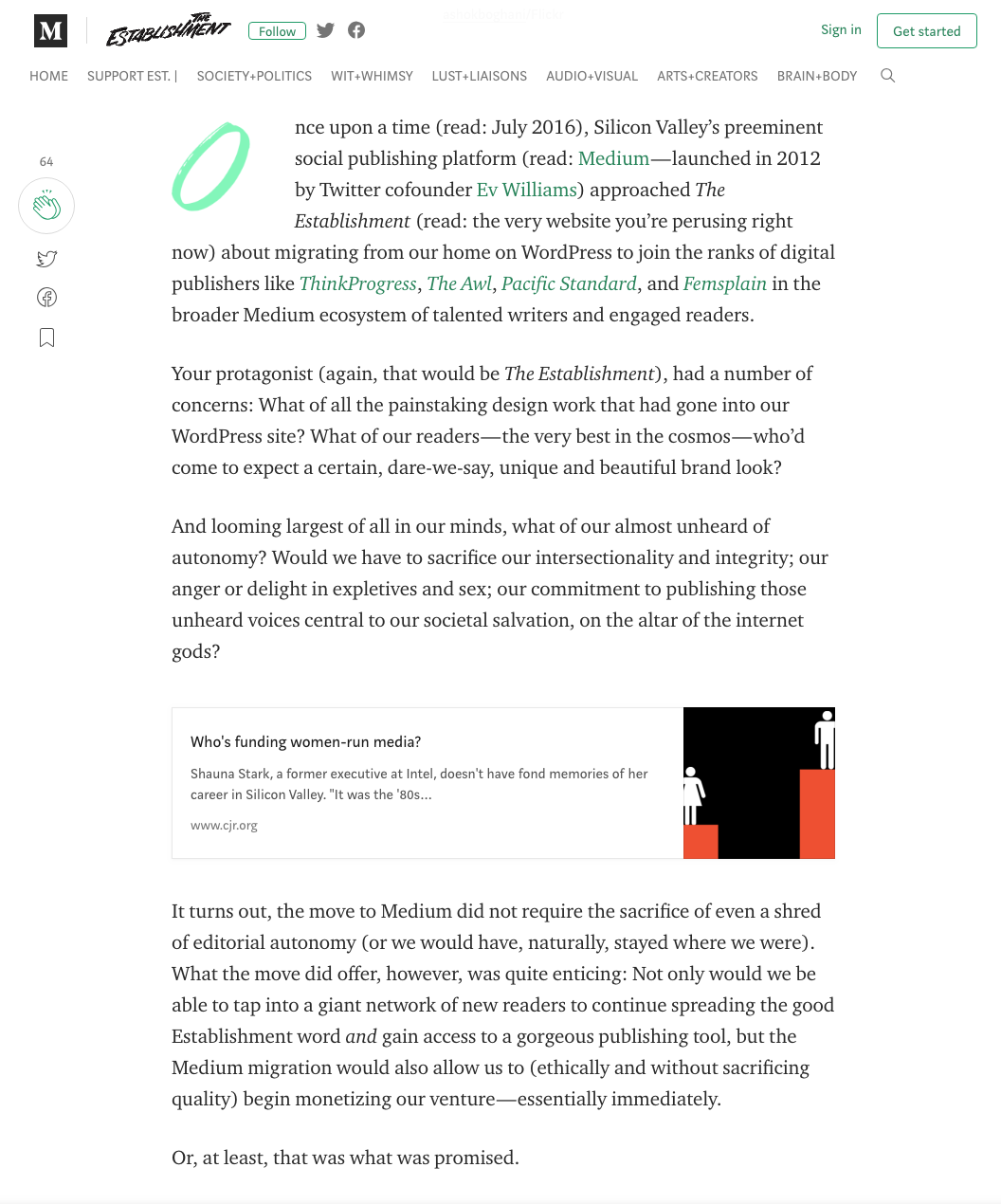 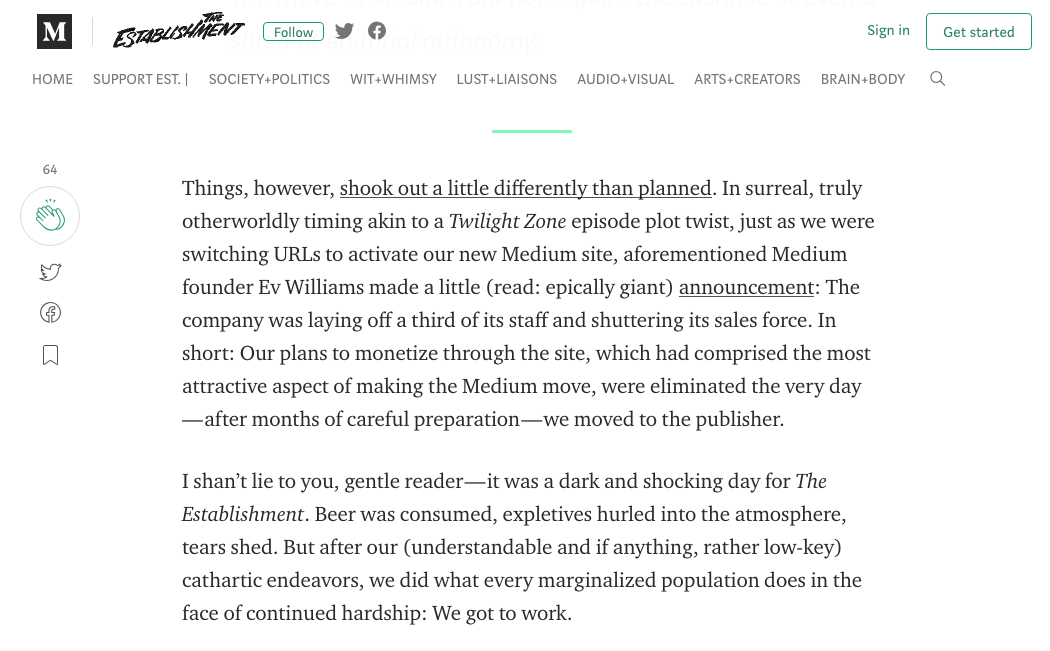 So, Medium's little shift to renew their focus in 2017 basically ended up being a big fat "Just kidding!" to all of the publishers they had seduced with promises of solving their publishing woes the year prior.

Here's the reality: Medium's UX is absolutely stunning to look at and use. But it's clear they don't know what to do with it. (Or they do now, but they broke a lot of eggs to get there? Only time will tell if Medium. 3.0 will stick.)

It was a breath of fresh air for someone like me -- and I'm sure many others -- who were exhausted by cumbersome, distracting, cluttered writing and reading interfaces.

With Medium, the act of writing and reading were enjoyable again. Not only that, you could find some great content on there. It was a place where the written word was celebrated, and that was awesome.

And, for a time, the ability for organizations to stand up a sophisticated publication that brought in money, was just as easy.

For the majority of Medium's users, this may still be the case -- including digital publishers who do not seek to monetize their content.

However, for those organizations who are also fund-seeking digital publishers, regardless as to whether they wish to turn a profit -- remember, BINJ was a nonprofit -- this latest announcement should be the final nail in the coffin of considering Medium as a reliable partner.

Because, while its beautiful interface hasn't totally changed, Medium is still going through an identity crisis driven by the need to be a profitable business -- are they a publisher or a platform... or both? -- and they have been doing so for some time.

We've seen this kind of crisis before with Twitter.

Users love to use Twitter and, as of the 2016 U.S. Presidential Election, Twitter is often where news happens first. So, to many of its users, the value of the platform was clear. But since, historically, Twitter had struggled to turn a profit, its value as a business remained unclear.

It was only in Q4 of 2017 (after 12 years) that Twitter reported a profit. Although, Twitter also didn't grow their user-base at all in that same timeframe, which is a problem by itself.

If It Sounds Too Good to Be True, It Probably Is

While I hope this latest news from the Medium camp finally gets through to those lingering organizations that were still hoping against hope that the platform will turn back to its mission of empowering other publishers who wish to monetize their content the easy way, this shouldn't be a huge surprise either.

Not just because of Medium's history of not playing nicely with others, but also because they need to make money. Their job isn't to make other organizations fat and happy -- Medium needs to eat, too.

Could they have done a way better job of managing how their endless stream of pivots impacted their partners? Absolutely.

They either didn't know how badly their publishers would be impacted, or they didn't care -- and I'm not sure which one is worse.

But wanting to be profitable is not a crime.

Moreover, we've seen this kind of "bait-and-switch" with other social networks and platforms before.

Facebook is another great example, where businesses built out an entire engagement and advertising infrastructure based on a certain set of rules with Facebook pages, only to see organic reach tank or be forced into paying for ads to get any eyes on their content.

Big brands who could still pay to play faced minor inconveniences, but small businesses were really hurt by this overnight change.

So, while we do have the luxury of hindsight in saying this, we should have realized those promises of yesteryear to give digital publishers everything they dreamed -- and Medium would do all the work for them to get them started -- were a little too neat and tidy to have panned out in the long-run.

Alas, this probably won't be the last time we'll buy into the promises that we'll get everything we want as marketers, publishers, etc., from a sleek social platform.

Because, even as Ev Williams and other Silicon Valley philosophers strive to "fix the internet," it would seem the end result is always the same. We'll touch the stove again, swearing this time we won't get burned. But then the gravy train will end, and we'll either need to pay or move elsewhere to get paid for our content.

HubSpot vs WordPress: Which is better for business websites?

As All About Beer & DRAFT Magazines Shut Down, Marketers & Publishers Face a Big Question About Responsibility

Blogging Strategy: When Should You Consider Publishing on Medium?

4 Clever Ways to Produce Less Content, But Get Better Results

Content Distribution: 7 Unique Tactics You May Not Have Thought Of

10 Ways to Repurpose Your Content The Right Way [Infographic]