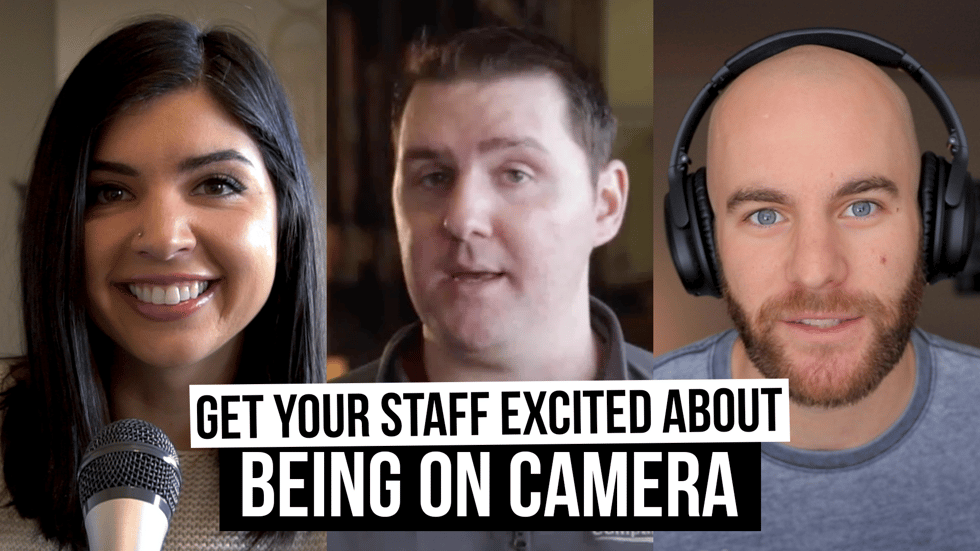 Welcome to episode 30 of the Film School for Marketers podcast, we’re super glad to have you joining us.

Today, we have special guest Devon McCarty,  the Senior Videographer for Mazella Companies, to talk about their journey with insourcing video.

Devon was with the company when they first began their journey with video and has a lot of lessons to share when it comes to insourcing video and getting your team involved in building out not only great video content, but a culture of video as well.

Devon is going to be sharing six lessons he learned.

Listen to the full episode here (or scroll down to watch the video):

About Mazella Companies and Devon’s background

Mazella Companies is a material-handling company based out of Ohio.

They are focused on anything needed to perform work on a job site. They also have a metals division for metal roofing and paneling.

Devon was hired right out of school where he was majoring in broadcast journalism.

They let him know they wanted to begin producing video and educating their industry and wanted Devon to help them figure out how to do it in-house.

Fast-forward three years and they have scaled up to two full-time videographers and one full-time editor.

Whereas before they were outsourcing their video. They’ve since created over 400 videos.

Devon, not coming from a marketing background, had a lot to learn coming on board.

Not only was he tasked with teaching himself, but he had to apply and explain it to other people who had a lack of knowledge when it came to participating in videos.

There were a lot of people who were used to doing things a certain way, and weren’t comfortable changing things up.

Devon had to champion a whole new concept to his team and get them to do something that is extremely intimidating to many people — be on camera.

Devon talks about the first year being very difficult.

There were members of the team who even said to him that the video team wouldn’t be around long-term, that it would be short lived, but here they are three years later.

Devon had to take ownership and not let anyone get in his way. He talks about how if you’re confident you can get other people to follow you.

How did you make video culture stick?

Consistency and sincerity. The beginning of this year, Devon removed himself from being in front of the camera, because ultimately these weren’t his stories.

He wanted to find a way to highlight people who are best at what they do.

While he was workshopping, he discovered there were six things that he could do to really up the quality of video and comfort of every person who go in front of the camera.

1. Pick an expert, not an actor or "whoever's available"

If you aren’t bringing in an expert on the topic at hand, you are devaluing the messaging you’re trying to relay.

When picking an expert, you can take someone who isn’t great at first, but know what they are talking about and make them great.

If you give more people opportunities to dig into what they know, and why they know it, you’ll notice people feel more relaxed. Mainly, because they see that you believe they know the info more than anyone else.

2. Let them practice in advance

Devon relates to what you hearing a newsroom — a ton of mumbling.

Those are the reporters and anchors going over their lines, practicing dictation, and testing read speed.

There’s something to be said if those in the industry give themselves time to practice.

If you can give someone the opportunity to record themselves and practice on their own, they will get more comfortable with how they look and sound.

It also allows them to do as many takes as they want to feel comfortable.

You have to remember, most people don’t know what they look like or sound like on camera and the first time they experience it, it’s jarring.

It’s best to demystify by giving the person an opportunity to do it on their own and practice in advance.

Before they do any shooting, Devon and the subject matter expert have a conversation about what videos have been made in the past and what the process looks like.

The average person doesn’t know what brings it all together in terms of editing and post-production.

When people start filming videos and don’t have that understanding, they think every mistake they make will be seen.

If you can explain the process of things like B-roll, jump cuts, etc. you can help take the pressure off them thinking they have to nail it.

4. Creating an environment where your subject matter experts can succeed

Direct eye contact (or talking head) videos usually come across more sincere than narratives, but most people aren’t used to talking directly into a camera.

In fact, a lot of times it’ll really get in someone's head.

Instead, switch the perspective, move your camera over, and instead have them talk to you.

Switching to an interview style instead will make them feel much more comfortable versus looking into the barrel of a camera lens.

You have to remember you’re asking a lot of people who have no training in this type of field, the least you can do is make them feel as comfortable as possible.

5. Eliminate the element of time

For the person who isn’t used to being on camera, the worst thing you can do is make them feel like they’re wasting your time or their own.

The second they notice you’re looking at your phone or watch, the person will be lost completely.

You need to eliminate the fear that your time or theirs, is being wasted.

Another mistake often made is when the interviewer starts to look down at the next question before the interviewee is done answering.

This is going to make your interviewee think you aren’t interested in what they have to say or you’re rushing through.

It’s okay to have dead space between the end of a response and your next question.

Your subject matter expert will know if you’re just trying to get through a list of questions. This naturally creates discomfort.

You need to be engaged in the conversation and show that you are. If you don’t have an engaging conversation, you can’t have anything of true value to share with anyone.

If your subject matter expert isn’t saying something as clearly as they could, be honest with them that you might ask the question in different ways.

You want to get your subject matter experts comfortable enough to want to come back and record more videos. So, be genuinely interested with what they have to say and fully engage with them.

If you have any questions for Devon or want to connect you can find him on LinkedIn here.

We also would encourage you all to check out their learning channel on YouTube which has world class examples of a company crushing it with getting their team on camera and applying They Ask, You Answer.

How to produce more video with less (Film School for Marketers, Ep. 42)

How to produce high-quality video content at home (Film School for Marketers, Ep. 41)