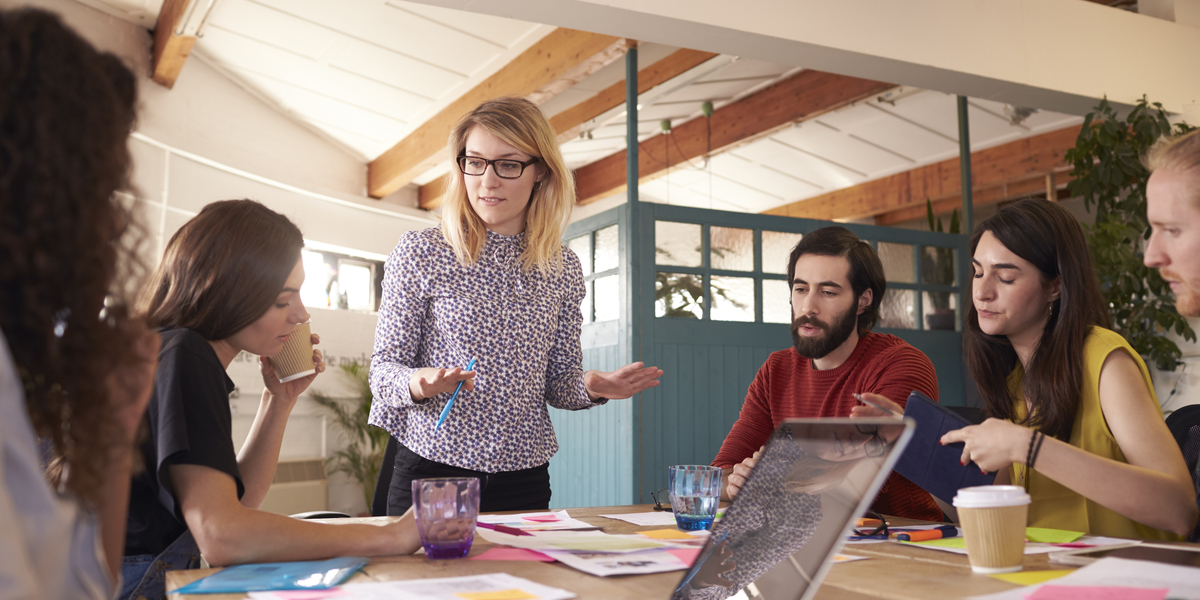 Over the course of 2019, IMPACT's own Brie Rangel invited our audience to join her as she explored different facets of being an organizational leader in radically candid, transparent, and (at times) emotionally vulnerable ways:

But we've now entered a new year. And with that, Brie has entered a new role, transitioning from our VP of services to chief operating officer (COO). So, I sat down with her to discuss what she learned last year as a leader, as well as she's looking forward to, in the year ahead.

What would you say is one of the biggest surprises as a leader in 2019?

Brie: I feel like this sounds selfish, but getting my 360 feedback on my leadership was very surprising to me in 2019. It was sent to approximately 14 people at IMPACT who are either my direct reports or are my peers, so I could get feedback on different areas of performance and how I come across as a leader to other people.

And what surprised me about it was I was terrified — first, of what the answers would say. I was really afraid that people would think that I didn't communicate well or they would zero in on the things I beat myself up about.

I didn't actually get anything like that in the responses. It was overwhelmingly insightful and positive. In fact, the things I'm typically insecure about as far as coming across confident and everything to the team were positive.

They thought, "You're super confident because you're so quiet and reserved and poised," and that they had studied me in meetings so that they can be that way. That was just like, "Are you kidding me? I'm always trying to change stuff about me."

It was a milestone for me to actually accept who I am and my style of leadership.

What do you want to tell Brie from a year ago?

Brie: A year ago, I feel like I was exploring my leadership style because I wasn't as confident in it, but I was starting to see that how I do things is okay and I don't have to be exactly like the prototypical leader. I feel like I'm coming on the other side of that, where I'm finally accepting of my style and embracing it.

I think I needed to go through that journey, though. So, I would probably tell her, "Keep exploring and know you can accept the way you are and still be a good leader."

What would you say has facilitated some of your growth as a leader this year outside of the feedback you've received?

Brie: So, the first comes to my mind is the amount of attention that we've placed organizationally on inward growth. I have a coach, Chris, who I meet with weekly. That way I'm always held accountable to things that I'm working with him on.

Also meeting with him just forces me to constantly be thinking about this stuff instead of just going with the flow and forgetting that I should always seek to self-improve in some way.

What were the most difficult moments or challenges you faced in 2019?

Brie: Well, I started the year thinking I was out of a job. But I just didn't quite know where I fit at IMPACT anymore. So, if you had told me where I'd be sitting at the end of this year, this is not where I thought ... I thought it'd be sitting in a different company.

I decided just to pick myself up by my own bootstraps and figure out, "How do I fit in this company, if I even do? And if not, what are my strengths so I know where to go next?" And so Q1 was really all about that for me, and uncovering my strengths and how to apply them best at IMPACT.

So, the way it started off, the year was challenging and that I felt very useless and I didn't achieve what I'd hope to achieve at IMPACT. It made me question what I'm even good at. It was pretty earth-shattering, internally. But I asked myself, "Do I just wallow and be sad about it and continue to underperform or do I do something about it?"

I decided to do something about it.

The second challenge I faced that sticks out was another restructure that happened mid-year with our teams where we had already gone through three of these or so in the past year-and-a-half since I had been in my previous position as our VP of services.

Unlike previous times, I approached it differently, to make sure that didn't happen. So, along with Bob, I met with everyone who would have been impacted and talked with them, got their feedback, changed things, and actually had them help build the structure better this time.

This wasn't about vanity or seeking validation regarding a particular course of action. We went into it with the mindset of making our entire company a part of the transformation; equal owners in shaping what our future would look like.

As a result, our people felt heard.

What are you most looking forward to as a leader this year?

Brie: With IMPACT growing and our plans for this year now currently underway, my role and responsibilities are growing as well; especially as I move into the role of us being our COO. And so that has added challenges to my plate that I didn't anticipate because I didn't see this coming, necessarily, in the timeline that came, of areas that I need to beef up in.

I have been a services-focused contributor and leader forever. And now that we're doing more things that aren't traditional services, like Digital Sales & Marketing World and other areas I don't have a lot of experience in.

I can talk customer experience all day long and traditional services. That's old hat. But now, as IMPACT ventures into new areas, so am I. So, I need to get smarter. That's what I feel like.

How does that make you feel?

What is the biggest lesson you're carrying with you from 2019 into this year, as you embark on your new leadership journey?

Brie: Be ready for anything, because life rarely goes as planned. That's why I don't make five-year plans. I just absorb things and tuck it away. So, I'm ready for anything and have that little nugget of education.

I'm being proactive with my own growth, but flexible enough to know I don't exactly know where I'm going in life. I don't know where the company is going to be in 10 years because the industry changes way too fast.

But that's OK. I'm ready for anything.