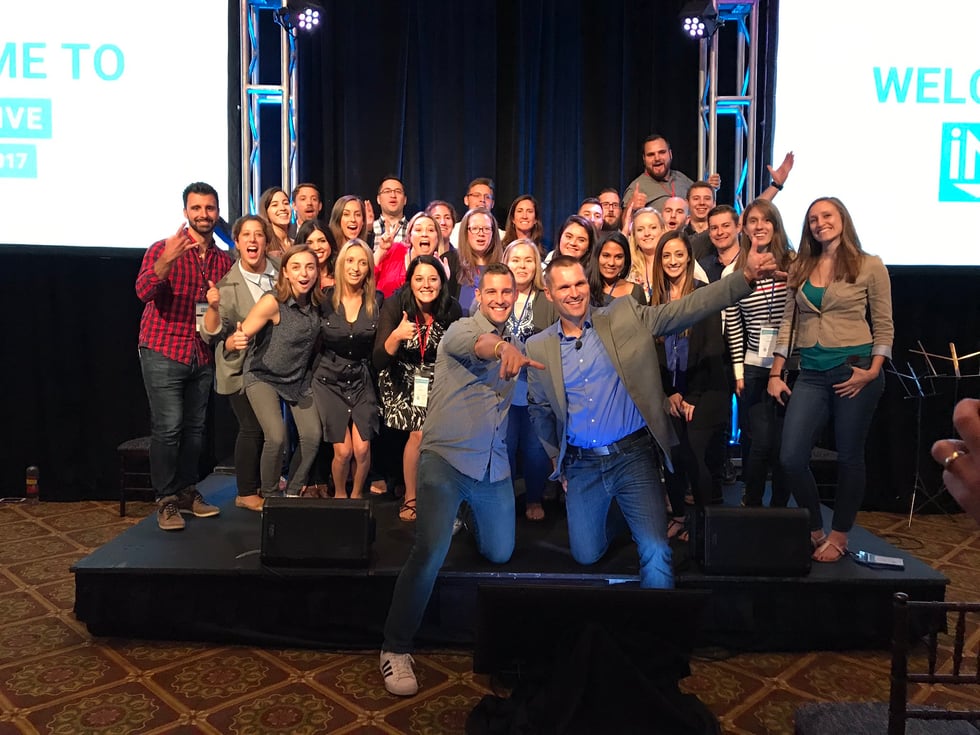 And just like that, IMPACT Live has come and gone!

Yesterday was the second and final day of IMPACT Live 2017 and it was just as memorable as the first. (When, if you recall, we announced IMPACT Live 2018 will have a free option. No big deal.)

While the educational and inspirational talks continued with IMPACT’s Kathleen Booth, Nick Salvatoriello, and Natalie Davis, as well as Tony Uphoff, Dee Dee DeKenessey, Paul Roetzer, Jeff Julian, Jason Campbell, and of course, Marcus Sheridan, we shook the day up by announcing the winners of our first-ever IMPACT Awards.

Similar to how HubSpot honors Partner client work with its quarterly and annual awards, IMPACT wanted to give marketing and sales leaders from all industries an opportunity to showcase and be recognized for their campaigns.

Upon registration, attendees were given the opportunity to submit work to be considered in three categories: Video Marketing, Sales Transformation, Website User Experience, and Content Marketing.

Based off of their goals and performance, we selected our winners, then in an Oscar-inspired segment, invited them on stage to receive some snazzy trophies.

Unannounced, we also awarded a special, “Social Butterfly” award to the attendee who demonstrated the most engaging social media activity during the event (and frankly, pretty much always), Stephanie Casstevens from Label Insights.

Congrats to the winners of our first ever IMPACT Awards! one Digital, Industrial Packaging, PeopleDoc, Aptify, and Stephanie Casstevens! #IMLive17

Like day 1, It would be impossible to capture all of the action of day 2 here, so instead here’s a peek at the day’s events through the attendees' eyes:

Our #marketing team is ready for Day 2 of #IMLive17 !! #CompassApts pic.twitter.com/vjCYRZZq8Q

Off to a great start with @WorkMommyWork. Content works, but you have to put the work in. #IMLive17 pic.twitter.com/HDHx5Tace1

Getting an awesome mini-concert from acapella group #ConneCT before the next session starts. It's placemaking, conference-style. #IMLive17 pic.twitter.com/bQTQCmjmwo

Things that either stop people from making video, or issues once they're made. #IMLive17 pic.twitter.com/c1iL82M30V

Every video should start with a goal @deedeedkc @wistia #IMLive17 #VideoMarketing pic.twitter.com/iKlt91z7Fd

THIS guy is getting ready to go on! #IMlive17 @paulroetzer pic.twitter.com/KbNXibxYJZ

"AI frees humans up to do the things humans are uniquely capable of doing." @paulroetzer #IMLIVE17 pic.twitter.com/j45gcZLTtb

"This concept if editorial calendars has hurt me for so long. Planning is good but not like this." Yes! #IMLIVE17 https://t.co/Yu8ovIUdco pic.twitter.com/y3KwiTMBN5

Breakout session in the street! Love it. #IMlive17 pic.twitter.com/bkmqppeeiw

Listen and take action. What does your business stand for? - @jascampbell17 #IMLive17 pic.twitter.com/lJpz8P9E6u

I'm a time traveler from the future and want to say that #IMLive18 is awesome, and @MarcusSheridan is back! 😄 #IMLive17 pic.twitter.com/Sz9krogVoD

The bad news is IMPACT 2017 is over, but the good news is it left us with some amazing memories and new friends -- and of course, tickets to IMPACT Live 2018 are already on sale!

As mentioned yesterday, everyone will be able to enjoy the value of IMPACT Live 2018 for free, but those who upgrade to VIP will enjoy some additional perks to get even more out of the experience.

In addition to admission to both days of the event and all-day coffee (available to every attendee), VIPs will get:

150 VIP spots are available for just $399 (20 of which have already been scooped up), but VIP or free, space will be limited, so don’t wait to get your tickets.

Believe me; You'll want to be there. Amazing things happen.

Your company’s live event just got cancelled; Should you host a virtual one?

Without COVID-19 vaccine, most marketers won't attend in-person conferences in 2020 (I doubt they're alone)

What I learned hosting a virtual marketing event for 3,000 people

10 best marketing events to look forward to in 2020

By Stephanie Baiocchi on August 9th, 2018

By Stephanie Baiocchi on August 9th, 2018