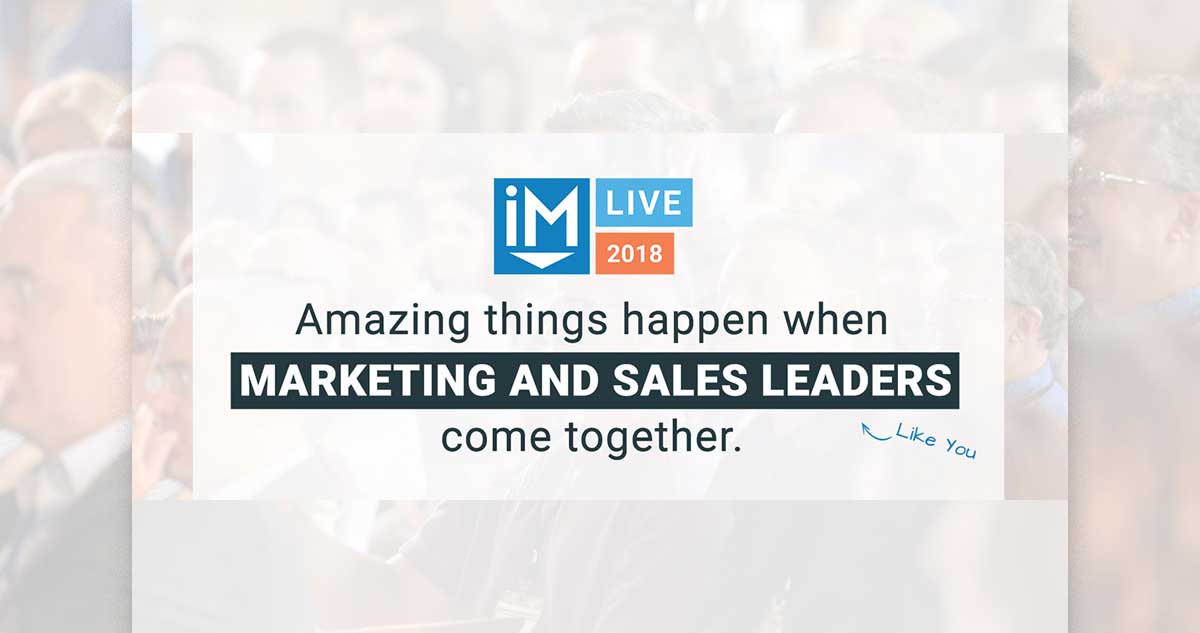 If you weren’t in the room or watching on Facebook this afternoon, the first day of IMPACT Live was certainly one worth talking about.

To kick-off the SNL-themed event, attendees (marketing and sales leaders from across the country) were surprised with an original “cold-open” skit filmed on-location at our venue and starring several members of the IMPACT team.

While there was a great deal of excitement to be had all day, the biggest highlight had to be the announcement of IMPACT Live 2018.

IMPACT Live 2018 Free For All to Attend

Taking place at Infinity Hall in Hartford on August 6th and 7th, 2018, IMPACT Live 2018 will welcome back Marcus Sheridan as well keynote speakers:

That’s right; both days of the event will be free for marketing and sales leaders like you to enjoy, no ifs or buts.

Free? Are You Crazy?

Perhaps -- but there’s a method to our madness.

When it came to IMPACT Live 2017, we wanted to create an intimate, exclusive event for marketing and sales professionals to unite, bond over common pain points, learn the skills needed to over and grow, and have a damn good time, which we did.

What we learned quickly, however, was the price point became a barrier for many in small and medium-sized organizations. So, we knocked it down.

At IMPACT, helpfulness is a core value. We want to help our readers, clients, and prospects grow their businesses as much as possible, not bar them with an unrealistic price tag.

Budget is a concern for everyone (including us) so next year, we’re eliminating it to help make sure you’re here!

… But VIPs Will Get Some Amazing Perks

Following a freemium model, everyone will be able to enjoy the value of IMPACT Live 2018 for free, but those who upgrade to VIP will enjoy some additional perks to get even more out of the experience.

In addition to admission to both days of the event and all-day coffee (available to every attendee), VIPs will also get:

150 VIP spots are available for just $399, but VIP or free, space is limited, so don’t wait to get your tickets.

Aside from the exciting 2018 announcement, attendees enjoyed:

It would be impossible to capture the action here, so instead, here’s a peek at the day’s events through the attendees' eyes:

On a plane soon then #imlive17 so excited I couldn't sleep last night! @Impactbnd

Beyond jazzed for #IMLive17 today and tomorrow — starting off the event right with a #glutenfree breakfast. Thanks, @Impactbnd team! 😍 pic.twitter.com/n5neadZPI3

The countdown is on! #IMlive17 pic.twitter.com/GBzwkhKy4k

Take away #onething. write it down. Go home. And do it! #IMLIVE17 pic.twitter.com/1zlAIIhKez

So great to be with the best marketers on the planet at #IMLive17 @Impactbnd @TheSalesLion pic.twitter.com/6VgHOoyMMJ

#IMLive17 "Learn how to sell. It gives you control." @tiffanysauder pic.twitter.com/oNIf8EIKvM

Our CEO @pc4media was live today at #IMLive17 talking about the future of #inboundmarketing Image cred: @Impactbnd pic.twitter.com/wQnHs2514C

A great way to pick up the energy at #IMLive17 @GeorgeBThomas #video pic.twitter.com/MFOMe8mD2u


It's the clever @markroberge sharing how to optimize the sales process at #IMLive17 pic.twitter.com/kceYI5pRcg

10 best marketing events to look forward to in 2020