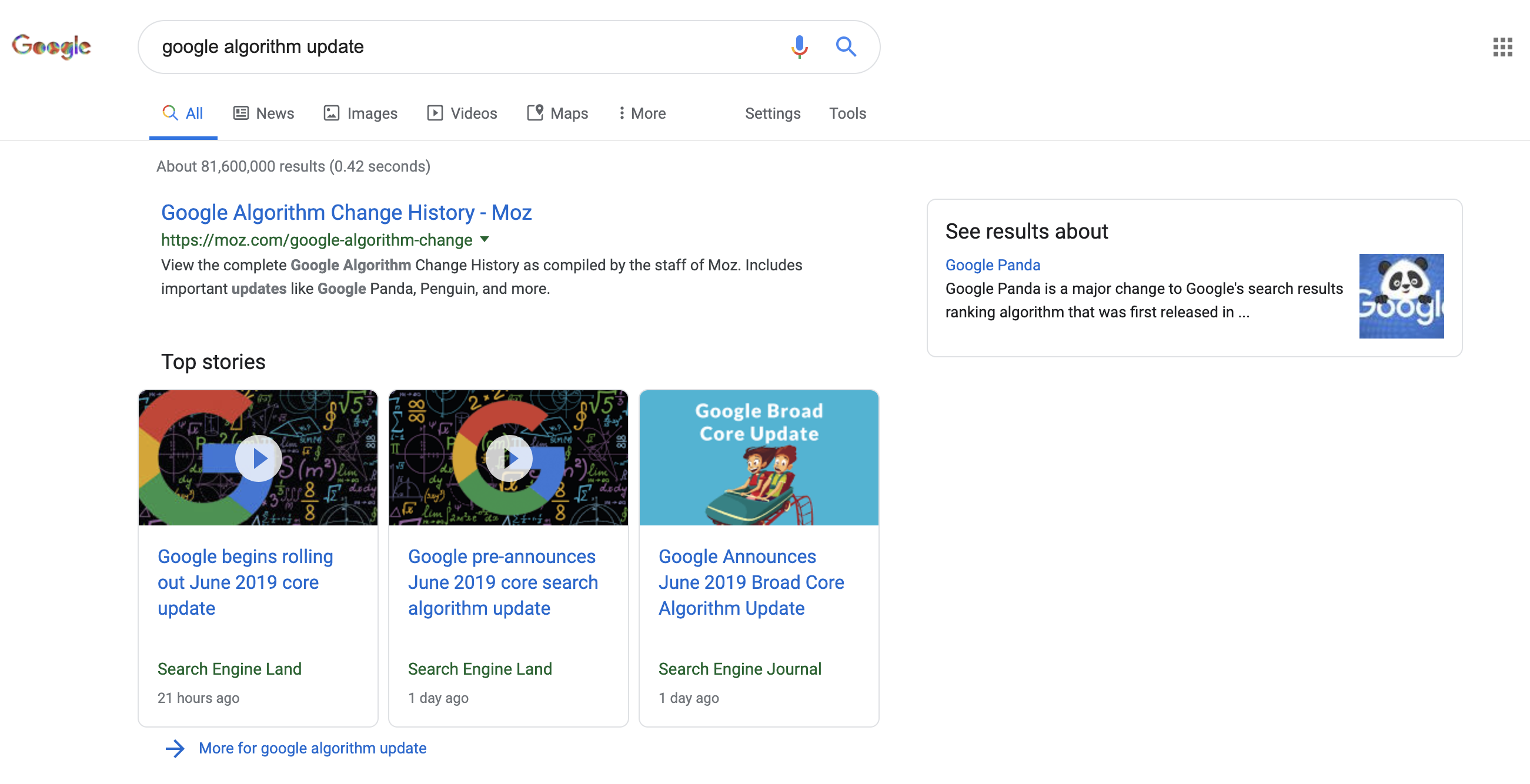 Ahh, the elusive Google algorithm — the one thing that has kept marketers on their toes (and, probably, employed) for years.

Typically, we never know when a new algorithm is going to hit, but Google announced via Twitter on Sunday that we could expect a new broad core search update to begin rolling out on June 3rd.

Tomorrow, we are releasing a broad core algorithm update, as we do several times per year. It is called the June 2019 Core Update. Our guidance about such updates remains as we’ve covered before. Please see this tweet for more about that:https://t.co/tmfQkhdjPL

Cue all SEO experts and marketers shaking in their seats.

Now that the update has begun, what does it entail, how will it affect your site, and what next steps should you take?

We’re going to break it down to the best of our ability.

What Does the June 2019 Core Update Entail?

This is always my favorite — and least favorite — question: what are the details behind a Google algorithm update? I have a love/hate relationship with that question because even though it’s exciting to learn what my SEO efforts need to focus on, I know I need to brace myself for the “we don’t know yet” answer.

However, with this update, Danny Sullivan — who operates Google Search Liaison — tweeted “Our guidance about such updates remains as we’ve covered before. Please see this tweet for more about that:”

Here’s an update about updates -- updates to our search algorithms. As explained before, each day, Google usually releases one or more changes designed to improve our results. Most have little noticeable change but help us continue to incrementally improve search….

In the thread, you’ll see that they note “Sometimes, we make broad changes to our core algorithm. We inform about those because the actionable advice is that there is nothing in particular to “fix,” and we don’t want content owners to mistakenly try to change things that aren’t issues.”

How Will the June 2019 Core Update Affect My Site?

Considering this is a broad core update, there is no evidence that shows your website and content will be dramatically affected.

In fact, you may not even be aware that Google makes core algorithm updates every couple months.

Sullivan noted there was “Nothing special or particular ‘big’" about this update.

“It's the usual type of core updates that we regularly do. We just wanted to be more proactive. Rather than people scratching their heads after-the-fact and asking "hmm?," we thought it would be good to just let folks know before it rolled out.”

As with any update, though, you may see some drops or gains in your website performance.

Only time will tell if specific industries will be impacted, like last year’s Google Medic update. Similarly to yesterday’s update, Google announced a routine core algorithm update in August 2018 and noted that there was nothing users could do to “fix” their site.

After the update, Search Engine Round Table conducted a survey on how this update impacted users’ websites.

It turned out that 42% of the 300 who submitted the survey who were in the "medical, health, fitness, healthy lifestyle space" had some sort of impact — hence the update being dubbed “Medic.”

What SEO Efforts Should I Focus On?

All too often people are looking for a quick fix with SEO. Though some instances — like improving your site speed — can yield an immediate positive outcome, most of your SEO efforts will remain a long-term play.

In previous updates, Sullivan noted: “There’s no ‘fix’ for pages that may perform less well other than to remain focused on building great content.”

Content should continue to be your main focus when looking to improve your pages’ search rankings. Are you thoroughly answering your prospects and customers’ top questions? If not, it’s time you start.

Though this is just another routine core algorithm update and its effect on your site should be minimal, it’s always important to continue to place emphasis and attention on the one element Google has continuously heralded as having the biggest impact on your site's performance: content.

Will Google Collections be able to compete against Pinterest?