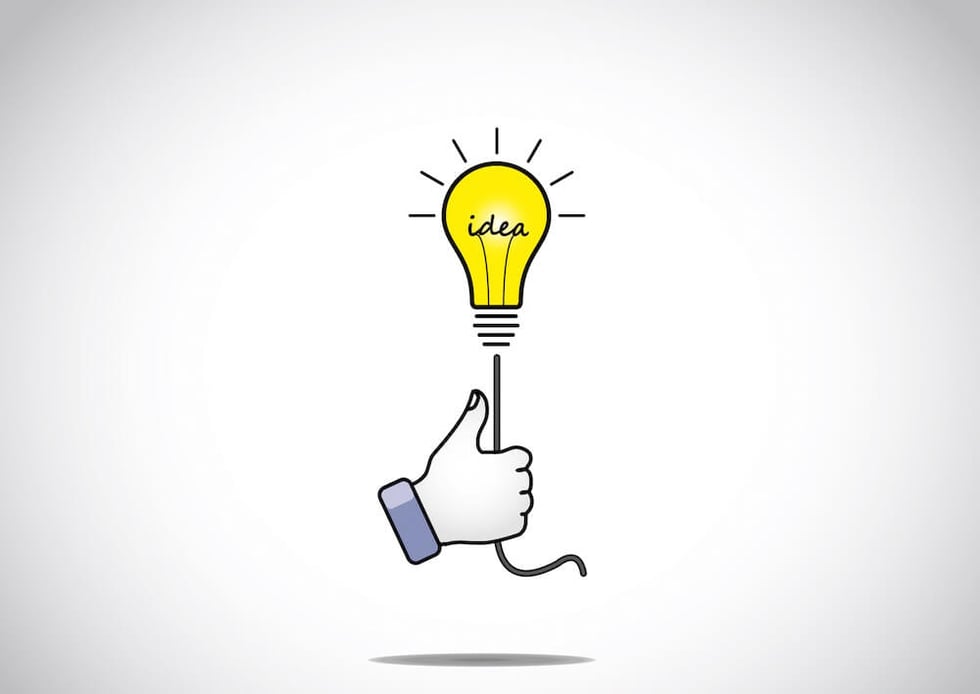 When you see the micro-content that Taco Bell and Oreo, amongst others, are putting out you may be quick to say "Psh... I can do that," but social domination is harder than it appears.

To truly capitalize on the power of social media, you need to establish a lively presence.

You need to create original, dedicated content and campaigns; Campaigns that fit perfectly with how users are already using the platform, spark conversation, and encourage sharing. Not as easy anymore, right?

Well, never fear! The best way to get started is to learn from the best.

Below are 20 clever Facebook campaigns even I wish I can up with first.

In case you're the only person in the world who isn't familiar with this campaign, The ALS Association raised awareness for the disease by creating a social competition where people posted videos of themselves dumping ice water over their heads and challenging their friends and family to do the same.

The results from this campaign are truly incredible. Here are a few stats from Facebook themselves:

All of this was accomplished with a total Marketing budget of $0.

We always want what we can't have.

Rather than trying to gain as many likes as possible, Grey Poupon was focused on the quality of likes. Facebook users had to apply to like their page and their worthiness was assessed by a "refinement score."

Those who did not meet the high standards had their like removed and were told to improve their profile before applying again. It was aspirational and challenging.

Of course, in the end, this was all in good fun and played off of the sophisticated reputation that Grey Poupon created decades ago.

The campaign led to a 3,000% increase in likes and gained national media coverage.

In this example, the Marketing team behind the hit TV show, Breaking Bad showed us how to increase audience engagement, encourage shares, and "delight" while immersing themselves in the brand.

In the show's final season, Breaking Bad created a Facebook app that created personalized graphics where fans' names were written using the icons of chemical elements (just like the show's logo.)

The app was a huge success -- earning over 4.1 million impressions and creating names for over 800,000 people.

OAK Milk is a brand from the food and beverage manufacturer, Parmalat, popular in parts of Australia.

In order to increase brand awareness and to get their product stocked in more stores, OAK invited their Facebook fans to request a "Reverse Robbery" at their local stores that didn't carry the brand, where men in masks would show up and stock the store with OAK milk.

"There's only one cure for a store that doesn't stock OAK and that's a Reverse Robbery. -- Oak Milk

OAK even started performing Reverse Robberies in the homes of their Facebook fans.

The campaign resulted in a 50% increase in fans, over 3,000 Reverse Robbery requests, and 60 new locations that stocked OAK products.

How does an airline get people engaged in tracking flights without doing any traveling themselves?

If you're LOT Polish Airlines, you add mistletoe to your planes and encourage people to kiss when they fly overhead.

They used Facebook ads to target people in different cities when planes were en route and invited people to track the flight to time their kiss.

Through likes, shares, and blog posts they gained over $300,000 of free media exposure.

We're starting to see more and more big brands bring social media to "real life" by creating viral stunts like this one.

Pepsi created a vending machine that gives away a free can of Pepsi in return for a "like" on their fan page. You could either sync your phone with the machine or log in to Facebook on the touchscreen of the machine if you didn't have a smartphone.

While this isn't necessarily a cost-effective strategy, they were able to track exactly who received the free samples, as opposed to handing them out at random.

A great way to gain exposure is to engage people in real-time.

Playland at the PNE accomplished this by giving 8 teenagers free passes to their park. The only catch was that Facebook fans could watch from home and vote on what the teenagers in the "hot seat" had to do; which rides they had to ride, food items they had to eat, and what games they played. No surprise, over half of the contestants puked, but that's beside the point.

Over the course of four days, the campaign resulted in over 560,000 impressions, over 28,000 engaged teenagers, and over 5,000 Facebook stories.

We're all pretty familiar with this tasty campaign.

Lay's has successfully used Facebook in the past (and still does it today) to crowdsource new flavors for their potato chips by allowing fans to submit and vote on their new flavor.

Not only did the winner get to pick the name and ingredients of a new Lay's flavor, they also got to walk away with $1 million in cash. (And people nationwide got to enjoy Mango Salsa, Bacon Mac & Cheese, and Sriracha flavored chips. Yum.)

Hershey's uses their Facebook fan page to highlight user-submitted recipes around holidays and events -- which they have dubbed "Happy Chocolate Moments."

This works well because it gives their customers new ideas for how to use their product, creates a more personal relationship with fans by sharing their recipes, and gives users their 15 minutes of fame. 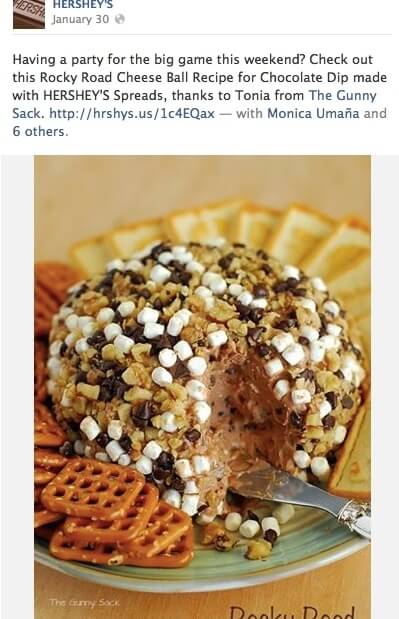 10. No One Deserves to Die (Lung Cancer Alliance)

People were understandably outraged and ripped the posters apart.

When anyone did a search online for who was behind this, they were directed to a teaser landing page with a countdown.

The Lung Cancer Alliance then launched a digital campaign that spread facts about lung cancer, which included an app that integrated with user's Facebook profiles to bring these statistics to life with random friends from their real profile.

This allowed the Lung Cancer Alliance to make an emotional connection with their audience and encourage more conversation. 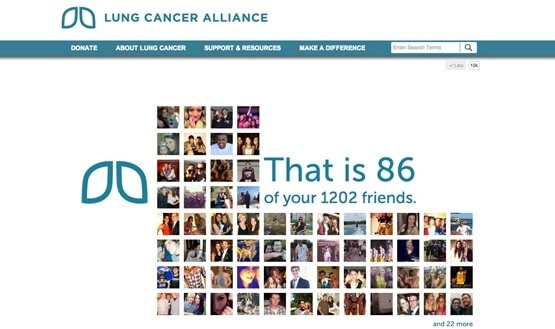 Under Armour started as a company that specialized in sweat-wicking clothing and has grown into a major retailer in the sports apparel industry.

In order to increase their appeal among women, Under Armour launched a Facebook campaign Misty Copeland, the ballerina, and Gisele Bundchen.

The videos they launched exclusively featuring women were a hit and led to 28% increase in sales among women.

In addition, Under Armour received $35 million in free media and a 42% increase in traffic to their website.

Allstate has created a mascot that's bigger than their brand.

The character "Mayhem" was first introduced on television commercials, but then Allstate created a separate Facebook fan page for their mascot and he quickly earned exponentially more likes than their original page. (Mayhem is currently sitting above 1.8 million for those who are counting.)

Engagement is king on social media and when a simple post such as “I’m a bee and I have no idea why I’m in your car, but I am VERY angry about it” gets 30,000 likes, you've got an engaged audience on your hands.

13. A Fantasy of Flowers (MAC Cosmetics)

MAC Cosmetics invited fans to take part in an interactive image experience by uploading photos of themselves inspired by their campaign to a gallery with photos from other MAC fans.

The campaign generated a ton of user-generated content and shares from their fans, plus MAC improved their community online by showing appreciation to their loyal customers. 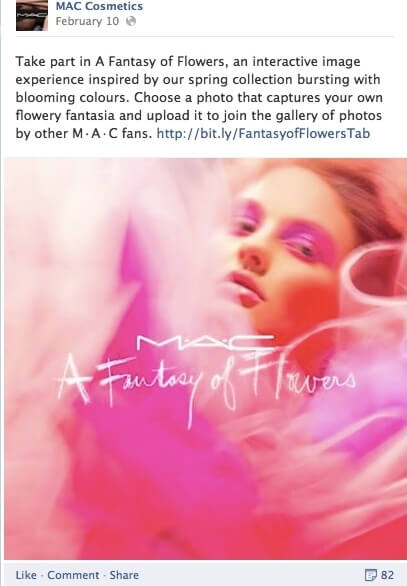 Help Remedies created a very clever campaign to engage people by scanning the posts of your friends online.

They launched a Facebook app that would detect posts from your friends that included words such as "sneeze" or "cough" and flag those users.

Using an algorithm they were able to determine who was most likely to have gotten you sick based on your interactions with those people.

It also allowed you to send those people a friendly message blaming them for you being sick, while also offering a bit of help in the form of a coupon.

In order to raise awareness about their new line of A1 sauces, Kraft created a video that showed A1 changing their relationship status on Facebook with steak to "it's complicated."

Kraft was tired of people only associating their sauce with steak and chose Facebook as their primary medium to spread this message.

The campaign worked and their video received over 1.3 million views, 3,000 likes and 200 comments.

The Brazilian clothing retailer C&A integrated Facebook with the shopping experience to help women make up their minds about what to purchase.

The retailer posted pictures of items from their new collection online and encouraged people to vote for their favorites by liking the photo. Those likes were then displayed on the hangers of the associated clothing items in the physical store, in real-time. That way women knew which items were most popular when they were shopping.

During the campaign, C&A was gathering over 1,000 likes per hour and sold out part of their new collection in one day.

A great way to engage fans is with questions and high-quality photos.

Zillow uses their Facebook fan page (with 1.4 million fans) to gather insights and preferences from their audience by asking open-ended and multiple-choice questions.

Even people who aren't in the market for a new home love to fantasize about their dream home, which is why the engagement on Zillow's page is so high. 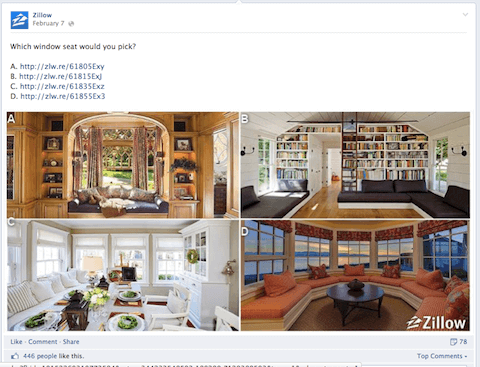 Imagine being able to use social media to buy your friend a cold one.

That's exactly what Budweiser accomplished with this campaign.

They used Facebook ads to target people with friends in Denver and Chicago, allowing them to send their friend a redeemable receipt to use at a local bar.

The campaign resulted in 23 million media impressions and a threefold in-bar sales boost from consumers who spent more than the value of the first beer when redeeming their coupon. 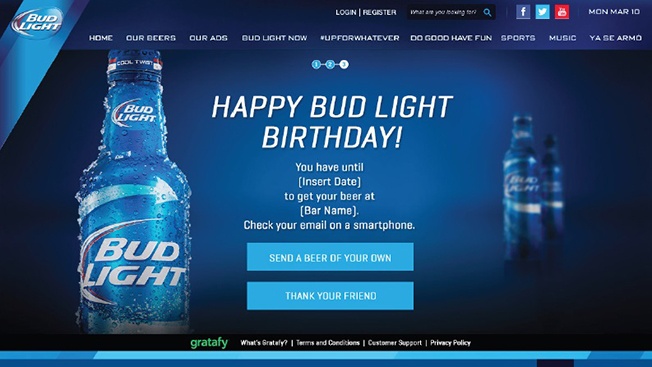 Johnnie Walker did something very interesting when they targeted Facebook users in Lebanon and they encouraged them to post hopeful messages online, as opposed to the pessimistic messages that were more common.

They used the hashtag #KeepWalkingLebanon to track the posts and later created a video featuring a fire-writing calligrapher who recreated the messages.

Technically this isn't a campaign, but more of an event. When Cadbury's Facebook fan page hit 1 million likes, they decided to celebrate by constructing a giant Facebook thumb out of their famous Dairy Milk bars. The image went viral and they quickly gained another 40,000 likes to their page. On top of that, they hosted a real-time live stream that documented the entire process and the video was watched by over 350,000 of their fans. 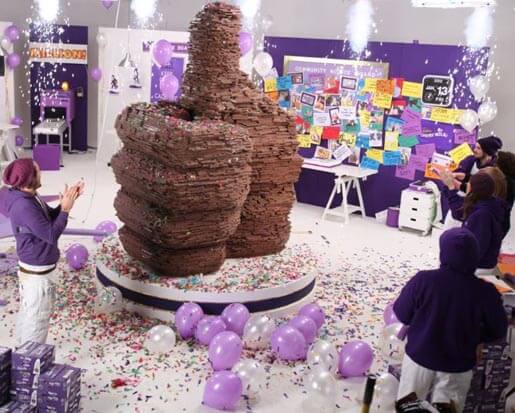