How Much Should You Be Spending on Facebook Ads? (Price Ranges, Cost Considerations, Etc.) 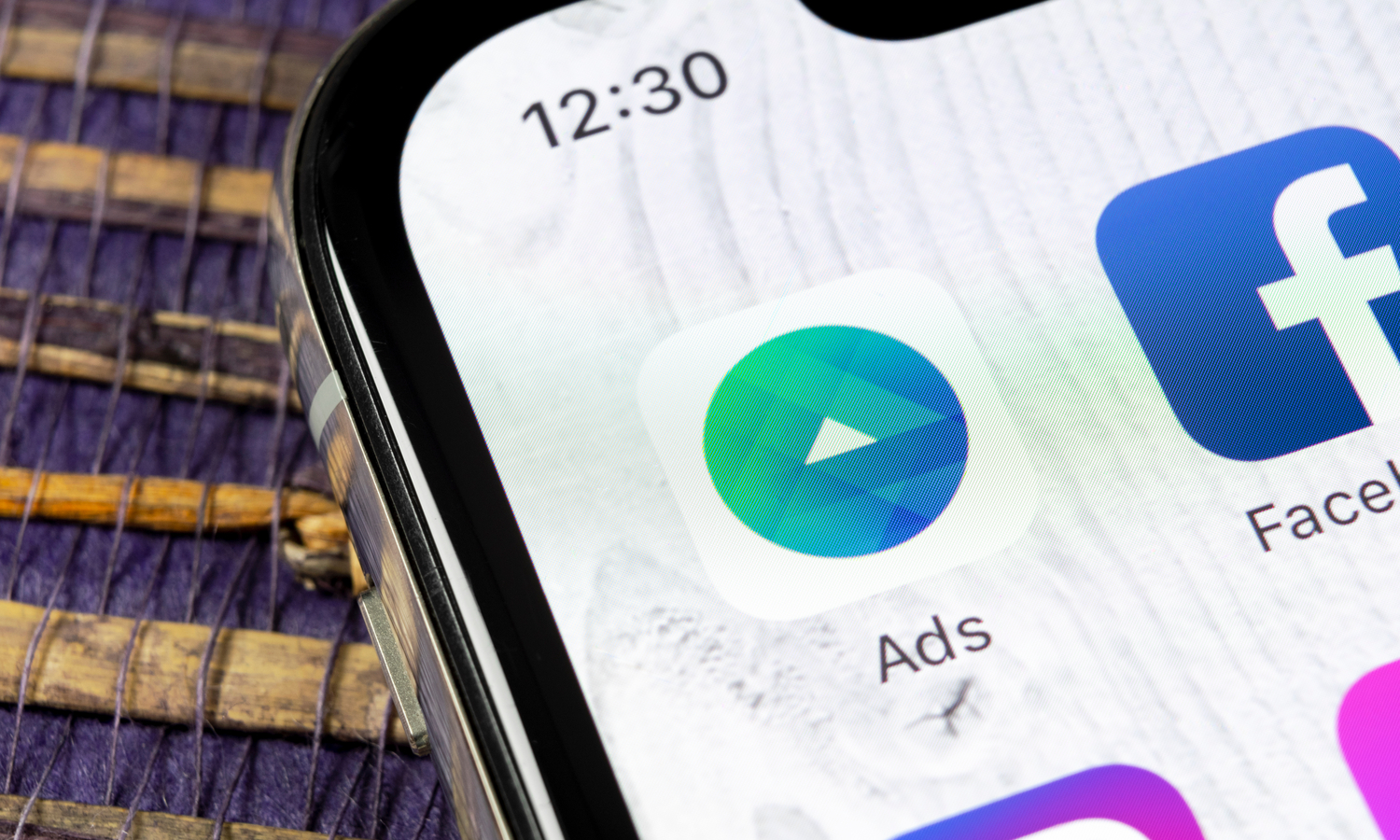 You whisper promises of insane ROI and waterfalls of revenue in our ear, but you so easily become a scene straight out of Money Pit.

If you're too young to understand this reference, this is your cue to laugh and play along, so I can continue to ignore the gray hairs that are rapidly multiplying on the top of my head.

Anyway, given that I know absolutely nothing about how to avoid frittering away hundreds -- if not thousands -- of dollars on Facebook advertising, I decided to turn to our resident Facebook genius, Ali Parmelee.

Given our last tango on 2019 Facebook advertising strategy essentials, it should come as no surprise that Ali has the full scoop on how much you should be spending on Facebook ads to see the results you're looking for...

...and how to avoid the social advertising equivalent of setting your money on fire.

Q: So, how often do you encounter businesses that are frustrated with the show-stopping results they're not seeing with Facebook ads?

Ali: Oh, a lot, haha. We get lots of questions from people who are seeing lackluster results. For example, recently, a new client came to us and she felt like she was giving the previous agency all the ideas and there wasn't really a lot of strategy behind what they were doing.

So, she wasn't sure that the money she was spending was actually being spent properly or most effectively because she felt like she hired them to do this and lead them -- but she ended up doing a lot of the leading.

Ultimately, she didn't know if what she was spending was appropriate, if it was right. They weren't necessarily doing ad spend forecasting for her to help her plan.

Ali: Well, in the case of this client, their agency wasn't looking at what the cost per acquisition was for each step of the funnel.

More broadly speaking, the biggest problem with Facebook ad spending is that it's kind of the wild west still.

It's not like in the 80s, with well-established media agencies that have been doing this for years, and years, and years. Facebook advertising is still relatively new, and there are so many people who say that they know what they're doing -- that they're experts.

But they don't, and they're not.

And even many of those agencies that know how to bring in some amount of profit don't always have a high enough level of knowledge to really maximize the spend every campaign.

Q: So, what's the disconnect? What are people -- and marketing agencies -- getting wrong about Facebook ad spending?

Instead, someone will ask me how much they should spend without giving me any details. I can't answer that, because I'm essentially flying blind.

There are a handful of questions I need to have answered first -- the variables that dictate how much a Facebook ad campaign will cost -- before I can give out a number:

It's all about metrics. 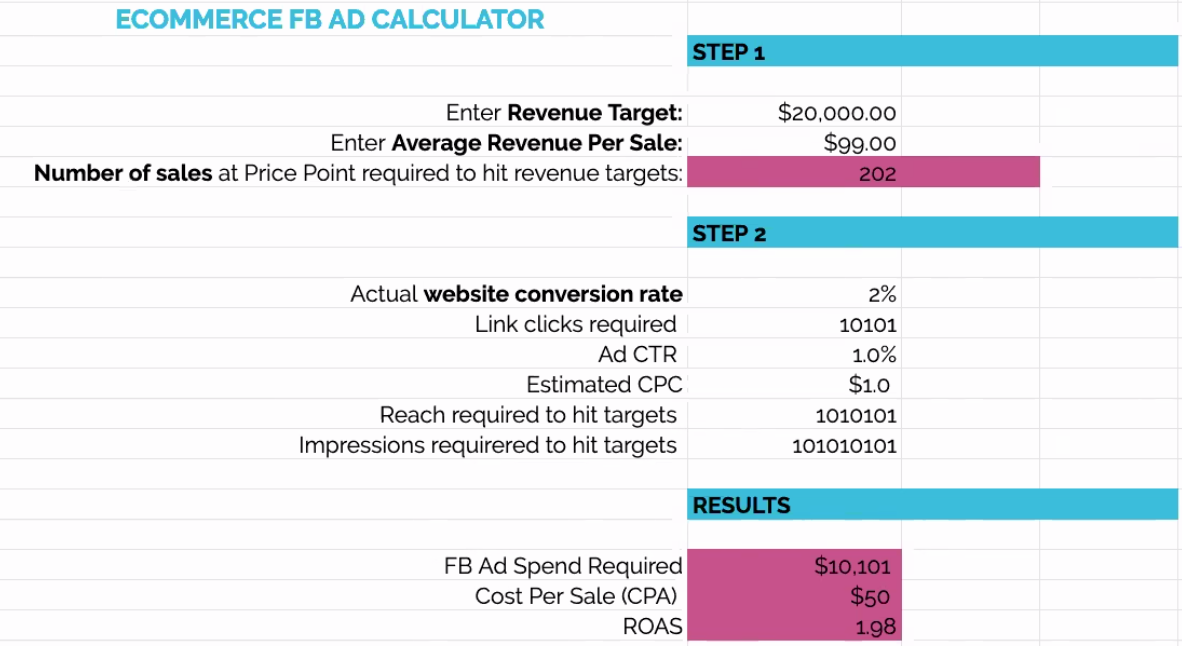 Sample data run through Ali's magical Facebook ad spend calculator, which is built on the variables described above.

Q: How does a calculator help you manage conversations around Facebook ad spending?

Ali: This is what I love about this calculator -- it becomes an unemotional conversation.

With this calculator, I can say, "OK, but let's look at the numbers you have and see if that's realistic."

"If you're telling me that you want to have your revenue target be $50,000 for the month and your average order value is $139, I'm going to have to generate 360 sales for you to hit that number, at a 2% website conversion rate -- which is standard for E-commerce."

Q: Gotcha. It sounds like the answer to the question of how much should someone spend on Facebook ads is everyone's least favorite answer -- "It depends." If you were telling that to me, I'd be on the verge of throwing my hands up in the air, because I would have no idea where to start.

So, let's say I'm an eCommerce company -- what factors should I be looking at to figure out what my Facebook ad spend budget should be?

Ali: You need to know what the revenue is that you want to generate, what your average order value is -- because that's going to tell you how many you need to sell -- and then there are set benchmarks that you have.

So, if you're an eCommerce company, you're gonna be able to look in Shopify, or WooCommerce, or Google Analytics and understand what your site conversion rate is

Hopefully for you it's at a 2% or better.

If it's not, you should be looking at your overall conversion rate optimization, and see what's going on with your site if you're under, before you do anything else. And then that's going to tell you exactly what your cost per sale should be.

Q: What are some of the most common well-meaning mistakes people make when trying to put their Facebook ad budget together?

Ali: Most often, what we see is someone who is going to pick numbers out of the sky instead of looking at something like our calculator, where you're rooting it in actual data.

Also, it's good to swing big and have big dreams, but you have to make sure you're basing it in reality somehow.

So, don't overshoot it.

This is one of the biggest problems I see -- especially if someone is brand new to Facebook ads, and they're excited. They say, "Okay, I'm just gonna throw all this money at this right at the start," instead of scaling up.

You can absolutely spend those larger numbers, but you should be working up to it strategically.

Q: Well, if you could give someone like me -- enthusiastic about the potential of Facebook ads, but oh-so fearful of wasting my money -- a single piece of Facebook spending advice, what would it be and why?

Ali: You should still have a minimum threshold that you're comfortable playing with for your budget. I tell people, depending on their size, no matter what -- even if it's a solo business, even if it's a smaller business, -- don't go into this unless you're willing to spend a minimum of $3,000 a month ad spend and try to do real advertising on Facebook.

It's going to take some time to learn how much it will cost you.

This is the thing I've told you before where I'll go in and I'll see people say, "It's not working."

I'll look at what they're doing, and of course it's not working! They're targeting 4 million people at $5 a day. It will take nine months for you to get any metrics to work off of there.

So, be comfortable spending a minimum of $3,000. That will empower you to get the data you need, so you can help Facebook be smarter in finding new people and sales for you.