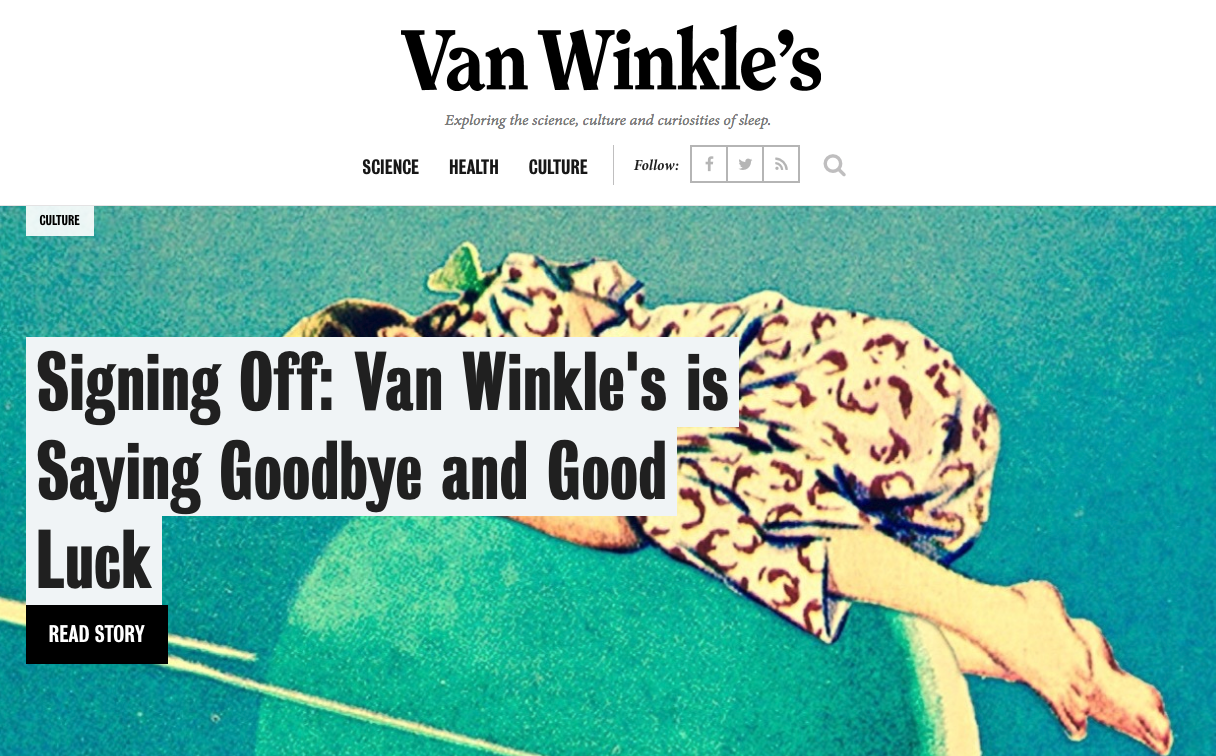 Casper is a mattress company.

In 2015, the Casper team felt optimistic about taking the leap into brand publishing with their own publication centered around sleep called Van Winkle's. And, at the helm as editor-in-chief, would be Jeff Koyen.

But by 2016, Koyen was out, and John DeVore (previously of the New York Post) was in. And by November 2017, despite dreams of generating revenue through ads through their brand journalism model, the entire publication shuttered. 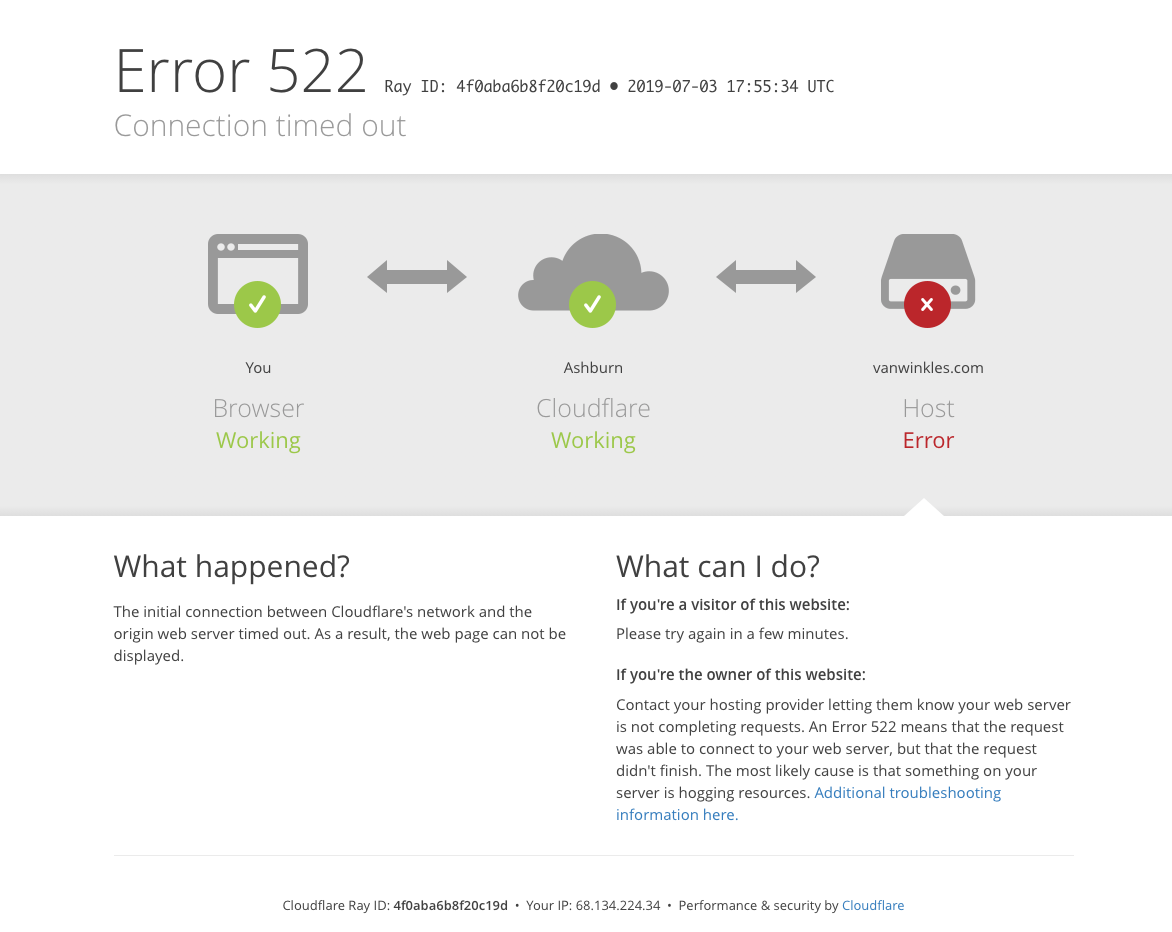 Why am I talking about a more than two-year-old brand publication death, as we look ahead to 2020? How on earth is this still relevant, right?

Well, recently IMPACT VP of Marketing Kathleen Booth shared an interesting take from Digiday about the demise of Van Winkle's, which declared the news a cautionary tale about the "limits of brand journalism."

"Like Casper, many brands have started their own online or print publications as part of their content marketing strategies: Airbnb has one called Airbnbmag (and before that had one called Pineapple), while Dollar Shave Club has built Mel as an independent publication focused on men’s lifestyle issues. Casper’s switch from Van Winkle’s to Woolly begs the question: How far can a brand take its media property? Media is a long game with few overnight successes. Many marketers, particularly e-commerce companies, are relentlessly faced on immediate conversion rates in their marketing. Media is anything but that."

Ever since I read it, I've wrestled with how much I agree with Digiday's take on Casper shutting down Van Winkle's.

We talk a lot about the importance of being a media company, and we've made the move to being a brand publisher ourselves. There are also scores of examples out there of brands who are able to make the brand publishing (or "brand journalism") leap and see long-term results and successes from it.

But, as Koyen pointed out in his conversation with Digiday:

“Building Van Winkle’s was a great experience. But the question is if that is a viable business pursuit. Generally speaking, being an independent brand publication is not going to work.”

It's a bit ironic that Koyen would be saying that given that, back in 2015, Casper co-founder Luke Sherwin said:

“… When you look at (start-up publications), typically they cut themselves off below the knee before they let it breathe and make money.”

So, was Casper's move to shutter Van Winkle's a sign that brand publishing is a fool's errand? Or is brand publishing still a viable strategy for brands with the right topic, strategy, and approach?

My gut says the latter.

For those of us on the publishing side of IMPACT, one of the things we talk about the most (and spend a lot time measuring) is something we call "building the habit."

What that means is we want to create a multimedia brand publication that our audience considers as an indispensable part of their day or week, if they care about digital sales and marketing.

So, we don't just measure traffic overall. We look deeply at the traffic for returning visitors, because we want to see growth in the number of people who keep coming back to IMPACT. We also look at pages per session, which simply refers to the number of pages an individual consumers in a single visit to our website.

But the only reason we have the luxury of even considering these types of metrics is because we have compelling subject matter, and our editorial calendar seeks to solve urgent, top-of-mind problems (or answer their questions) our audience has.

More to the point, there is a need for the type of content we produce.

The rules that govern the digital sales and marketing landscape is always changing, and it can be hard for business leaders and digital marketers to stay up-to-date, so they can grow their businesses and/or careers.

When I look at other profitable brand publications, I see a similar connection between a clear need within the market and what is being provided by that publication.

Adobe — which many of you probably know as the creative software powerhouse behind Photoshop, Illustrator, and others — is a great example of what I'm talking about, as Kathleen previously shared.

But as a refresher, Adobe is the entity behind CMO.com, the mission of which is:

“...deliver marketing insights, expertise, and inspiration for and by marketing leaders — all aimed at helping CMOs, senior marketers, and their teams become better marketers and deliver standout experiences in a digital world.”

What's even more interesting is that, according to an interview from a few years back, there was a very clear line in the sand drawn between Adobe and CMO.com — CMO.com would never be a demand generation play for Adobe. Period. But more on that later.

While CMO.com has a clearly established audience with a defined set of urgent needs, I'm not sure the same can be said for Casper's Van Winkle's publication.

Can You Build a Profitable Publication Habit Around a Niche Topic Like Sleep?

The internet has long since been scrubbed of what Van Winkle's once was, so my online "archeological dig" has yielded very little, in terms of visibility into what Casper's strategy was with it.

But with the help of the Wayback Machine Internet Archive — the internet equivalent of that girlfriend who will never forget the time you forgot her dog's 10th birthday — I've been able to find some ghosts of Van Winkle's past.

And I'm going to couch this with an admission that maybe I'm in a minority. Maybe what I'm about to say does not apply to others.

But as I was skimming through the "front page" of Van Winkle's from various times throughout its brief history (like the one above from June 2017), I couldn't fight a nagging feeling.

While sleep is inarguably important in all of our lives, how interesting would a publication dedicated entirely to it really be?

Of course, there are those in the academic and scientific fields who are very much interested in the topic of sleep, but there are already scores of academic journals and online publications that meet their need.

So, what did Casper's Van Winkle's offer that was different or compelling enough to draw in a broader or different audience?

From my perspective, sleep science and other related topics are interesting, but in a very passive way. I find it interesting when I come across something about sleep science linked on Reddit or referenced in a different publication.

But as I am not someone who studies sleep, nor am I someone who suffers from a sleep disorder, it's not something I'm seeking out on an a daily basis. And again, those who might be will probably look to other more industry-respected resources to answer their questions and solve their problems.

Then there's the matter of demand generation and the revenue relationship that is established between a parent brand and its publication.

As I alluded to earlier, Adobe's CMO.com brand publication property is considered a completely separate entity and is not expected to bring in revenue for the parent brand.

"It has been accepted for quite some time that CMO.com is not a demand-gen play. We are a content site, and Adobe has come to see our value in being that, in terms of connecting it to digital marketing thought leadership."

Although Casper set out with a similar mindset behind Van Winkle's, a perceived lack of traction in the world of brand publishing quickly enough created friction over time between the founders of Casper and the Van Winkle's staff.

“...despite the accolades, Van Winkle’s had no monetization strategy, and Casper’s senior management started questioning why they were producing the publication a few months after its launch, according to Koyen.

'Do those awards sell mattresses, or what is a Journal piece worth?' said Koyen. 'It goes back to the marketing problem that you can’t measure brand [awareness]. If you read an article on Pineapple and then book a room on Airbnb, I can’t prove that.'

Stats from social analytics firm Brandwatch show that online mentions around Van Winkle’s peaked at around 130 on Aug. 25, 2015, died down to around 80 on Dec. 15 of that year and then diminished dramatically afterward.”

In that same interview, Koyen noted:

“At the end of the day, brands are performance marketers. If you don’t deliver business results, they will let you go.”

Of course, there is speculation that Casper was never really trying to be a successful media publisher, but rather become part of the sleep science conversation at a brand — which they were able to do.

However — acknowledging that we don't know what we don't know about Casper's overall intent and buy-in with Van Winkle's behind closed doors — we can (at least superficially) infer that the differences between how Moran describes Adobe's perception of CMO.com and Koyen's characterization of Casper's feelings about Van Winkle's diminishing value point to a more critical issue in the world of brand publishing.

When brand leaders say they're behind a publication 100%, without a desire to make it a demand generation center for their products and services, do they really mean it?

The reality is that not all of them will.

Although, in the case of Casper, going to market without a monetization strategy for Van Winkle's is a great way to create a "no value-add" narrative for a publication right off the bat.

Bottom Line, Van Winkle's Is Not a Reliable Bellwether for Brand Journalism Success

Are there limits to brand journalism and brand publishing? Absolutely. You need to have the right niche topic, a well-defined audience, a basic monetization strategy to start, and a smart editorial team behind it.

But is the story of Casper shuttering Van Winkle's a sweeping indictment of brand publishing? Absolutely not.

(I am declaring with authority. Two years after the fact. Because I am, if anything, tardy to any and all parties.)

While I applaud the fact that Casper took such a risk, I'm not sure they had a compelling enough niche to build the audience habit every brand publication needs. And while they certainly went out of their way to hire the right people, not having a monetization strategy is a big red flag.

I'm sure we'll continue to see more success stories and failures as time goes on, but I hope that when the latter occurs, we do a more thorough post-mortem on why a publication didn't work.

By Kathleen Booth on September 2nd, 2019

By Kathleen Booth on September 2nd, 2019