He Said, She Said: The Demise of the Shopify + MailChimp Integration 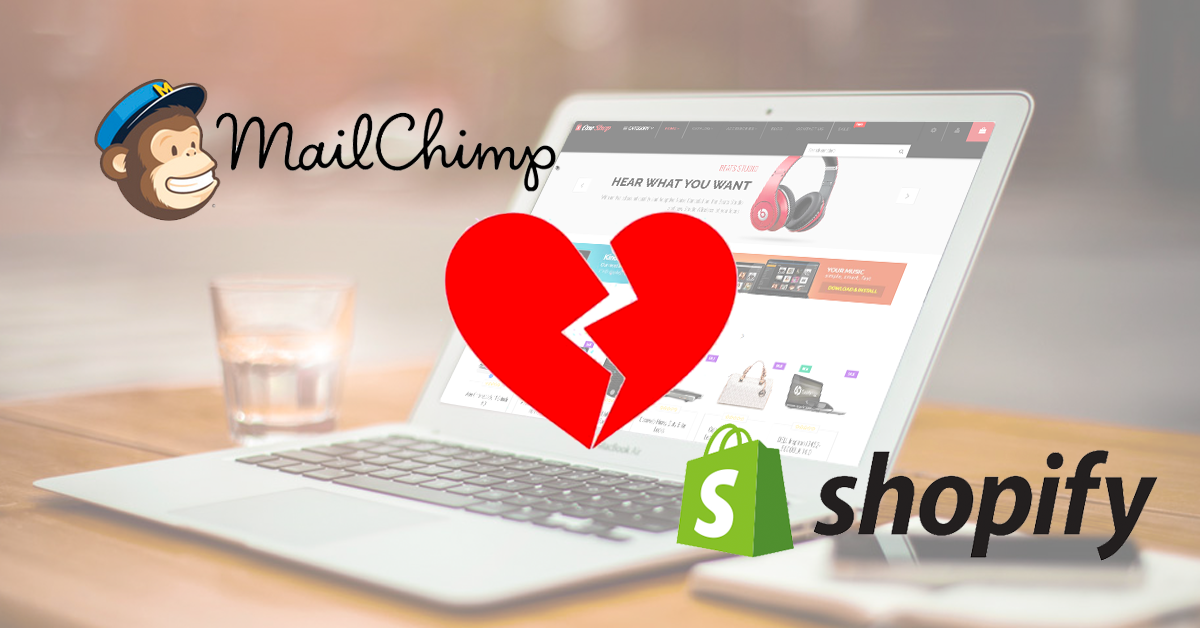 Both Shopify and MailChimp are well renowned and popular platforms in the eCommerce and marketing space today.

I am certain that if you throw a figurative stone into a crowd of marketers, the chances of hitting someone who uses one or both platforms is pretty high.

So, what happens when two of the most popular tools on the market get into a tiff and decide to no longer integrate?

Well, that is exactly what is happening as we speak with Shopify and MailChimp.

It might seem like no big deal to some, but for those who rely on the two apps passing information back and forth to keep their business running smoothly, it may feel devastating.

Read on for details on the “breakup” and how I foresee this impacting the marketing world.

On Friday, March 22, 2019, both Shopify and MailChimp made their relative announcements about the demise of their integration.

According to Shopify, the split is due to MailChimp’s refusal to respect their Partner Program Agreement which requires app partners to share all important data back to the merchant using Shopify’s API to help them run their business.

It was explained as such in their online community last week:

“It’s critical for our merchants to have accurate, complete insight into their businesses and customers, and this isn’t possible when MailChimp locks in their data. Specifically, MailChimp refuses to synchronize customer information captured on merchants’ online stores and email opt-out preferences. As a result, our merchants, other apps, and partner ecosystem can’t reliably serve their customers or comply with privacy legislation.

We will never put our merchants’ trust on the line like that. The data captured on behalf of our merchants belongs to those merchants, it’s as simple as that. MailChimp was not willing to agree to these terms. That’s why MailChimp has been removed from the Shopify App Store.”

MailChimp’s side of the story differs, of course.

According to their public statement, also released on Friday, March 22, they were the ones who pulled the plug on working the integration relationship citing Shopify’s release of updated to terms that they feel would negatively impact their business and put their users at risk.

“For months, we’ve been trying to work with Shopify on terms that would be fair and equitable for both of our businesses. Throughout these negotiations, we refused to agree to terms that jeopardize our users’ privacy and require us to hand over customer data acquired outside of Shopify. From our perspective, that's not our data to share.”

I imagine that, in the eyes of the consumer, this simply seems like a “he said/she said” game of finger pointing, which it absolutely is.

At this time, there are no further details available and we will just have to wait and see if these two companies can play nice, for their customers' sake.

What Does This Mean for the Marketing World?

As marketers, we are all too familiar with the concept of cross-platform data integration.

Whether we’re trying to pass data from one third-party tool to another or simply keeping our database(s) updated internally, things can get kind of squirrely when you are trying to get applications to communicate.

That is why custom integrations like the one being shut down between MailChimp and Shopify, are so helpful.

According to Mailchimp, part of their request when the two parted ways was for Shopify to leave the integration active on existing connected users’ accounts through May 12th when the data sharing provision of Spotify's new terms take effect.

At this time, it is unclear if Shopify has agreed to those terms, however, I can’t imagine they wouldn’t. It is in both party’s best interest to make the transition as smooth as possible for their shared users.

Next Steps for Those Affected

If your company is one of the users this change affects, MailChimp has provided a couple of alternative solutions and workarounds to keep your data flowing.

With these two companies feuding and no positive outcome in sight, I would suggest jumping in and getting things converted sooner rather than later to ensure no downtime for your company.

Additionally, it's always a good idea to stay in the know about any and all companies, tools, and/or applications you use.

Visit their websites and sign up for their newsletter or join their online community.

You never want to be caught off guard if one day a business-critical application you and your team rely on is gone, an integration no longer works, or a tool has been sunset.

Being proactive in this area will set you up for success.