Could Ads Be Coming to Google Voice Assistant?

Whether you love them or hate them, voice-controlled home assistants are here to stay.

Many digital marketers have agonized over what this means for SEO - but what about for paid search ads?

Think about it: if more and more people are using voice-controlled devices for search queries, that effects the number of people who see your paid ads, which eventually could impact the ROI you see from these efforts.

Well, Google seems to be testing out a solution for this by showing ads directly in voice-initiated results.

Twitter user Gennaro Cuofano recently shared a voice search he made on his Android phone using Google Assistant that included a sponsored ad pop up as the main result: 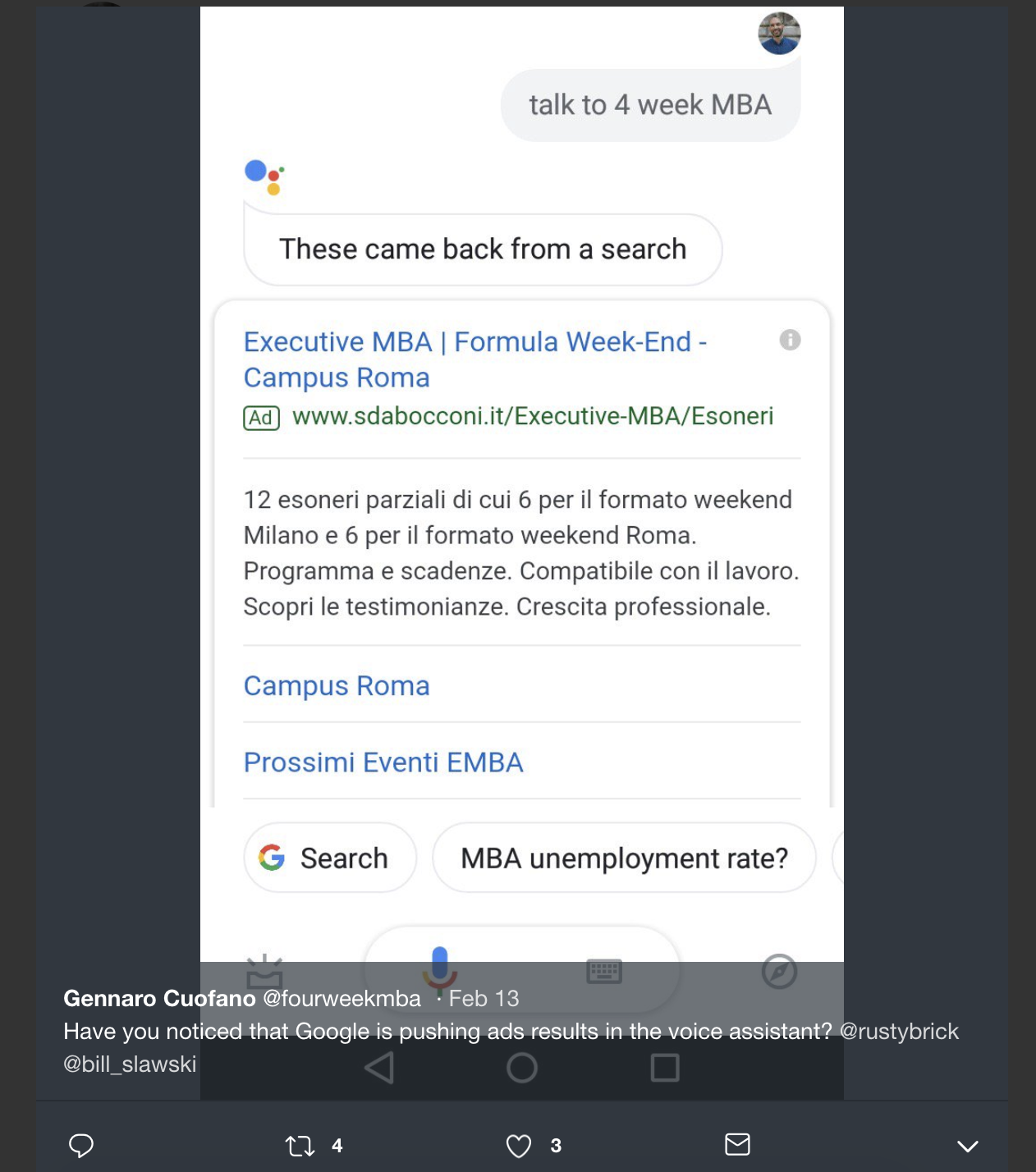 As you can see from his screenshot, the user is shown just one ad, with all other organic search results below the fold.

The Twitter user that shared this post reported that “The answer on the voice assistant pretty much mirrored the search result page on that one.”

Interestingly, others have tried to re-create this function using Google Assitant on their own devices but were unsuccessful in their efforts. This has led many to assume that this instance was a test by Google, and they have not fully rolled out this feature to all users.

After this news broke earlier this week, it stirred up quite the buzz among marketers. So much so that Google actually provided a statement regarding this story, stating:

We’re always testing new ways to improve the experience on phones, but we don’t have anything specific to announce right now.

Quite honestly, their statement doesn’t necessarily clear up any confusion around the future of Google Assistant ads - but it goes show that this was not a bug that one user encountered.

While Google did not formally announce any plans for further development, we can expect them to continue testing out the ad experience on Google Assistant, making tweaks until they’re planning on rolling out the final feature.

Why Should Marketers Care?

This news seems minor at first, but I believe it’s a big tell to where we’re headed with voice-controlled search options.

Google Assistant is on over one billion devices, so it was expected that, at some point, ads would be shown to users.

The interesting part is how these changes will affect marketers SEO strategy - both paid and unpaid.

It’s highly doubtful that Google will eliminate showing organic results entirely using it’s Assistant, but it’s something for marketers to pay close attention to as they’re developing their PPC strategy.

In some cases, it might be worth it to invest in PPC ads to see if your impressions and clicks spike due to being shown first in voice searches.

Additionally, if this structure remains, this also signals that a top ad position can now be more valuable than ever. Assuming that the first position would be shown, these ads will gain significant visibility on Google Assistant devices, which is a huge advantage.

If this is the case, we can expect it to be more competitive (and expensive) than ever to reach this top position.

Above all, this experiment shows that these platforms are looking for ways to monetize their voice search queries - and marketers should stay on top of developments to stay ahead of the competition.