11 Companies Banking Off Original Content (& How You Can Without Billions) 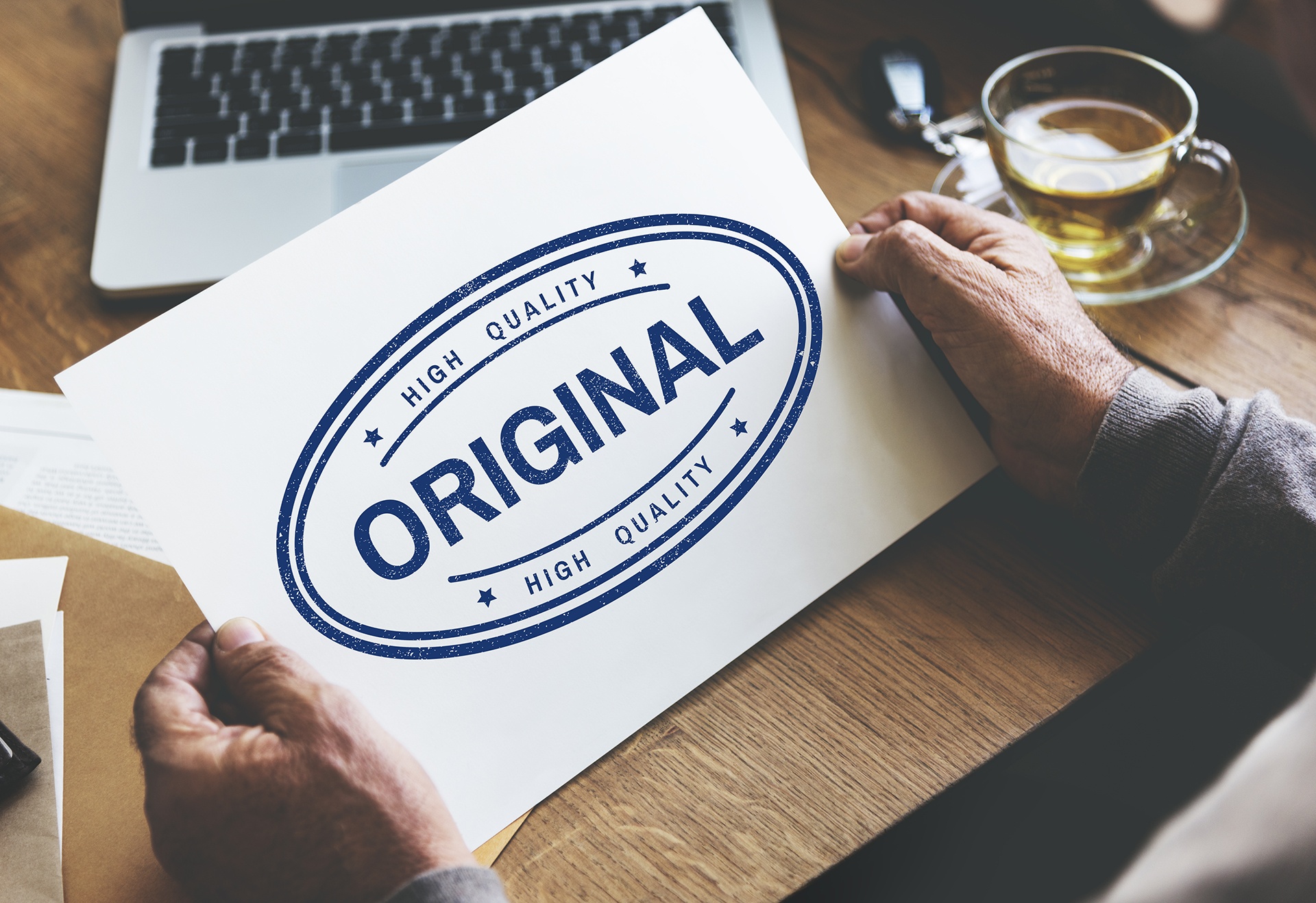 Over the last few years, original content has become the cornerstone of successful marketing campaigns, from household names to niche businesses. Heck, we’re creating more than ever!

It’s not too much of a stretch to see why - people crave originality and hate being sold to.

Once the internet became a thing, the amount of effort required to reuse content dropped significantly and it gave birth to the repost.

With Pinterest, Tumblr, Buzzfeed, and more growing almost entirely out of sharing others’ content, it’s getting harder and harder to find original content in the mix.

The amount of effort required to post someone else’s work and get some credit for it is far less than the effort required to create your own content. But it’s just not as meaningful or lasting, doesn’t create any differentiation, and doesn’t foster a relationship.

Before I go any further, let me explain what I mean by original content: it’s content that is brand new, that you created, and that doesn’t already exist. It can take any form, written, video, audio, live - but it has to be new and unique to you.

Original content used to be the playground of the big boys - radio shows and TV shows come to mind for me, but then YouTube came out, and every person with a video camera or smartphone all of a sudden has the capacity to produce excellent quality videos.

Since then, the barriers to creating original content have lowered and the market for it has increased substantially. The tools available for individuals and businesses to produce better content have blossomed as well.

While companies like Netflix or Apple can invest millions (or billions) in creating original content, I’m telling you, you can leverage the same trend to fuel your own small or medium-sized business online.

How? Let’s look at some people doing it well so far and I’ll explain:

No surprise here. The tech giant just dropped a billion dollars into creating original content in the next year. It’s necessary to keep up.

As The Verge explains, “Apple previously focused on renting TV shows and movies through iTunes, but this business has been damaged by the rise of subscription services.” If Apple is going to continue to capitalize on the new media market, original content that isn’t available on any other platform is a must -- especially since it has competitors like:

After all, Zuckerberg has been spouting video as the holy grail for a while.

Another brand that grew to fame sharing content created by others, Netflix found its way when it began investing in creating original content back in 2013.

From House of Cards to Orange is the New Black, many of these exclusive shows, documentaries, and movies are what keep subscribers coming back, rather than those they can easily rent from elsewhere. They have also earned the platform an impressive number of awards and recognition for its diversity.

While not as strong a player as Netflix, Amazon has also introduced its Prime audience to fresh original content and seen some strong growth.

While Amazon Video’s original content didn’t hit it big until shows like Bosch, Transparent, Downton Abbey, and The Man in the High Castle took off, which are moving into their prime seasons, it has earned many accolades.

It’s accessible through a normal Prime subscription (estimates are around 80 million for total Prime users), but also through a standalone video subscription. Exact numbers are difficult to pin down, but the best determinant of success is that Amazon is continuing to produce original content.

As mentioned earlier, just because a company is smaller doesn’t mean it can’t see growth from original content -- and even make money from it. A great original content strategy, whether it be written or visual, can help businesses create new, reliable revenue streams, especially if implemented properly.

River Pools has a fascinating success story and if you’ve been in inbound for a while, you may have heard it.

Things were going poorly for the company - this was right after the financial crisis of 2008 - because people weren’t buying pools. In an economy like that, who could blame them? So Marcus Sheridan (a partner in the company) started creating content, answering a question he heard from every single potential customer: How much does a fiberglass pool cost?

Nobody had answered the question online up until that point. He was in a deep, blue ocean, and from that single blog post (which took him 45 minutes at his kitchen table to write) River Pools was able to generate over $3 million in revenue.

There’s definitely more to the River Pools story, but that’s the main point.

As Marcus grew River Pools, lots of people asked him questions. They were mostly about pools, but some of them were about how he had achieved a phenomenal amount of growth in a short period of time. He realized this was another potential business, and started The Sales Lion (TSL).

Fast forward a few years, and TSL has become a world leader in sales, marketing, and video workshops, speaking, and consulting - not to mention a HubSpot Platinum Partner.

The team has tripled down on original video content - answering the questions members of the team get on a regular basis in short videos that are easily digestible.

And it’s not just video - Marcus and George also create and produce the HubCast, a podcast specifically aimed at HubSpot partner agencies, customers, and businesses in the inbound world.

Aside from creating phenomenal audio, video, and written content, Marcus has published a book, They Ask You Answer. You bet it’s providing a reliable revenue stream, as well as a lot of clout to help The Sales Lion close new business, speak at more events, and grow as a HubSpot partner.

One of the first well-known companies to embrace inbound many years ago, Yale Appliance (now an IMPACT Client) has created an enormous amount of content since then and still ranks in the top spots when searching for premium kitchen appliances.

They generate millions of visits a year by sharing content on a regular basis that keeps up with the industry. Every month, appliance manufacturers create new products, upgrade old products, and retire older products. Steve and the team at Yale Appliance is all over that - producing original content around reviews or ratings, cost, and issues, amongst other things.

You’d think talking about advantages and disadvantages of products you sell would be shooting yourself in the foot - but that couldn’t be further from the truth. Some of the most engaging content talks about the most and least reliable brands for appliances. This allows Yale to build trust with prospects before they even come to the showroom.

The main reason this worked is because Yale Appliance adopted content creation into its core culture. If you work at its Boston showrooms, chances are you’ve appeared on a video, written content for the blog, or had a hand in helping to produce those.

Digital Marketer (DM) has probably the most self-explanatory name on this list. It specializes in creating, sharing, and educating marketers with up-to-date tactics and strategies in the digital marketing field.

It has a podcast, a phenomenal blog, a huge network of partners, and a great list of small and large products to help businesses grow. How did they get there? With original content. It monetizes all of this by offering its content in an invaluable monthly subscription course. Its Customer Value Optimization model is becoming part of the core of what we do here at IMPACT.

Moz is a company that sells SEO tools, products, training, and consulting services, but that isn’t how it started. Moz was actually one of the first digital marketing websites I ever found (organically of course), and I quickly bookmarked it because the content I found was so valuable, and the presentation so clear.

Today, Founder Rand Fishkin creates a new Whiteboard Friday every week. It’s a less-than-ten-minute video that talks about important changes to SEO, tactics, and other stuff you should know. It’s worth the watch if you don’t already.

Moz has grown quite a lot and offers a ton of free tools that can educate marketers, make them savvier, and then give them a reason to purchase a premium tool.

Casey Neistat lives by a certain philosophy: do what you can’t. It’s powerful because he was always told he couldn’t do the things he wanted to do because he had no money, or he wasn’t good looking (no really, watch that video).

All that changed once Casey started vlogging. It was a daily ritual to create a video, share it with an audience, and just have a good time. Eventually, he was able to meet others creating original content on YouTube, motivational speakers like Gary V, and many more.

Today, Casey is a well-known name in film, TV, and advertising, directing commercials for brands like Samsung, Nike, Google, and Mercedes. It all started with a video camera and YouTube, and has turned into his life, full-time job, and inspired many others to do the same.

Sophia Amoruso, former founder and CEO of Nasty Gal, is a well-known entrepreneur and author these days, but she didn’t just wake up one day and do that.

She started with humble beginnings: eBay and MySpace. eBay helped Sophia sell fashion products under the Nasty Gal name and MySpace helped her connect with her customers on a personal level and provide personal advice/style tips.

This helpful content and brand made Nasty Gal into a billion dollar organization. While the company has since been sold and she has stepped down as CEO, Amoruso’s rags to riches story (which she shared in the book #Girlboss) has inspired millions across the globe and opened many doors.

Today, Amoruso is at the helms of Girlboss Media. Amoruso calls it “a platform focused on redefining success for a new generation of women.” And it’s built entirely on creating original content including blog articles, a podcast, and videos.

What You Do Next is What Matters

So, why did I share these stories? Because you can do this too.

Creating original content isn’t easy, but it’s incredibly rewarding. Every single individual mentioned in this post has had a lot of FUN creating something new, and sharing it with their audience.

The hardest part is starting.  If you’re looking for a better way (and a formula) to leverage original content to grow a business (or even without a business), look no further than the steps outlined in Content Inc, by Joe Pulizzi:

Learn more about that here!

11 things every B2B content marketing plan must include in 2020