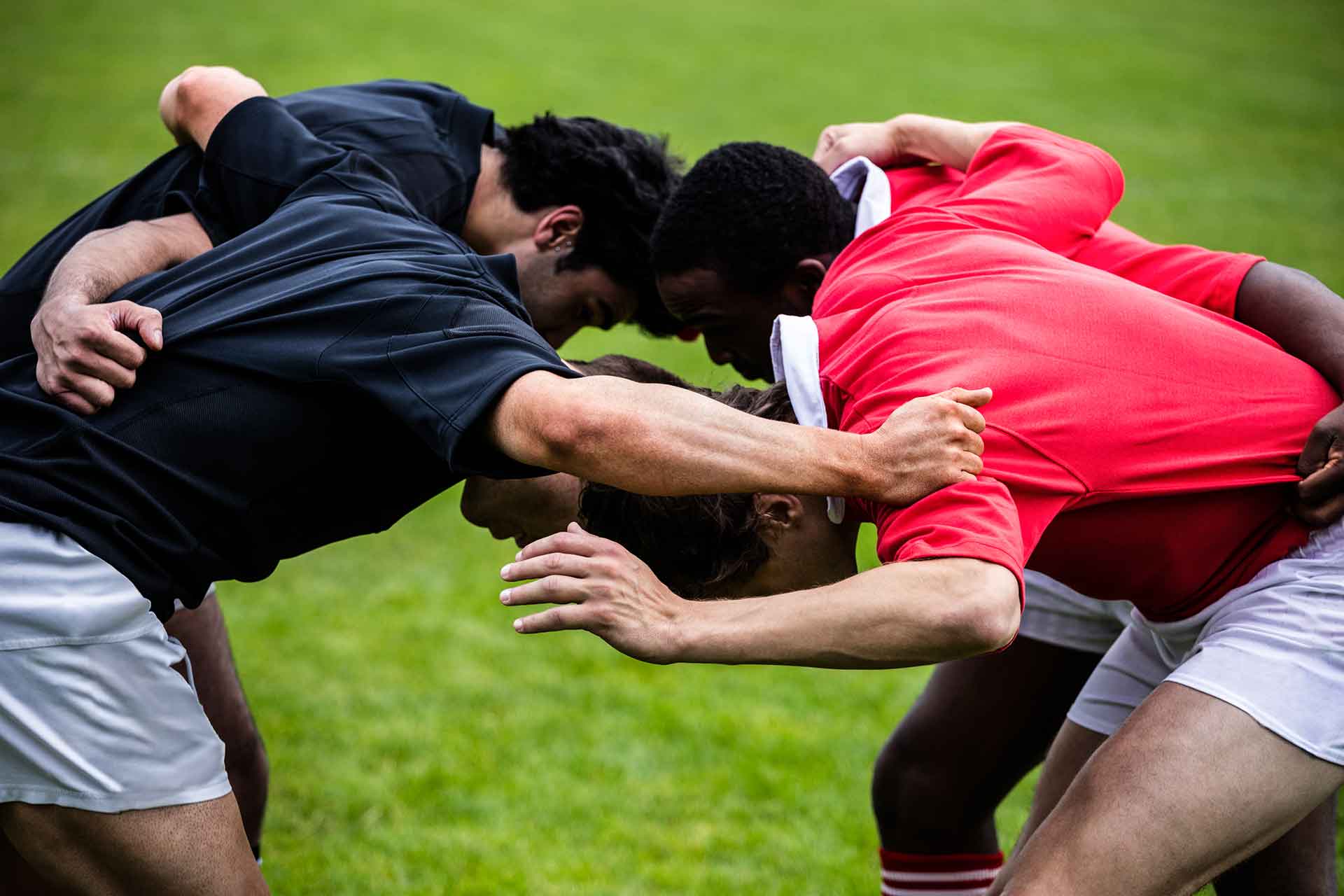 When I was in college studying athletic training (gasp!), I spent a semester working with the Penn State Rugby team. One of the most fascinating aspects of the sport is the scrum.

During the scrum the entire team comes together, every different position, arm-in-arm, to move towards one goal: moving forward and getting the ball.

Little did I know that a few years later I’d be implementing a framework that was named after this simple rugby play, let alone in the inbound marketing world.

So, what do rugby and project management have in common?

That’s something I’ve been learning since we started using the Scrum framework here at IMPACT, and what I want to share with you!

Here’s another new project management style that’s says it’s going to solve all of our problems, but will it just be another trend that will be replaced by something else in a few years?

Now that we’ve implemented Scrum on our client services marketing team, I’ve learned a lot. And I’ll be honest with you, I’m now a total Scrum junky. I think you’ll see why.

Developed by Ken Schwaber and Jeff Sutherland in the 1990s, the Scrum framework is an approach to managing complex projects.

The duo used it to manage software development projects separately, then  came together to combine their experiences into a paper, which ultimately led to authoring books and developing training programs for teams.

The name Scrum was inspired by the rugby practice of having cross-functional teams come together to get something done.

Although it was initially created for software development projects, since its inception it has been utilized on all kinds of different teams, from car manufacturers to marketing teams!

If you’re interested in learning more about Scrum and its processes, there are lots of resources out there. You can check the Scrum Alliance’s Scrum framework in 30 seconds for a quick overview, but if you are seriously considering implementing Scrum on your team, I highly recommend reading Scrum: The Art of Doing Twice the Work in Half the Time by Jeff Sutherland.

My purpose here, though, isn’t to teach you about the details of implementing Scrum. It’s to tell you about the lessons I’ve learned on a team that uses Scrum to get stuff done.

Here are some of the many lessons my team and I have learned since starting Scrum six months ago.

1. You don’t need to plan every detail before taking action.

You spend all kinds of time thinking through everything you will need to do to get a project done. You plan out each phase that needs to happen and how long each will take. You make a really nice chart of how it’s all going to work.

The only problem is, how often do those plans ever come to fruition? How often does a project go exactly as planned? In my experience, never,  Usually when something goes wrong, or an issue comes up, the entire plan has to change or get put on hold.

All that time that was spent in initial planning is wasted or at the very least your project is delayed.

These situations would often happen on our marketing team.

We’d plan out everything we were going to do for the upcoming month and feel great about it.

However, as time progressed, more and more things would come up. There was always something; whether a client had to shift priorities, a change of heart, or an opportunity to do something more valuable came up.

All of the planning we did at the beginning of the month was no longer useful, and we had to start from square one. With Scrum, however, expecting the unexpected is built into your process.

Every day is a chance to pivot to whatever is most important and changing plans is expected rather than being an inconvenience. Sounds pretty great, right?

It is! When you expect that things will happen that you just can’t anticipate beforehand, it sets the whole team up to be able to change plans quickly and efficiently and saves you hours of planning time on the front end.

2. Your team needs to be the problem solver -- not the methods you use.

Often times when new methodologies for project management or other processes come along, it’s easy to want them to solve all of your problems.

When we were preparing to go Scrum, I’d hear people say things like “With Scrum, that won’t be an issue.” or “When we start Scrum, we won’t have that problem.”

Well, that’s not really true. It’s not that using Scrum stops problems from occurring or things from going wrong, it’s that Scrum enables you to solve the problems you have quickly and effectively as a team.

This is actually one of my favorite parts of using Scrum.

When a problem arises, it’s the entire team’s problem, and the entire team must come together to find a solution, no matter what their role or position.

This took me back to the image of the rugby scrum - every person, in every position, coming together to move the ball forward. That’s what it is!

Scrum gives you a structure to make continuous improvements.

There are daily and weekly “ceremonies” (a.k.a. meetings) where the team constantly asks each other questions like, “What did we do well?” “What could we have improved on?” and “What are some action items that will help us overcome this problem?”

Problems are quickly put out in the open, discussed, and the team works together to find an effective solution. It’s a beautiful thing.

When you and the rest of your team take ownership for everything that happens within the team, everyone is empowered to jump in to help solve problems. There’s no blaming others or blaming the system, only working to solve whatever problem has arisen.

3. Sacrificing small amounts of time for communication saves you time in the long run.

One of the core rituals of Scrum is the daily standup.

Your team gets together every morning for 15 minutes, and everyone says:

When I first heard about this, I thought it sounded ridiculous. Every single morning? Isn’t that a little much?

The answer is no, it isn’t.

Daily standups are effective for a few reasons. First, they keep the entire team on the same page with what is being worked on. Second, everyone on the team sees what the impediments are to the team moving forward and can solve them on the spot if possible or be prepared if they can’t be.

Lastly, it allows the team to gauge what progress has been made and where everyone needs to pivot to make sure that everything gets done.

In the long run, these standups actually save time. Taking 75 minutes out of your week could save your team hours of time making up for a lack of initial communication.

Being able to do more than one thing at a time is often viewed a positive, but on Scrum teams it’s not.

There’s some great research out there about why multitasking doesn’t actually allow you to get more done.

With Scrum, you work on one thing at a time until it’s done and sent to another team member for review. This keeps things moving for the team, maintaining a steady flow of tasks through internal review and acceptance rather than big chunks all at once.

If anyone has a task that’s dependent on something you are working on, it also ensures that you will get it done as quickly as possible to allow them to work on what they need to.

Full disclosure: I broke this rule while I wrote this post, and I feel really guilty about it. And yes, it did slow me down. Phew. Glad I got that off my chest.

5. Your Success = Team Success. It’s all or nothing.

Scrum is all about the team. It doesn’t matter if you got a lot of work done this week if your team didn’t. You rise and fall with your team.

While this can potentially be frustrating, it motivates everyone to do what they can to help each other and also provides comfort knowing that success is not solely your responsibility.

With traditional project management, I would have felt terrible, but with Scrum, productivity is redefined in the context of the team. Even if I didn’t contribute as much tangible work as I usually do, I contributed in other ways that led to our team overall having a great week.

In reverse, if I have a really “productive” week but the rest of my team hardly gets anything done, there’s no celebrating for me because my personal velocity doesn’t matter if the team’s velocity doesn’t follow along.

This motivates me to make sure I’m helping solve not just my own problems but the problems of everyone on the team.

This is a tough one.

Have you ever started working on something and realized halfway through that you don’t have everything you need to complete it, or you need someone else to finish what they’re working on before you can finish?

Work can get stuck in this middle ground indefinitely, and it slows you down as well as the team. To avoid this, Scrum uses a term called Acceptance Criteria, which defines exactly what needs to be completed in order for a task to be marked as Done.

If there isn’t clear acceptance criteria on something, or you look at it and realize that you don’t have everything you need to actually get it done, you don’t start it.

Utilizing the Scrum framework has done some amazing things for our team. From increased team productivity to better communication to increased happiness, I can safely say that Scrum has made our team better on many levels.

Here are just a few specific ways Scrum has improved our team:

These lessons are just a few of many that we’ve learned, and I know that there will be many more to come. Have you been on a team that uses Scrum? Let us know what lessons you learned in the comments below!

You Can't Be An Agile Marketer Without This One Tool.

Discovering the Right Agile Marketing Tool for Your Team

How Agile Can Help Your Creative Team Get Into Ship-Shape