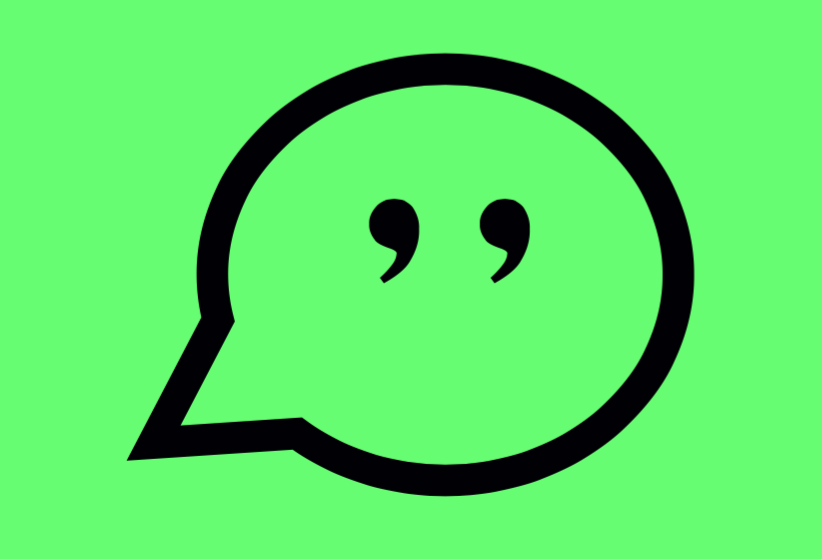 I mean, it has the ability to transform your marketing efforts if you know how to play your cards right.

But that's just the thing. Many businesses and brands simply don't know how to approach it and approach it right.

They've managed to make a few accounts, they're trying to pick up on the type of content they should be posting, but they're lacking direction.

Which is why I've turned to some expert social media quotes to help steer businesses back on track so that they can produce the type of results they (and their bosses) want to see.

“Too often, feeling intimidated becomes our excuse not to be awesome.” - Scott Stratten

In order to be see a return from social media marketing, you actually have to start being social.

While social media feels second nature to Millennials, for many businesses it is a totally foreign concept. For those who have had no experience with the different platforms, it can be difficult to get behind the approach and begin to understand the advantages of building up a presence.

Many businesses hesitate simply because they're intimidated by the process of learning how each platform functions and how to incorporate social interactions into their campaigns. They struggle to see the value, and fail to realize that their skepticism is holding them back from an opportunity to build their brand, expand their reach, and cultivate new relationships.

If you, your CEO, or your team is on the fence about piecing together a social media strategy, consider this the push you need.

“Social media is not just an activity; it is an investment of valuable time and resources." - Sean Gardner

It's not about setting it and forgetting it, but rather putting forth compelling posts and building a following that actually means something.

You have to be willing to invest time into your interactions because a worth-while following doesn't take shape over night, and neither does the content you post.

You must take the time to listen to what people are talking about and how they're talking about it. Through careful observation of other businesses and brands you will find that you can reference their successes and failures in order to create a more workable strategy.

“Consistently investigate what gives other people energy. Be the fan that fuels it.” - Darren Rowse

While it's easy to follow the heard on social media channels, it's just as easy to have your posts get lost in the noise.

The beautiful thing about social media marketing is that it's easy to uncover what's working and what's not.

Are you posts getting clicks? Are they driving traffic back to your website? Are the getting people to convert? Are people sharing them? Liking them? Commenting on them?

Tools like HubSpot's Social Inbox, HootSuite, and Google Analytics make it simple for marketers to investigate what people are responding to in order to better determine what they should post in the future.

Successful social media marketing strategy are rooted in analytics and new discoveries, so rather than follow, you must learn to stand out.

"It's not just about consuming content, but sharing it, passing it on, and adding to it." - Arianna Huffington

While there is a ton of valuable content up for grabs, you shouldn't just take what you need and carry on. Social media marketing is about much more than just pushing out content and pulling what you need.

The businesses and brands who see the most success are the ones who show their support of others by sharing content that they recognize as valuable and relevant to their audience. They don't just retweet, but rather they add to the conversation by providing a bit of their opinion or feedback before they share it.

Anyone can hit the favorite button, but someone who attaches their stance to a piece of shared content reveals that they have taken the time to read through it and formulate their own opinion.

"What happens in Vegas stays in Vegas; what happens on Twitter stay on Google forever!" - Jure Klepic

We've all heard our fair share of social media horror stories by now. You know, the your friend told you about the new intern accidentally posting a drunken Tweet to the company account, or that time someone at StubHub posted this: 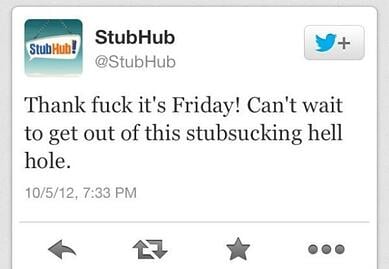 Make sure that you aren't placing the power of social into the hands of someone who isn't well-versed in the software you're using, the intended tone of your business, or the overall goals that you are striving to reach.

Mistakes are going to happen, but there are certainly ways to lessen the odds.

Point being, reread your posts, be conscious of your grammar, evaluate your tone, and make sure everything is where it needs to be to perform the way you want it to. While something like a grammar mistake might seem like a petty crime compared to the StubHub incident above, it's important to be mindful that nothing dies on the Internet.

Earn the trust of your following by making a conscious effort to keep close tabs on the quality of the content you are posting.